Australia wrestled their way back into the game and Steve Smith looks likely to make England pay for their mistakes, writes Will Macpherson from Day 2 at the WACA in Perth.

It started to feel unthinkable, some time about 90 minutes into the second morning, that England would end the day with their first innings total chipped away by half and their control of the game slack. But that’s what’s ended up happening; their position is still strong but, with Steve Smith in vintage form and Australia just three down, a memorable period of dominance felt an increasingly distant memory.

Way back then, Jonny Bairstow and Dawid Malan’s quite brilliant fifth-wicket stand of 237 was just knocking off records and Australia were looking increasingly tired. Both had centuries, Bairstow’s toasted with a hilarious headbutt of his helmet, which had long been planned. It was his fourth Test ton, and first in the Ashes. It was immediate reward for England’s decision to move him to No.6, where he should have been all along.

“It’s something that as a boy you really want to do.” ?

“You can’t go around headbutting everything!” ?

It was also the high-point of that superb early period for England, who looked on for a total north of 500. But then they collapsed again, as they always seem to. In the first innings in Brisbane, they lost four vital wickets for 24 and in the second dig it was the last five for 40. In Adelaide, they lost seven for 64 to end the game. They were even doing it against kids in the tour matches. At Adelaide Oval they lost their last five wickets for 22 in the first innings, then the first seven for 45 in the second. In Townsville, the tumble was five for 38. Luckily this time they had some credit in the bank before the collapse.

Malan set it off with a miscued tonk of Nathan Lyon. He had played Lyon beautifully – far better than he had in either match so far – and earned the right to go after him. He just played the shot badly. More culpable were Moeen Ali, who edged limply, and Chris Woakes, who contrived to be caught in the deep. Mitchell Starc came back to get the tail and Bairstow was intent on kicking on, and was bowled. 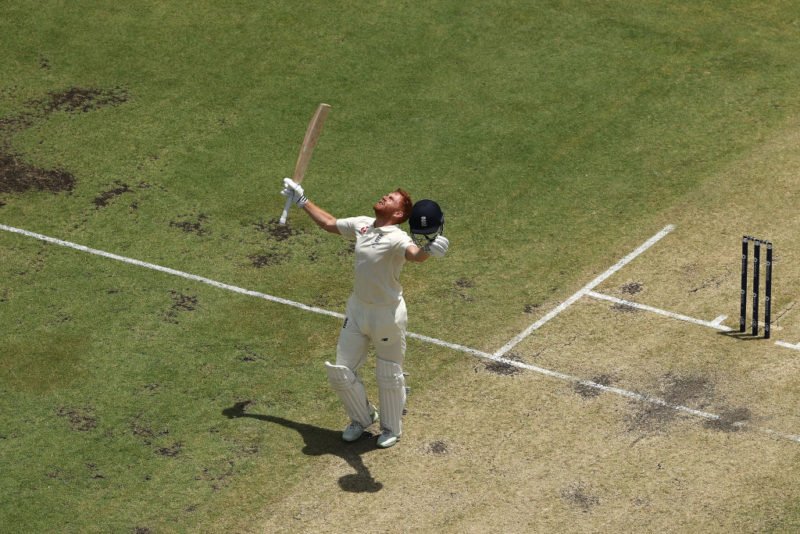 Bairstow celebrated his hundred in style

The last couple weren’t going to last long, but it was always going to be hilarious; Stuart Broad’s swipe over the scoreboard, with the square-leg umpire’s toes in severe danger given the distance he was backing off, will live long in the memory. Anyway, we can add six for 35 to the collapsing charge sheet. On the first evening, Malan had spoken about a big first hour, and they had negotiated that. But he had also spoken about being ruthless, and they certainly weren’t. 403 was a fine total, but Australia were in the game. 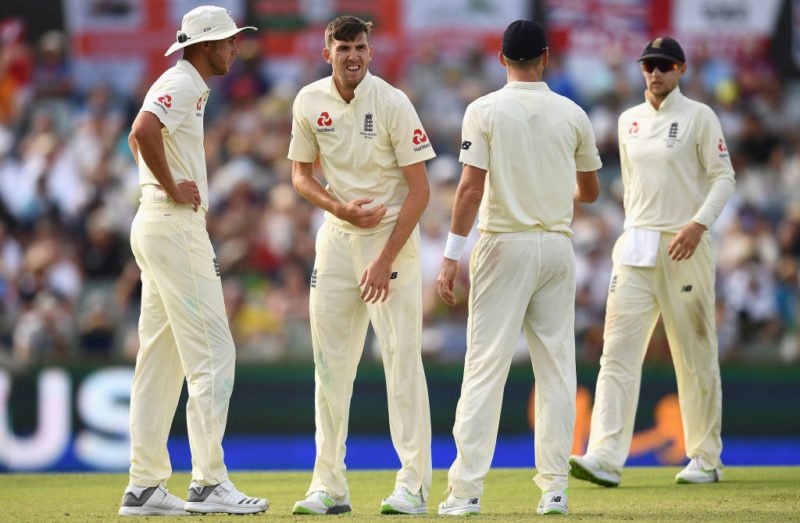 Australia stuck on 40 for the first wicket, and then Craig Overton came on. He had David Warner caught behind from round the wicket, then Cameron Bancroft lbw on review in a classy eight-over spell. Trouble was, he hurt himself in the process. The rib that took a battering from Pat Cummins in Adelaide was achey again after he took a tumble trying to catch Usman Khawaja off his own bowling. He may well find himself having a scan.

Khawaja was scoreless then, and had 28 when he nicked Woakes straight through second slip, and Joe Root failed to pick it up. Four runs. His was an edgy sort of innings, which ended in the tightest of lbw reviews. Woakes, who had improved after a very poor start, was the worthy bowler.

Smith had long since set off. Overton caused him a little trouble early on – he was squared up first ball and hit on the grille via the glove with the second session’s last ball – but was otherwise superb, and far more fluent than his century in Brisbane. After gains against him in Adelaide, this was a step back for England’s battle with Smith. A 22nd Test century surely waits, and the rate he’s going, it will not take him long or be the innings’ final stopping point. The bloke is rampant, and ravenous.