Editor-in-chief of Wisden Cricket Monthly, Phil Walker, on an Ashes hundred that Rory Burns will have with him for the rest of his career.

After all the pre-match talk of ultra-soft underbellies, England’s batsmen gave a pretty sound impression of a hardened top-six across an absorbing bout of old-world Test cricket dominated by the guts and fortitude of Rory Burns.

They will resume on day three 17 runs adrift with six wickets in hand, with Burns unbeaten and Ben Stokes, who played supremely in the last session to see off the swinging old ball and blunt the shiny new one, picking up on 38. While Australia’s bowlers will be baffled by the paucity of their rewards, and their magnanimity towards Burns may be stretched by the cold, hard details of 38 play-and-misses and 29 edges, this is not the time for balance or caution. Today was one for the romantics.

Burns has spent a lifetime pushing whatever talent he has as far as it can go, alighting and refining as he goes.

While we get carried away, Burns will allow himself a wry smile tonight as he casts back to last month, to a time when England’s light blue brigade were taking over the world and he was scavenging for runs in county cricket. Going into the first Test of the summer without a first-class fifty in two months, in the midst of a dry patch for the first time in half a decade, he made 6 and 6 against Ireland’s seamers, nicking off twice to the keeper. It wasn’t pretty, though it rarely is.

He looked, to most eyes, like a batsman in crisis. Moderates spoke of dropping him for his own good, in the hope of a return some time down the line. Others were less charitable. When Messrs Atherton, Hussain and Lloyd came to pick their XIs for the first Ashes Test, none kept faith with him. It must have been a close-run thing, and yet on the morning after the escape before, when England’s selectors announced their squad for Edgbaston, Rory Burns was in it.

It worked: where at Lord’s he’d seemed skittish, at Edgbaston he was imperturbable.

Last winter, before the start of a Test match in Sri Lanka, Burns had a net that was so bad it was funny. Those who were there, including one or two in England coaching garb, were a little taken aback. Here was an England opener, new to Test cricket, on the back of five successive 1,000-run seasons, hitting them like a busted arse. And yet later that morning he walked out to take guard, twiddled his bat a few times, and punched and swept his way to a rattling half-century on a tricky pitch to help England win the match. One of those coaches has since remarked that he’s perhaps the most mentally resilient player he’s worked with.

He’s certainly not the kind of bloke to get too wound up. The points he feels he has to prove are only to himself. The outside world can think what it likes and say what it wants. The press, the monarchs of the comm box, the social media hounds, even those enquiring chaps in outsized green caps stood behind him in Birmingham. Having weathered the first half-hour here, Burns was referred to by one of Australia’s close fieldsmen as a “sitting duck”. He was still sitting and ducking seven hours later. 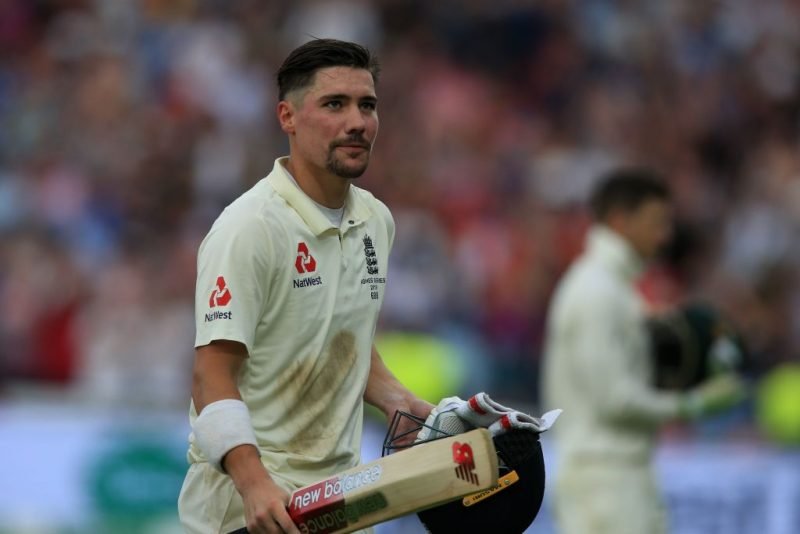 Burns has never been bothered by the qualified corollaries that invariably follow praise. He’s heard it all before. All that stuff about his tics and quirks, his idiosyncrasies, the famous head bob, the exaggerated backlift, all fluff he’s been dealing with ever since he was a kid on Surrey’s academy, pigeonholed as a “massive lbw candidate…”, according to his coach and mentor Neil Stewart, “except that he never missed it”.

His technique, refined over the years, is a precious thing, unique to him, and a rightful source of pride. I interviewed him about it once. “I think the way my technique is and the certain nuances with it – there may have been some scepticism about whether it could work,” he said. “The unorthodox nature of my game probably played a part in why it took so long for a call to happen.”

When you score your maiden Test century then hug it out with your best mate! @roryburns17 ➕ @JasonRoy20 = ❤️ pic.twitter.com/cljmNEqFDF

Then he launched into a detailed account of his pre-match routine that could have described the arc of his whole career. “You start off facing underarm throws, from five or six yards away. The sole purpose is to get out of the way. You’re not allowed to hit a shot. Fizzing at your head. Flat, directed at your chest and head, straight at you. You’ve got to bob and weave.

“Then, same drill, but this time with the dog stick, bombing you from 12 yards. When you’ve got used to it flying past your earholes, take it up a notch. The basics stay the same, but this time you’ve got to pull and hook everything. If the ball is outside my eyeline, I’ll be looking to pull straighter through midwicket. If it’s on my right shoulder, I’ll be looking to hit it round the corner behind square. Some lads use tennis balls but I prefer to guts it out with cricket balls.”

Burns has spent a lifetime pushing whatever talent he has as far as it can go, alighting and refining as he goes. All those years of analysis and reassessment. All that trial and error, burying his head in the books, constructing his theories, all leading to this week.

Panic over. Burns has called in Big Stewie. Little brother Alec serves them up, and the true guvnor does the rest

My bit on the biggest week of Burns' career, fools' errands, and how swiftly cricket can spit you out#ashes2019 https://t.co/GKGUySdni8 pic.twitter.com/PvZRlFD93d

A few days ago he was spied at The Oval, cramming before the biggest exam of his life. The hands had gotten too far away from his body, and the wrist-hinge had become a burden rather than a reliable source of leg-side runs. Stewart (and little brother Alec) worked with him to tighten up, and to drum into him, again, the value of abstinence. It worked: where at Lord’s he’d seemed skittish, at Edgbaston he was imperturbable.

To bat all day in Ashes cricket you need a little luck. On another day he would have edged one of those ‘play the line’ dead-bats and that would have been that. But no matter. The game is played ‘upstairs’, as they say; England’s top order has been crying out for an opening batsman who just plays the thing in front of him as responsibly as he can.

In the evening session, as he scrabbled up towards some version of a sporting reckoning, Burns went 37 minutes without scoring a run. He then played and missed four times in two overs as he staggered through the nineties, before, just like that, he got a fine glance away (he’s a world class leg glancer), and eyed a single to mid-on.

The shy from the fielder hit the one stump available, but by then Burns had made his ground. He’d crossed the line, and made it in one piece. An Ashes century. A lifetime’s work. He will go again tomorrow.