England tumbled to their sixth-lowest Test total on a disastrous first day against New Zealand in Auckland.

Trent Boult (6-32) and Tim Southee (4-25) displayed a mastery of swing bowling that had England reeling at 27-9. It was only a spirited late 33 not out from Craig Overton that prevented the tourists falling to their lowest ever total in Tests.

New Zealand captain Kane Williamson – who ended the day 91 not out – won the toss and, after some deliberation, put England in. The ball swung appreciably and Alastair Cook (5) was the first to go, caught at second slip off Boult, before the same bowler saw to the England captain. Joe Root, who moved himself to No.3 in place of James Vince (who was replaced by Ben Stokes in the line-up). He played loosely at his sixth ball, to be bowled for a duck by one swinging in. 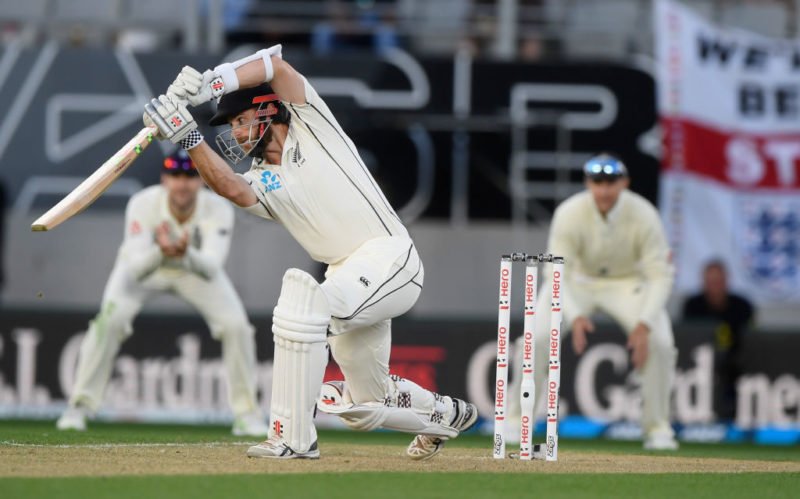 Kane Williamson was in masterful form

Dawid Malan edged Boult behind for 2, then Stoneman became Southee’s first victim, nicking to Watling the wicketkeeper for 11. Ben Stokes survived eight balls for his 0, bowled by a Boult inswinger after shaping to leave. Jonny Bairstow chipped a catch back to Tim Southee for 0, Chris Woakes survived for a nine-ball 5 before being bowled by Boult, and Moeen Ali fell for yet another duck, cleaned up by Southee. Then Stuart Broad, off Southee, was brilliantly caught by a diving Williamson at gully – for England’s fifth duck of the day.

James Anderson survived 11 balls while Overton struck five fours and a six for his 25-ball knock, before the No.11 hit Boult to point to round things off inside 21 overs.

In reply, though Anderson removed opener Jeet Raval (3) – caught behind – early on, England found nowhere near as much swing or seam as the hosts. They bowled well enough to put New Zealand under pressure and prevent them running away with the game but still find themselves staring down the barrel of a mammoth first-innings lead. Broad took his 400th Test wicket in sub-optimal circumstances as Tom Latham (26) clipped a leg-stump half-volley straight to mid-wicket and Ross Taylor was the last wicket of the day, hitting a short ball from Anderson to mid-wicket for 20.

But it was Williamson who, playing the ball late and driving fluently, set himself apart to guide New Zealand to a commanding position at the end of day one. Alongside No.5 Henry Nicholls (24 not out), he now has the opportunity to put the game beyond England’s reach by lunch time on day two.