Just a day after flying back from Brisbane after being named a late Ashes reserve, the 29-year-old stood 213 not out from 257 deliveries at stumps on day one, with his double-century coming off just 228 balls.

With Nathan Lyon extracting dangerous turn on a slow Gabba wicket, Australia captain Steve Smith would have been forgiven for wishing he also had the right-arm offies of Maxwell up his sleeve. But it was the batting prowess of Victoria’s No.3 that put the Blues’ attack to the sword in a remarkable innings at the North Sydney Oval, where Victoria finished the day on 365-3. Although New South Wales were without their Test bowlers, their attack of Doug Bollinger, Trent Copeland, Stephen O’Keefe, Sean Abbott and Moises Henriques have all represented Australia in some form of the game. 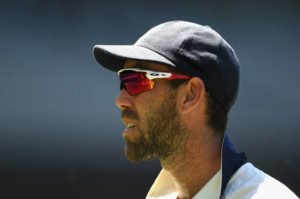 Glenn Maxwell has given the Australia selectors food for thought

Maxwell was adventurous from the outset, pulling Bollinger for four to get off the mark before reaching triple figures in the same fashion – his ton coming from just 113 balls. He drove Copeland back down the ground for four to bring up his double century, one of the more impressive strokes in an undefeated innings that included 29 boundaries. Maxwell shared a 148-run partnership with Aaron Finch, before the captain was caught behind for 76 off Henriques.

The Victorian all-rounder looked likely to bat at No.6 for Australia in the Ashes opener after featuring in recent tours of India and Bangladesh, and scores of 60 and 64 against South Australia earlier this month.

Ultimately, Shaun Marsh was favoured for the No.6 all-rounder berth in Brisbane. Despite Marsh remaining 44 not out after day 2 of the Test, Maxwell has given the Australia selectors a timely reminder of his credentials. He could still play a major role in this Ashes, but, for now, his exclusion is Victoria’s gain.