In the latest issue of Wisden Cricket Monthly, out January 19, John Stern examines how Ben Stokes’ bold and unconventional leadership sparked England’s outstanding Test series win in Pakistan and considers where it sits in their all-time list of overseas victories.

Elsewhere, we bid farewell to 2022 by selecting a men’s Test XI and women’s cross-format team of the last year, Ricky Ponting speaks to Mel Farrell about his concerns for the future of Test cricket and the fallout from Justin Langer’s ousting, Phil Walker explores the burgeoning business of women’s cricket, and Liam Brickhill reports on Zimbabwe’s heartening resurgence.

Mark Ramprakash, Anya Shrubsole and John Simpson share their expertise in our coaching section, Craig White reflects on his eventful career, Gary Pratt tells James Wallace he’d have swapped that run out in 2005 for a few more years on the county circuit, and in a candid interview John Hollioake, father of Adam and Ben, talks Jo Harman through a fairytale story with a tragic ending.

As for our columnists, Andrew Miller argues the global game is reaping the rewards of the much-maligned county system, Adam Collins tells us what Australians really think of Bazball, and Lawrence Booth, reflecting on Rehan Ahmed’s wonderful debut at Karachi, considers the benefits or otherwise of throwing teenagers into the heat of battle.

“There have been so many remarkable aspects to Stokes’ brief captaincy tenure. More to the point, there has been little that has been unremarkable. The combination of unstinting strategic bravery, tactical brilliance and emotional intelligence has been gloriously bewildering to witness.”
John Stern delves into England’s extraordinary Test series triumph in Pakistan 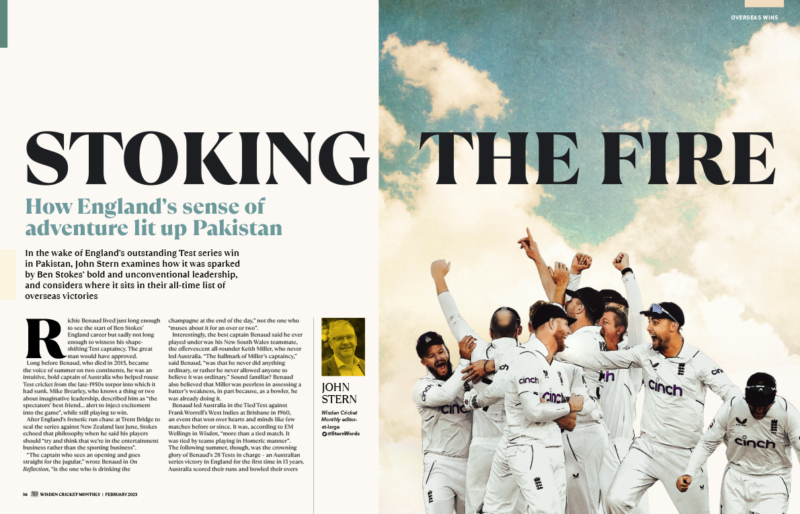 “The ECB’s attitude to the IPL has shifted in recent years, and can be split roughly 50-50 between the Age of Crazed Suspicion from 2008 to 2015, and the Age of Earnest Devotion from 2016 to the present day. This year, however, and for the first time in its history, the cream of the English game have been accepted on their own terms into the bosom of the world’s most lucrative franchise tournament.”
Andrew Miller says the recent IPL auction reflected the lofty standing of English talent on the world stage

“I’ve never been worried about Test cricket until I’ve seen this team here. Absolutely. The West Indies, you can trace that back 20 or 30 years ago, so you can understand their demise, but it’s harder for me to understand South Africa being this. If that is the best group of players that they’ve got then I think it’s an issue for the world game, for sure.”
Ricky Ponting tells Mel Farrell that the one-sided nature of Australia’s home series against South Africa left him fearing for the sustainability of Test cricket 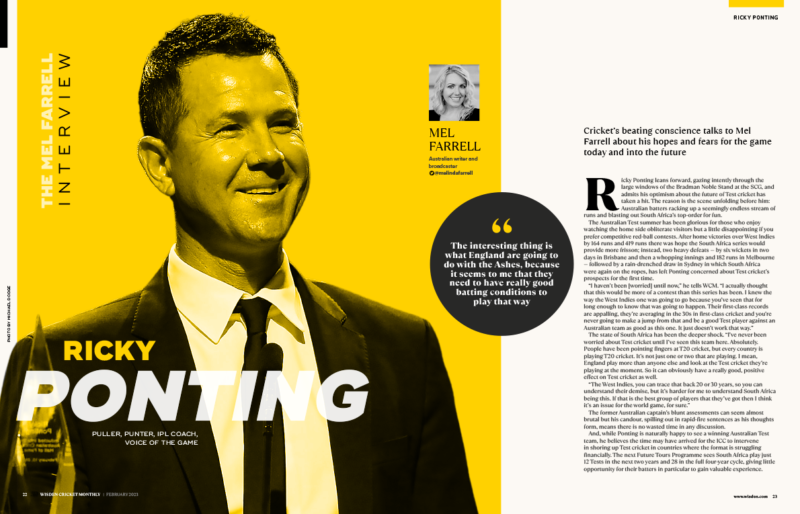 “It stands to reason the Aussies can’t quite come to terms with what they’re seeing given the rabble they demolished at their last meeting. But it makes their mission to win in England for the first time since 2001 all the more compelling.”
Adam Collins on what Australians are making of England’s transformation under Stokes and McCullum

“In a more equitable world, Jansen would be establishing himself as a generational Test star. A player that combines rare athletic gifts with the requisite mongrel. He rightly makes this composite team for 2022. One wonders if he’ll get the chance to be part of it again.”
Daniel Gallan on South Africa’s left-arm quick Marco Jansen, who was selected in WCM’s men’s Test XI of 2022 but will have precious few opportunities in the longer format over the next few years due to the Proteas’ limited schedule 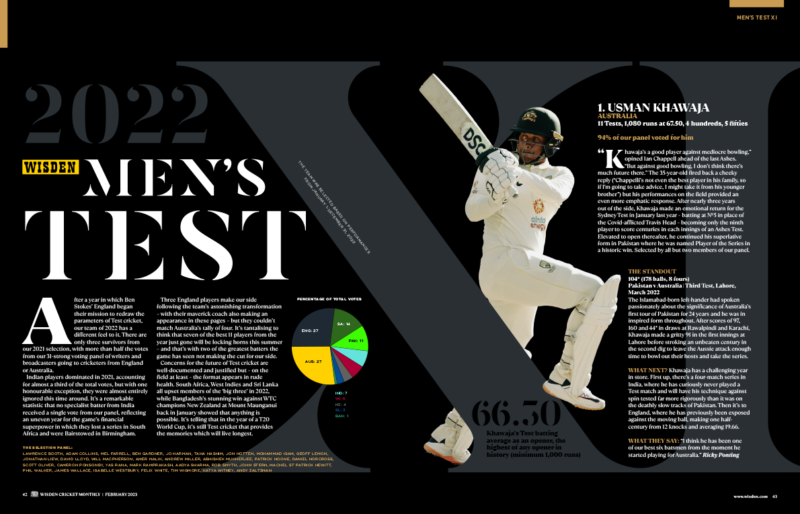 “It’s time to get real. You want cricket? You want cricket for the next 30 years? We’re all going to have to think really hard about how we’re going to make this possible.”
Dr David Goldblatt tells Katya Witney that cricket needs to do far more to combat the climate emergency

“This is public service. Most people think it’s a plush job. That it’s a reward for something but believe you-me, I’m working 18 hours a day. My position is that I created something that I see threatened now by ruination. It’s time I went back and put it back on its feet.”
Najam Sethi speaks to William Dobson about returning for a fourth stint as PCB chair

“I don’t think I should earn 125 grand playing in The Hundred. I don’t think women’s cricket is there yet. But give us the equal opportunity. That’s what has been lacking so much. A male cricketer coming up through the academies and age-group cricket has played 10 times as much cricket as I have. We’re not after equal pay, we’re after equal opportunities… As you’ve seen with the Lionesses, it does change very quickly, and that gratefulness of getting the opportunity and getting paid will turn into: ‘Well, hang on a minute, without women in The Hundred, have you got a product? Probably not.’ So it might be time to start paying everyone a little bit more fairly…”
England seamer Kate Cross speaks to Phil Walker about the burgeoning business of women’s cricket 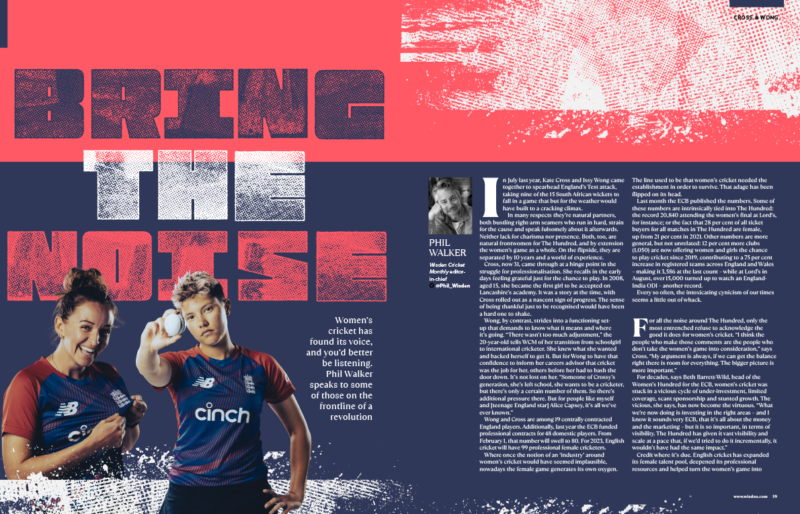 “Adam acts the tough nut, but inside there’s a gentle soul. I think that’s why he was a good captain – he takes pride in the way he treats people, and I’m proud of him for that. Ben was tough as nails, and you never knew it because he’d just give you a grin.”
John Hollioake, father of Adam and Ben, speaks to Jo Harman about being the parent of two international cricketers who made their Test debuts in the same match

“I would much rather have still been playing county cricket and that the run out didn’t happen at all, to be brutally honest.”
Gary Pratt speaks to James Wallace about his run out of Ponting in the 2005 Ashes and how it changed his life and career 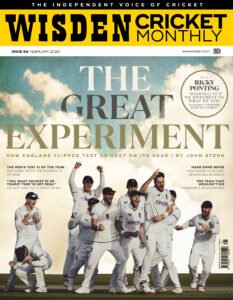