Joe Root is the cover star of the latest issue of Wisden Cricket Monthly, out on December 15. In an exclusive interview, the greatest English batter of the modern era – perhaps any era – talks Phil Walker through his first decade as a Test cricketer, from his debut in Nagpur to the extraordinary events of 2022. “It’s probably the most fun I’ve had on a cricket field,” says Root of the last six months.

We also celebrate England’s champion T20 side, analysing the 22 reasons behind their World Cup triumph in Australia under the stewardship of Jos Buttler, and speaking to their coach, Matthew Mott.

Elsewhere, Jo Harman speaks to Munir Ali, father of Moeen, about the origins of his son’s remarkable career, Liam Plunkett picks out the defining moments of his cricketing story, Taha Hashim considers what Rehan Ahmed’s call-up to the Test squad tells us about the state of English spin bowling, and we have a devilishly tricky quiz of the year with a host of great prizes up for grabs.

Matt Parkinson, Toby Radford and Paul Collingwood share their expertise in our coaching section, we select the best cricket gear of 2022, and Bruce Talbot investigates what has gone wrong at Sussex, a model county which has lost its way.

Returning columnist Adam Collins considers whether Australia has fallen out of love with its men’s national team, Andrew Miller says the Qatar World Cup has thrown up some awkward questions for our own game, Katya Witney reports on Jon Lewis’ appointment as England women’s head coach, and Lawrence Booth highlights the market forces impacting the world game.

And we ask: was Rawalpindi the greatest overseas win in England’s Test history?

“I got given the wrong suit. They actually gave me Chris Tremlett’s size, I’m not even joking. I was walking through the airport like Chandler Bing [from Friends] with my sleeves rolled up and my blazer… and I just looked like the team mascot, it was ridiculous.”
In an exclusive interview reflecting on his first 10 years as a Test cricketer, Joe Root recalls his first Ashes tour of 2013/14 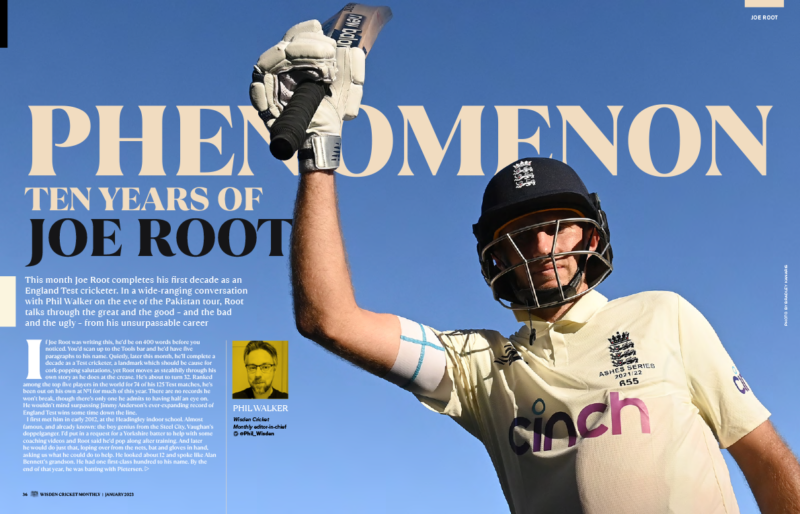 “When assuming the role last November in the wake of the Tim Paine scandal, Cummins was considered the perfect man for all seasons. Now, to this vocal segment of the public, he is a woke simp leading a team of pathetic and disloyal boys who could not handle a man’s man like Justin Langer.”
Adam Collins on the culture war at the heart of Australian cricket

“All the family were quite annoyed with me, they were saying you’ve just been in hospital for seven days with a heart problem. But my thinking was I can’t let this go now. I wasn’t worried about my health, about having a heart attack, all my thinking was when is the next session, when is the next match. I said to my brother, there’s no left turn and no right turn, it’s just one straight road. That’s what we had to focus on.”
Munir Ali tells Jo Harman how his son Moeen reached the pinnacle of the game 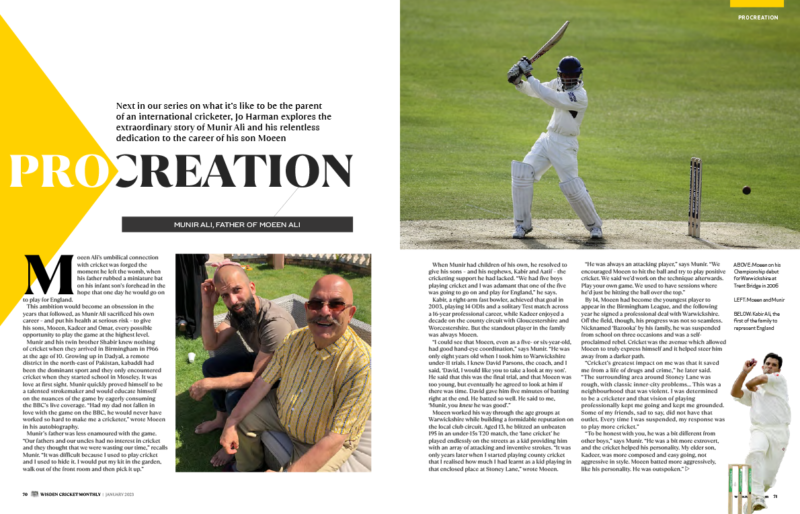 “Cricket’s politics are murky, and its history is so deeply entangled with colonial legacy that – when it comes to getting preachy about football’s current dilemmas – the sport should cast the first stone with caution.”
Andrew Miller says the football World Cup in Qatar has thrown up some awkward questions for our own game

“After this next World Cup, I think the 50-over game does need some really strong conversations around what it’s going to look like going forward. I was campaigning for it a lot in women’s cricket but I still think now, having been back in men’s as well, it’s trying to bring it down to 40 overs.”
In an exclusive interview with Mel Farrell, Matthew Mott, the England men’s white-ball coach, calls for a shortening of ODI cricket 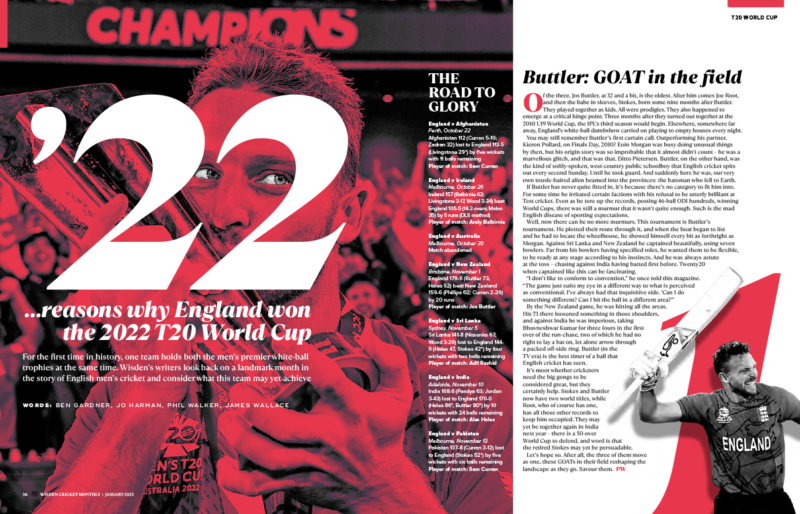 “When The Hundred first became a thing, one of the ECB’s selling points to cricket’s sceptical fanbase was that the money generated would stay in the game. Deep down, of course, this never rang true. The Hundred has always been a money-making scheme first, an act of philanthropy – with its talk of spreading the game and attracting a different demographic – second.”
Lawrence Booth on the market forces impacting the game at home and abroad

“I’ve seen him operate, I’ve seen him upskill players and get the best out of them – that’s what coaching is. In a different time and place, he’d have absolutely nailed the international stuff. He does it the best.”
In a feature on the evolving role of the coach, Gareth Batty tells John Stern that Peter Moores is the best in the business

“Ahmed, even with all that rawness and room for improvement, is better off on the fast-track. With England, if selected, he’ll be protected by a captain who sees the value of slow bowlers and who has the nous to end this country’s tortuous relationship with red-ball leg-spin.”
Taha Hashim on the rapidly moving career of Rehan Ahmed, the teenage leg-spinner 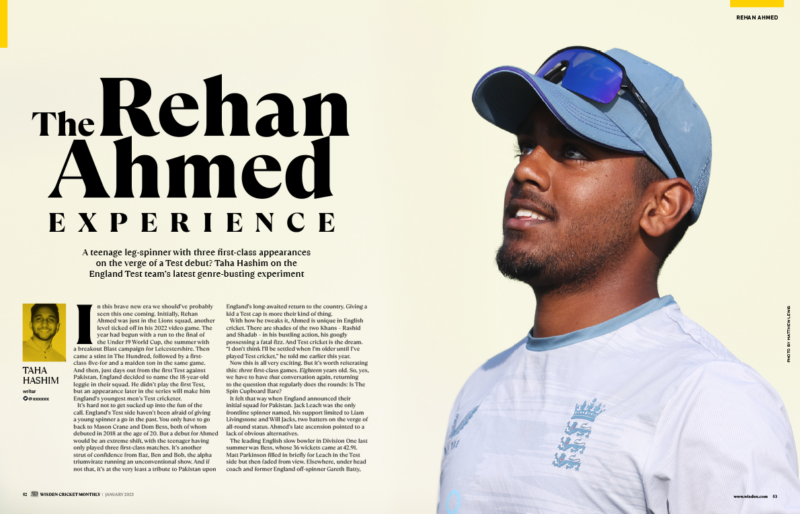 “The communication could have been better. It is a business at the end of the day, but there’s a right way of doing things. I don’t hold any grudges against anyone, though. I had a few injuries the year after the World Cup so who knows if I would have been able to play or not. Having been part of that team day in, day out, it would have felt different if I’d been a bits and pieces player, playing one in every six games. I’m glad I finished the way I did.”
Liam Plunkett reflects on the end of his England career

“We sat and chatted, he was into his cars and had just brought a new Porsche 911. He asked me what I was driving. ‘Err, I’ve got a lovely Ford Focus, Sachin’.”
Graham Napier on the hour that changed his life and his subsequent IPL stint with Mumbai Indians 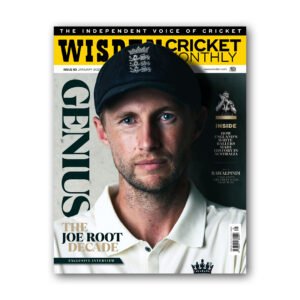