In the latest issue of Wisden Cricket Monthly, out February 24, we mark the long-awaited Women’s World Cup by profiling the 22 best female cricketers on the planet, including contributions from Lydia Greenway, Geoff Lemon and Sarah Waris.

We also preview the England men’s Test tour of the Caribbean, as John Stern examines one of the game’s great rivalries and Jo Harman analyses the 16-strong squad which has sparked such controversy.

There’s more on the decision to drop Anderson and Broad from columnist Lawrence Booth, who argues England are once again guilty of failing to focus on the challenge right in front of them, while Andrew Miller asks how Tom Harrison, the ECB’s CEO, still has his job following the recent wave of sackings. Further afield, Adam Collins writes that Australia were right to move on from Justin Langer, even if the circumstances around the coach’s exit were regrettable.

You’ll also find interviews with Ben Foakes, recalled by England and seemingly set for a proper stint with the gloves, Lancashire’s England hopeful Josh Bohannon, who speaks to his old boss Paul Allott, and the former England and Essex seamer John Lever on his wicket-laden career.

Elsewhere, Taha Hashim speaks to four players about what it’s like to score a first Test hundred, we pick out the emerging stars from England’s Under-19 World Cup campaign, and, after a bruising few months, we remind ourselves why we love the game, with 39 reasons why its brilliance is unparalleled.

“Heather’s got all the ingredients that a world-class Test batter needs. She’s got the temperament, she’s got the technique, she can go up and down the gears, and she can read match situations extremely well. If there was more women’s Test cricket, I think she would be held in even higher regard than she is now.”
Lydia Greenway, Heather Knight’s close friend and former teammate, on the England skipper’s brilliance in the longer format and her position in the game at large 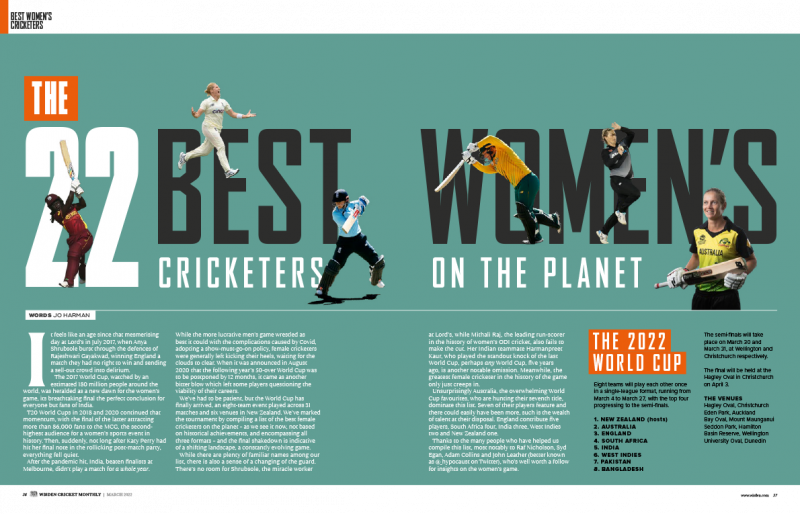 “It was clear then that Meg Lanning was in a different league. It was the crispness of her strokeplay, especially through the off-side, on the cut shot, the glide, the cover drive. Her signature shot is known simply as ‘the Meg’: standing tall with a perfectly straight bat, barely moving, yet diverting the ball through backward point with the speed of a full swing.”
As part of our feature on the best women’s cricketers in the world, Geoff Lemon examines what makes Australia’s captain so special

“When the game is failing by pretty much every set of criteria ever designed to agitate public opinion – be it matters of morals, money or pure sporting endeavour – it shouldn’t come as a surprise when Harrison’s broad-brush platitudes get given a resounding brush-off.”
Andrew Miller wonders how the ECB’s beleaguered CEO has held on to his role

“The Caribbean tour party confirms our game’s greatest curse: the tendency to over-think. It contributed to England’s hapless tour of Australia and it has happened again now.”
Columnist Lawrence Booth on the decision to axe James Anderson and Stuart Broad from England’s Test squad 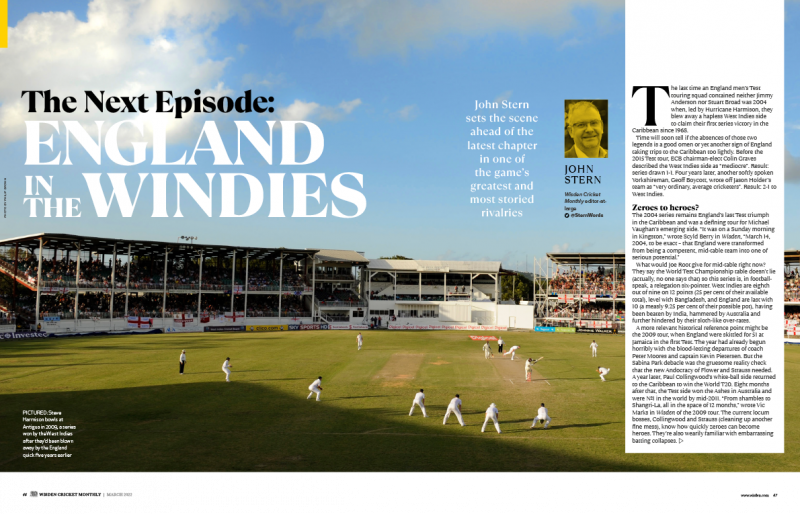 “The Ashes could have been a celebration of all that had been achieved under Langer, having made clear to him that this would be the end of the road, rather than the tacit understanding which seemed to exist between the senior players and administrators that his fate was already sealed.”
Adam Collins on the mismanagement of Justin Langer’s exit

“I mean, I cop a lot of stick, but I love Mamma Mia 2. The scene with Fernando on the balcony, I get shivers!”
Ben Foakes, in conversation with Phil Walker, talks about his latest opportunity with England, and his love of ABBA 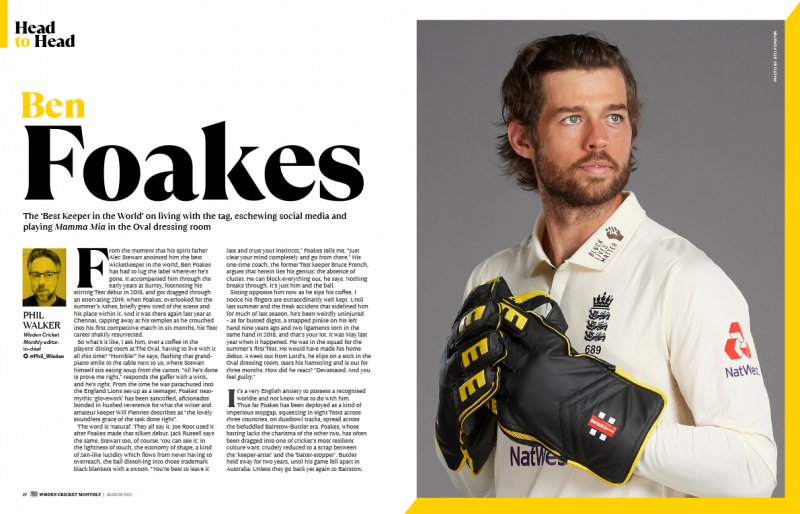 “My dream ticket would be Ricky Ponting for the Test gig, with Mahela Jayawardene, who scoops up trophies for fun on the T20 circuit, leading the white-ball sides. Ponting would bring an earthiness to the Test set-up that has been sorely lacking, while Mahela’s softer touch would sit well with Eoin Morgan’s white-ball squads, who don’t require the same strict guidance.”
Jo Harman picks out who he’d like to replace Chris Silverwood as the England men’s head coach

“Probably the worst and best thing that ever happened to me in my cricketing life so far was the time you banned me from all cricket for a week after I had a verbal altercation in a club match.”
England hopeful Josh Bohannon speaks to Paul Allott, his former director of cricket at Lancashire, about his journey so far and why he almost quit the game altogether 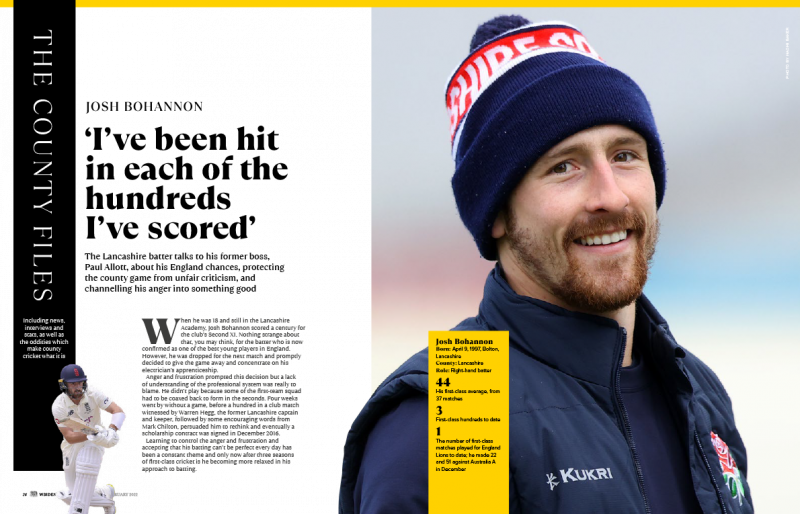 “I was in surgery from eight till 10 at night before I was due to bat the next day, so I had plenty of time to sit and ponder how I was going to go in potentially the last innings of my Test career.”
Former England opener Nick Compton is one of four players who talks Taha Hashim through their maiden Test hundred and the circumstances that led up to it

“The good part about county cricket, as far as I was concerned, came at the end of a day’s play, when you went into the county bar or the pub down the road and you had a few pints with the opposition, and you learned from talking to good players about the game. That was a golden age.”
John Lever, the former England and Essex swing bowler, reflects on his eventful career 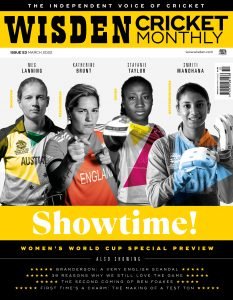