Canvassing opinion from figures across the game, we consider the futures of the England hierarchy, the technical failings of the batting unit, the state of county pitches, and ask whether the County Championship in its current structure is fit for purpose. We also debate who should make the plane for England’s next Test assignment in the Caribbean.

Elsewhere, a panel of 28 writers and pundits select WCM’s men’s Test team of 2021 – including an interview with one of the year’s breakout acts – and we pick out the best female cricketers of the last 12 months in a cross-format XI.

There are also exclusive interviews with Danni Wyatt, Alec Stewart, Steve Harmison and the Parkinson twins. Phil Walker compares and contrasts the careers of Heather Knight and Meg Lanning as the pair prepare to lock horns once again in Ashes battle, while our columnists Lawrence Booth, Andrew Miller and Adam Collins are in typically punchy form before the inimitable Andy Zaltzman wraps things up by beckoning us into his mind palace.

“Ultimately it’s no longer feasible or sensible or even vaguely humane to have one person overseeing all teams across all the formats, and this is before we get to the extra element foisted on Chris’ big plate, of being chief selector.”
Phil Walker says it’s time for England to split coaching responsibilities 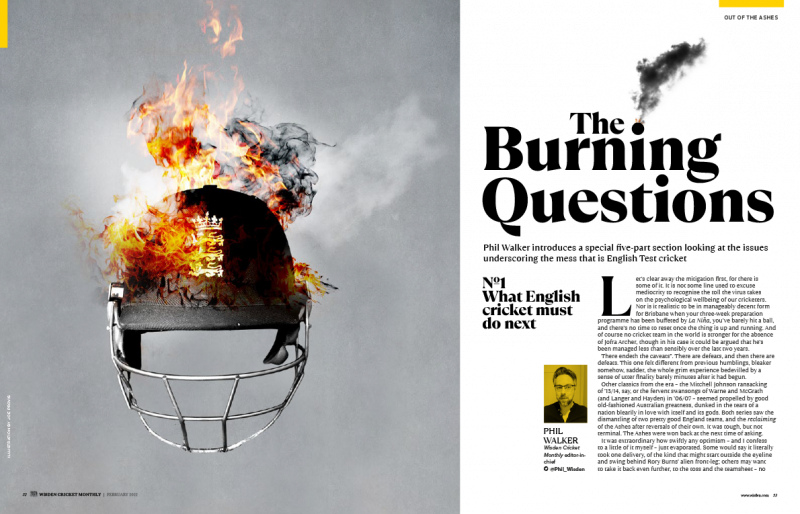 “You’ve got to try and understand what the purpose of county cricket is, and producing cricketers for England is certainly one of those purposes, but you’ve also got 18 individual businesses that are trying to win trophies. And you’ve got broadcasters which ultimately finance pretty much everything in the English game.”
Daryl Mitchell, the PCA’s director of cricket operations and former Worcestershire opener, considers whether the County Championship is doing its job

“It’s the ball coming back in – Sophie [Ecclestone] has got her a few times lbw, and Brunty [Katherine Brunt] got her with a back-of-a-hand slower ball that came out as a googly, when she celebrated and ripped half her shoulder ligaments off.”
Heather Knight on how England will look to get on top of opposing skipper Meg Lanning in the Women’s Ashes 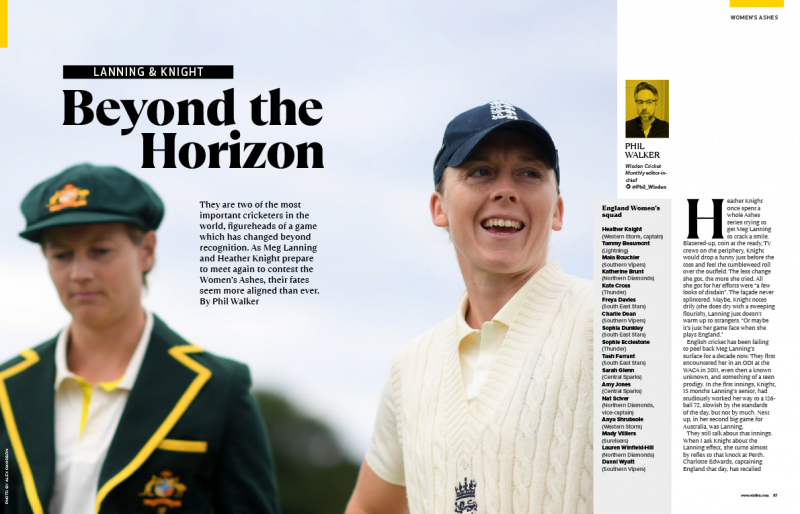 “Stuart Broad has the eloquence, the arseyness, and the unrelenting red-ball focus to demand better from a drifting squad, not to mention 152 Tests-worth of all-time-great service to the cause.”
Andrew Miller argues England’s veteran seamer should replace Joe Root as Test skipper

“If Matt gets hit for a six against Leicester, everyone’s clapping and I’m sat on the balcony and my heart’s in my bollocks. That feeling might go in three, four, five, six years’ time, but for the time being I still feel a bit nauseous when he’s running in.”
Callum Parkinson, in a joint interview with his twin Matt, on the joys and complexities of sharing their journey together 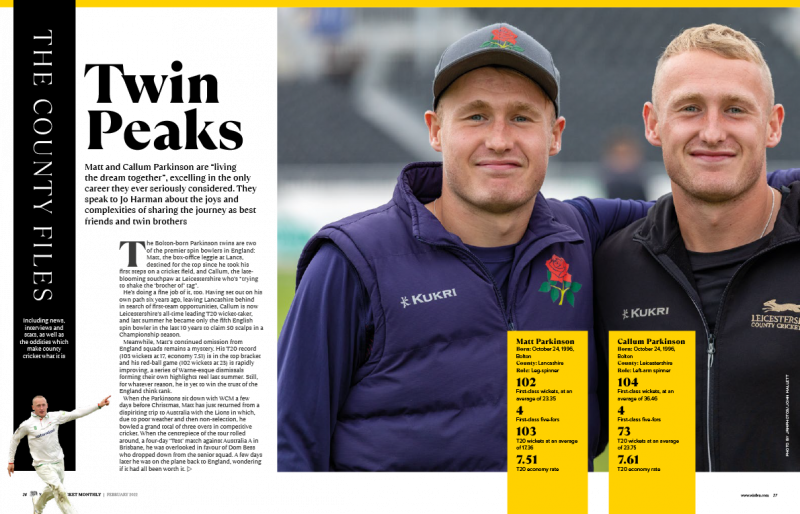 “Drift is what Leach was supposed to get through the air – not the basis of an entire sporting philosophy. Yet to hear managing director Ashley Giles speak ahead of the Sydney Test, it was as if meandering from one assignment to the next had become part of the ECB’s mission statement.”
England’s failure to focus on the challenges directly in front of them cost Joe Root’s side dearly in Australia, writes Lawrence Booth

“I had to put my football tracksuit on because I didn’t have another tracksuit. Then at dinner with Goughie [Darren Gough] I got cramp, and I haven’t had cramp in 10 years!”
Steve Harmison speaks to John Stern about joining the Yorkshire coaching staff 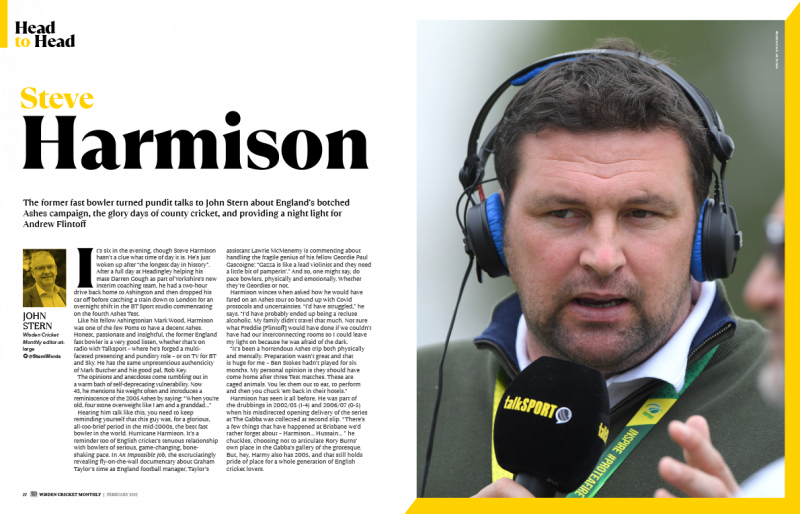 “As long as the desire to play for your country is there and that candle of hope still burns brightly, then nothing can stop you. It doesn’t matter whether it takes a year, three years, five years or 11 years to get another chance, just keep showing your class on and off the field.”
Fawad Alam, who makes the WCM Test XI of 2021, on his long wait for recognition 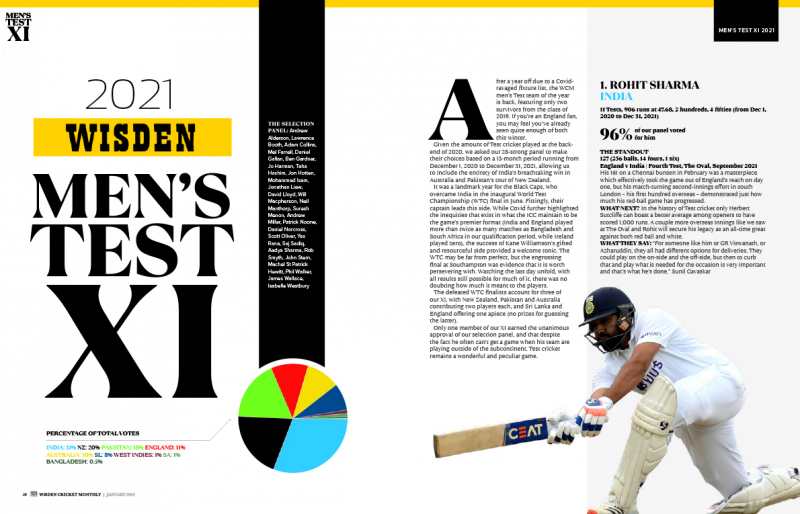 “The ‘Kohli Marry Me’ tweet was a shambles. It was obviously a joke but people don’t take a joke on Twitter. People say, ‘Why don’t you just delete it?’ And I say to them, ‘No chance, I’m famous because of that tweet!’”
Danni Wyatt on the price of fame

“I would have preferred to just open the batting. The Test team back then needed someone to fill the batter/keeper role. England weakened a strength, which was myself and Athers [Michael Atherton] opening together, in order for that to happen.”
Alec Stewart speaks to James Wallace about the defining moments of his career 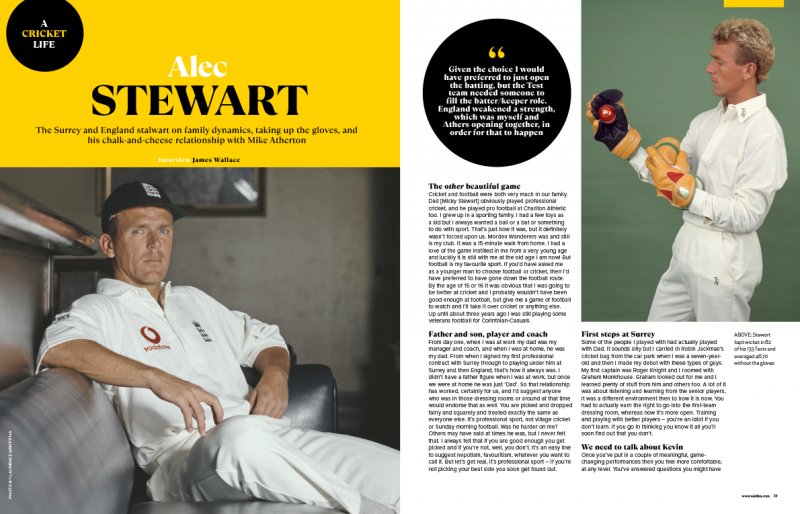 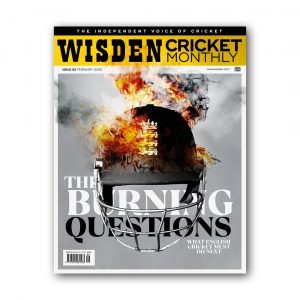