In the latest issue of Wisden Cricket Monthly, out on June 17, we consider how three of England’s emerging fast bowlers can force themselves into contention for a regular Test spot.

In a series of exclusive interviews, Warwickshire speedster Olly Stone tells Phil Walker he is ready to go full throttle after a stop-start career to this point, Ollie Robinson speaks to Jo Harman (two weeks before he became a front-page news story) about his evolution from county trundler to Test seamer and the “naivety” which led to his sacking by Yorkshire, and Craig Overton explains to Taha Hashim how he has returned to the England set-up a better, quicker bowler. We also examine the cases of four more seamers knocking on the door for Test recognition.

Elsewhere, we go back to the drawing board and remodel the much-maligned World Test Championship, Temba Bavuma speaks to Neil Manthorp about taking on South Africa’s white-ball captaincy, and Phil Walker analyses the fallout from a tumultuous Lord’s Test and what the Ollie Robinson revelations tells us about the state of English cricket. And, as ever, we have stacks of county cricket in ‘The County Files’, including interviews with Chris Dent, Billy Godleman, Kiran Carlson and Harry Gurney.

Former England and Middlesex fast bowler Norman Cowans winds back the clock and discusses the highs and lows of his career, Lawrence Booth reports on the game taking hold in Brazil, and England team analyst Nathan Leamon recalls his favourite summer of cricket which included the greatest knock in ODI history.

As for our crack team of columnists, Elizabeth Ammon hails the ripple effect of the county live streams, Andrew Miller despairs at England’s Ashes fixation, Isabelle Westbury argues that women’s Test cricket is a cause worth fighting for, and Andy Zaltzman delves deep into the significance of 200.

“There’s times when you go through the gears and it’s not about bowling as quickly as you can, but England are blessed with bowlers like that. I back my skills, but hopefully that won’t be required, and Woody, Jofra and me can do what we like to do: and that’s bowl fast.”
Olly Stone speaks to Phil Walker about prioritising pace 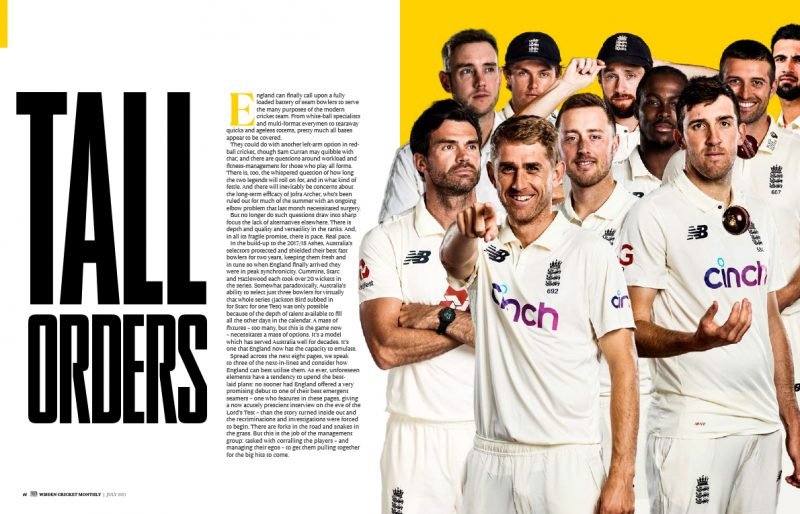 “Headline numbers reveal the popularity of the streams, emphasising what many of us already knew – that county cricket’s popularity cannot be measured by bums on seats at grounds.”
Elizabeth Ammon on county cricket embracing new technology

“We believe this is an improvement on the current structure, which has left most of the game’s stakeholders cold and done little to protect Test cricket’s future.”
As the first cycle of the World Test Championship reaches its conclusion, the WCM team set out their plans for a restructured competition featuring all Test-playing nations and a fairly balanced fixture schedule 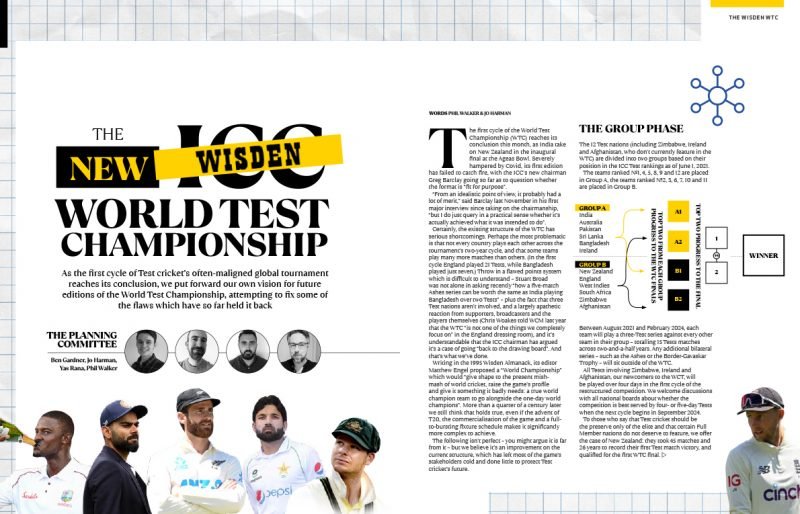 “Even if the whole world knows that the Ashes is the be-all and end-all for English cricket, it does a gross disservice to the sport’s two best teams for England’s head coach to make such a public pronouncement.”
Andrew Miller argues that by focusing on the forthcoming tour of Australia, Chris Silverwood and England have have undervalued this summer’s contests against New Zealand and India

“Captaincy gives you the opportunity to forget about yourself as a player, not get too wrapped up in it. For me captaincy does offer some freedom, but it’s not like that for everyone.”
Temba Bavuma speaks to Neil Manthorp about taking on the captaincy of South Africa’s white-ball sides 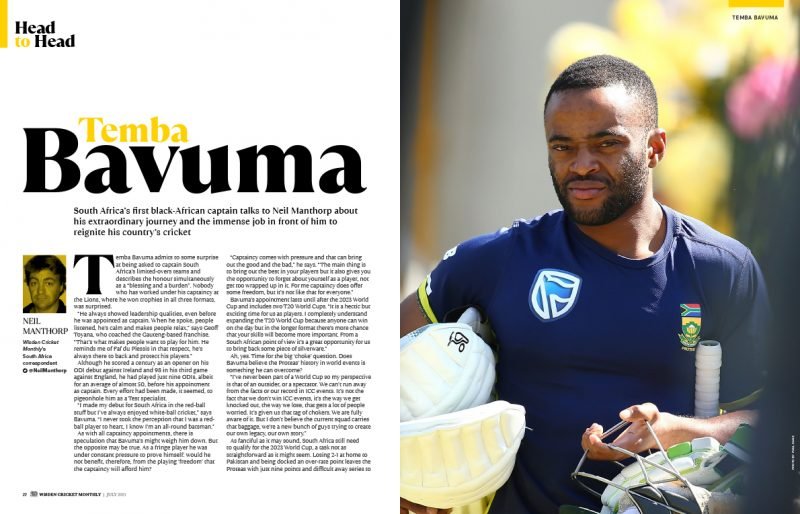 “My first name’s Luteru and my principal couldn’t pronounce my name. If I was a kid growing up now in New Zealand, I’d be Luteru Taylor instead of Ross Taylor. That in itself is probably a story.”
New Zealand’s Ross Taylor talks to Taha Hashim about his upbringing and run-filled career

“It was the highest individual total anyone had made in a day, eclipsing the 318 scored by Charles Gregory for New South Wales against Queensland at Brisbane in 1906. And the record stayed with Macartney for 73 years, until Brian Lara smashed 390 in the second instalment of his world-record 501* for Warwickshire v Durham.”
Richard Whitehead revisits a scarcely believable innings from Australia’s Charlie Macartney, 100 years since it was played 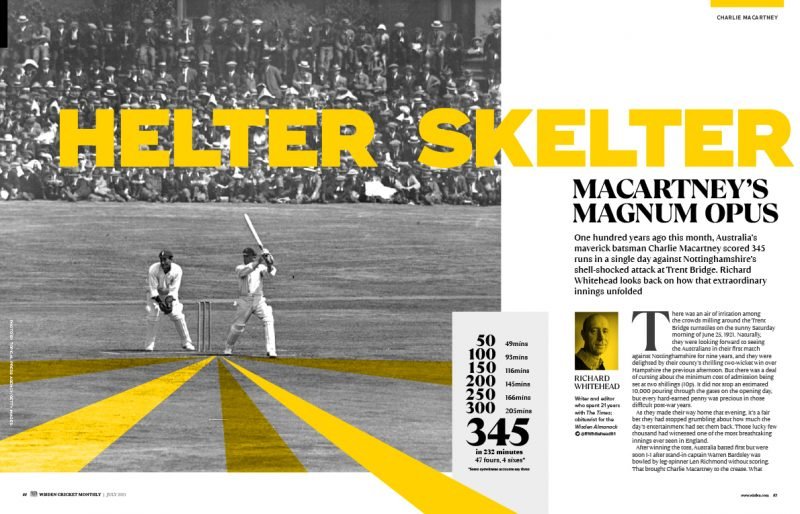 “I got dropped after that Test, even though we won it, and there was no more communication from that point. I was never seen again for England. It was painful. There were a lot of things I didn’t understand and a lot of politics at the time, from various people who didn’t understand me either.”
Norman Cowans reflects on the good times and bad from his career with Middlesex and England

“When I started travelling abroad, and saw others play, I was like, oh my god, that’s very quiet. Why are they sitting at the side with a teacup? We have this energy, this Brazilian flair that we put into what we’re doing. As captain, I don’t want us to be quieter. We are showing how happy we are
Roberta Moretti, captain of Brazil Women, explains the burgeoning passion for cricket in her country 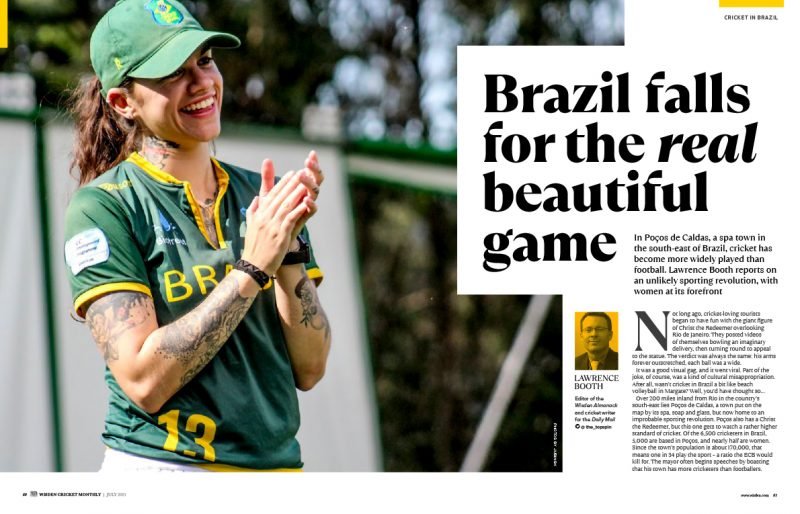 “As women’s cricket strives to demonstrate that it as an elite, compelling sport in its own right, not having the opportunity to play the game’s most revered format would send out a bad message.”
Isabelle Westbury says women’s Test cricket is a necessary luxury 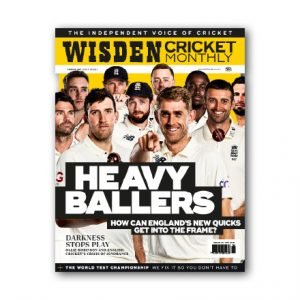