Dan Lawrence, England’s latest Test debutant, takes the cover of the latest issue of Wisden Cricket Monthly, out on April 22. Phil Walker meets the Essex strokemaker at his home ground of Chelmsford and asks if this singular talent from the backwoods of east London can sidestep the system to make it to the top.

In a wide-ranging interview, the 23-year-old talks about his “strange” strokeplay, England’s dressing-room dynamic and coming up against Virat Kohli, “the biggest alpha you’ve ever seen in your life”.

The May issue also sees the launch of a new section devoted entirely to county cricket. ‘The County Files’ will cover all 18 counties in every issue, and this month includes exclusive interviews with Durham’s new captain Scott Borthwick, Leicestershire opener Hassan Azad, Warwickshire coach Mark Robinson on his return to the domestic circuit, and much, much more.

Elsewhere, Suresh Menon interviews Anil Kumble, Chris Broad reflects on his colourful career in the game, Mohammad Amir tells Saj Sadiq his decision to retire from international cricket wasn’t selfish, Chris Adams selects Sussex’s Greatest XI, and Jo Harman tracks the history of the race to 1,000 runs before the end of May.

There’s the usual brilliance from our crack team of columnists – Elizabeth Ammon, Isabelle Westbury, Andrew Miller and Andy Zaltzman – Mark Wood recalls the summer that everything changed, and we have an extended club section to mark the return of recreational cricket, including a look at the best new gear on the market.

“I think it’s an Essex thing, the way we see things, you earn your money by what you do in red-ball cricket, and then you focus on white-ball when it comes around.”
Dan Lawrence tells Phil Walker that red-ball cricket comes first for him and his county. Succeed in that, he says, and the rest will fall into place 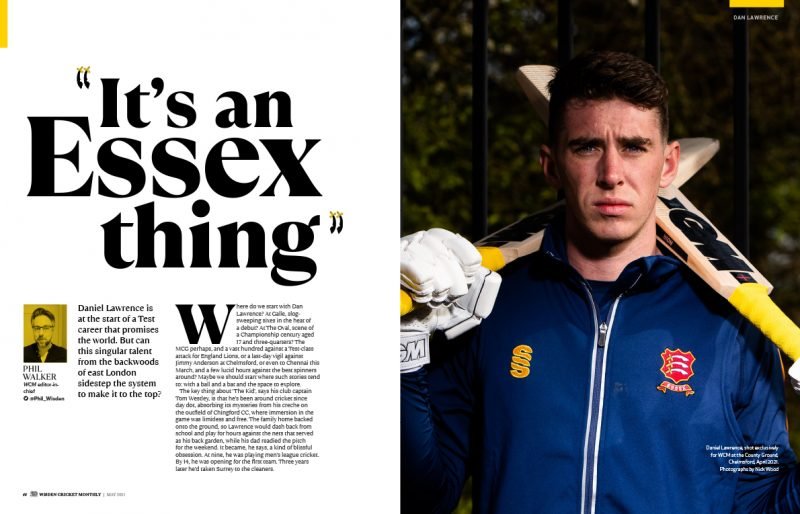 “There was nothing selfish about my decision to retire. I felt that I wasn’t getting the respect I deserved and that’s why I took the decision.”
Mohammad Amir opens up to Saj Sadiq about why he called time on his international career at the age of 28

“After batsmen worked out that he made a clicking sound with his fingers when he bowled his doosra, he started bowling these huge off-breaks at the same time as clicking the fingers on his left-hand!”
In ‘The County Files’, our new section dedicated to the English domestic game, Rikki Clarke picks the spin wizard Saqlain Mushtaq among his favourite Surrey teammates from his long career at The Oval 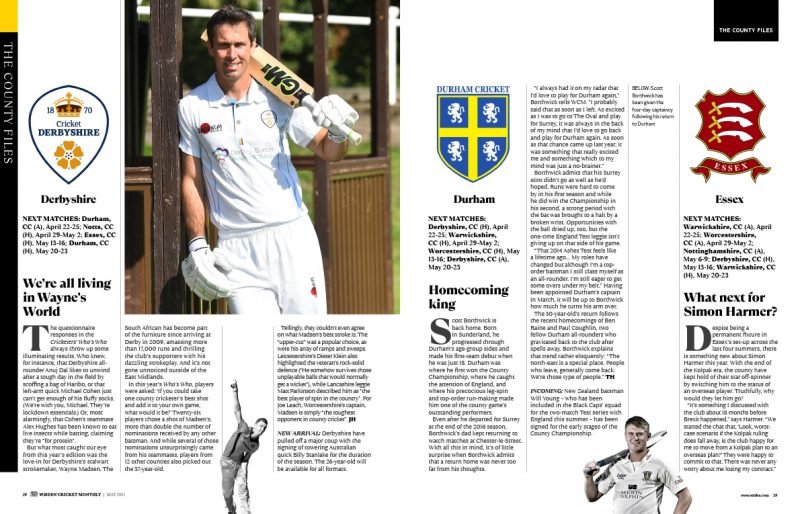 “I found it really difficult to get myself motivated to go about my day. It got to the point where I was struggling to eat and not sleeping. I went through periods where I just felt quite claustrophobic, it felt like the walls were closing in around me. There were times when I’d wake up in the morning and I’d be physically sick. I’d feel like I was seeing things which weren’t there.”
Elsewhere in our new county section covering all 18 clubs, Leicestershire opener Hassan Azad gives a candid interview about his battles with mental health

“Virat and I meet occasionally, especially at the IPL, but obviously we have both moved on.”
Anil Kumble, the legendary leg-spinner, talks to Suresh Menon about his playing career and his brief spell as India’s head coach 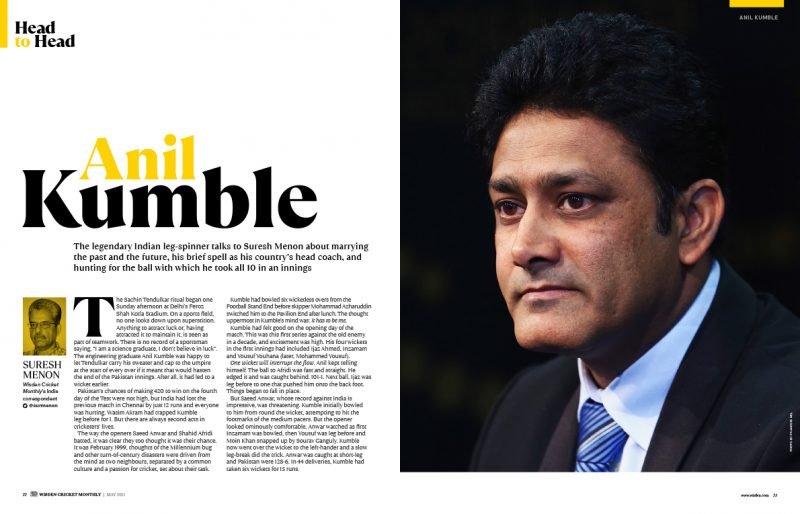 “Mushy was overweight and he didn’t take a wicket in the game but after facing him I came off the field and said to Peter, ‘We’ve got to sign Mushtaq next year, he’ll be a great bowler for us’.”
Chris Adams, Sussex’s three-time Championship-winning skipper, picks Mushtaq Ahmed in his county’s Greatest XI

“Bradman was prepared to provide Edrich with an opportunity, but there would be no free hits. ‘Good luck, Bill,’ he said as the batsman took guard. ‘We’re not going to give them to you.'”
Only eight batsmen have achieved the extraordinary milestone of 1,000 first-class runs in a season before the end of May. Jo Harman tracks the history of the famous race against the calendar 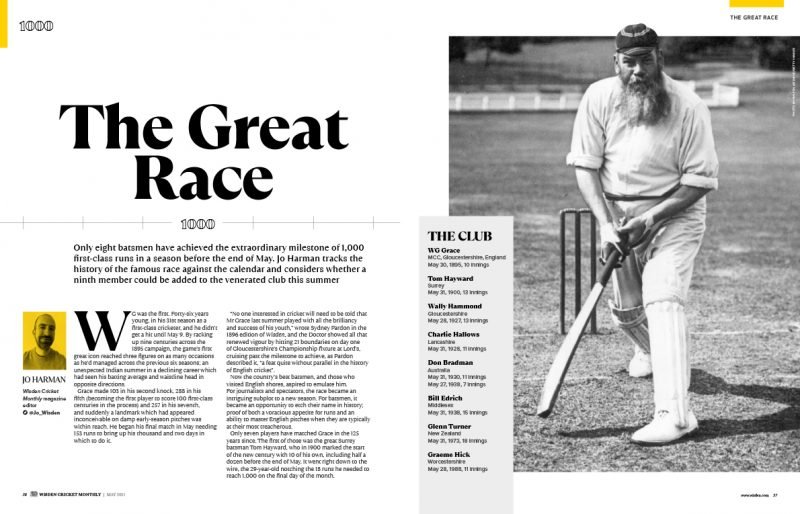 “Female coaches can provide a different perspective, different experiences and perhaps even a different skillset. We only need look at various leaders outside of sport to see why better representation of women in positions of power and responsibility is an effective step.”
Isabelle Westbury argues Sarah Taylor’s appointment to the Sussex men’s coaching staff is an example which should be followed elsewhere

“All of a sudden you weren’t a cricketer anymore, there were times when you felt more like a rock star.”
Dimitri Mascarenhas, the first England cricketer to play at the IPL, speaks to Richard Edwards about the early days of the game-changing tournament and the opposition he and others experienced from the English cricketing establishment 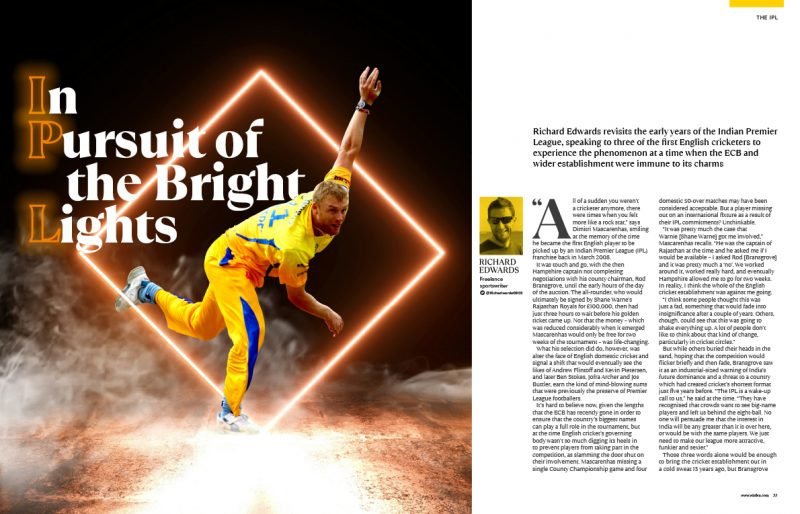 “Morgy came up to me and said, calm as you like, ‘All good, boss?’ ‘Yeah skipper, all good, no worries.’ Inside, I was screaming.”
Mark Wood recalls the extraordinary 2019 World Cup final and the events which led up to it in ‘My Golden Summer’ 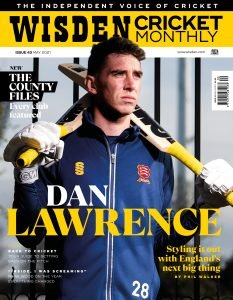