The latest issue of Wisden Cricket Monthly – out March 25 – is a county cricket special, marking the start of the new domestic season. “County cricket is precious, for all its flaws,” writes David Hopps in a brilliant essay to open our definitive preview to the 2021 campaign. “Discover it, nurture it, save it. It has never been more vital.”

Our 32-page bumper section includes team previews of all 18 counties, profiles of seven bright young talents to keep an eye on, and a selection of Wisden writers pick out what they’re most looking forward to seeing this summer after a Covid-blighted 2020. We also look ahead to a groundbreaking season for the women’s domestic game as Raf Nicholson speaks to a handful of the 41 new professionals, and Phil Walker talks to those on the frontline tasked with turning ‘Oval Invincibles’ from a marketing concept into something real.

Elsewhere in the magazine, Jo Harman meets Ian Watmore, the ECB’s new chairman, who says he’ll be taking a “collaborative” rather “dictatorial” approach to the role, Afghan spin sensation Rashid Khan discusses enhancing his country’s reputation on the world stage, and former New Zealand batsman John Wright reflects on his careers as player and coach.

We welcome back county aficionado Elizabeth Ammon for the new season, who joins a team of columnists which includes Andrew Miller, Isabelle Westbury and Andy Zaltzman, and we also have a guest column from Emma John on the internal politics at the world’s most famous cricket club.

“The county game has long been the Marks & Spencer of sport – except often without the saving grace of decent food. Its image is dowdy, in spite of endless relaunches. It was once impossible to imagine a High Street without M&S. Now it’s entirely possible to imagine the end of the High Street itself. Some put county cricket in the same bracket. The onrush of time has no loyalty. But that dowdy image, while unhelpful, should not in itself be cause for rejection.”
David Hopps on the unique charms of county cricket and the challenges it faces 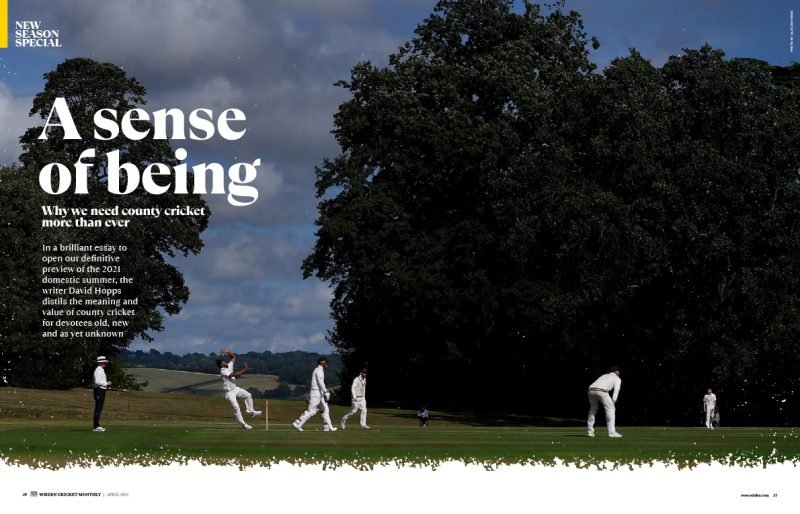 “Is it really treasonable to suggest, amid the uncertainty of a global pandemic, that England should double down on the format in which they are best placed for glory?”
Andrew Miller on England’s rest-and-rotation policy

“I tend to want to take the sort of Blairite approach, of picking two or three themes that are central to what I think the centre of the opinion of the game is, and then trying to stake those out and trying to take as many people with us as possible, so the whole game believes it’s moving in that direction.”
Ian Watmore, the ECB’s new chairman, outlines his style of leadership 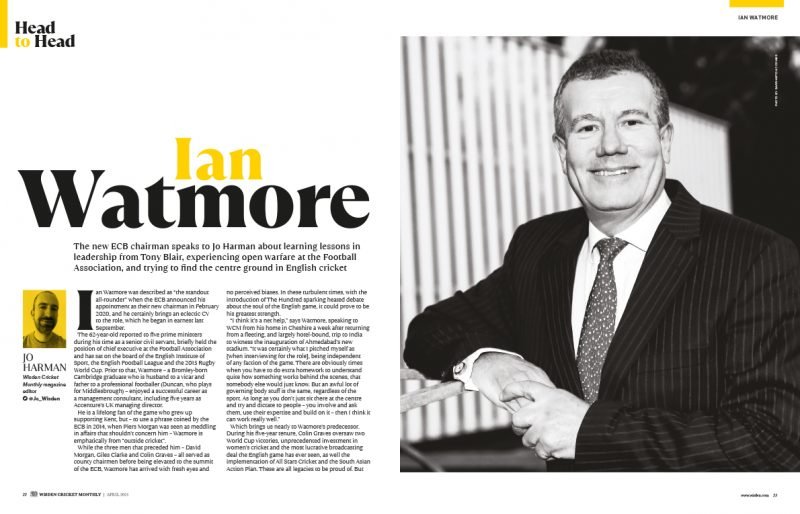 “The image of Afghanistan is definitely heading in the right direction and it’s great to think that I am making a small contribution to this change. It makes me feel lucky and honoured that I have become a role-model for youngsters.”
Afghan superstar Rashid Khan talks to Saj Sadiq

“England’s stars slowly made their names into the game’s wider consciousness, but the names hardly changed. Now, finally they are.”
Isabelle Westbury on the greater depth in English women’s cricket, as demonstrated on the successful recent tour of New Zealand 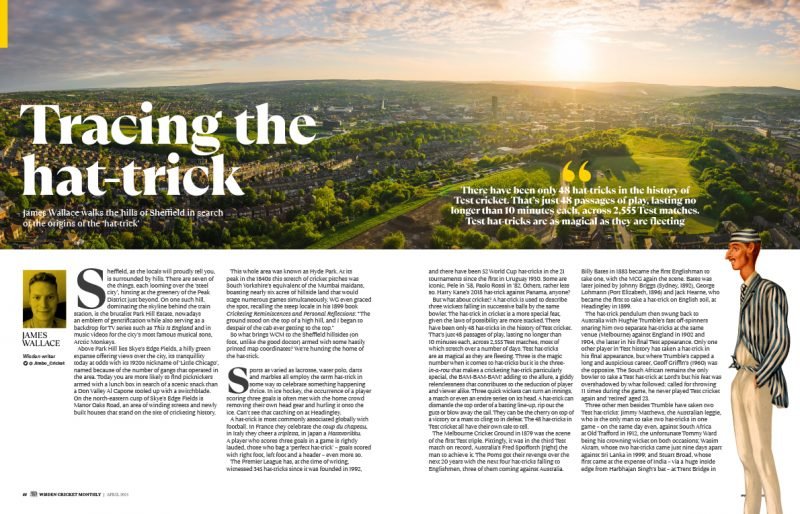 “The first two years with India were incredibly challenging because it wasn’t expected to work and some people were not keen that it worked. And that was understandable because I was a run-of-the-mill international cricketer from New Zealand coaching the Indian cricket team.”
Former Kiwi batsman John Wright reflects on his wide-ranging playing and coaching career 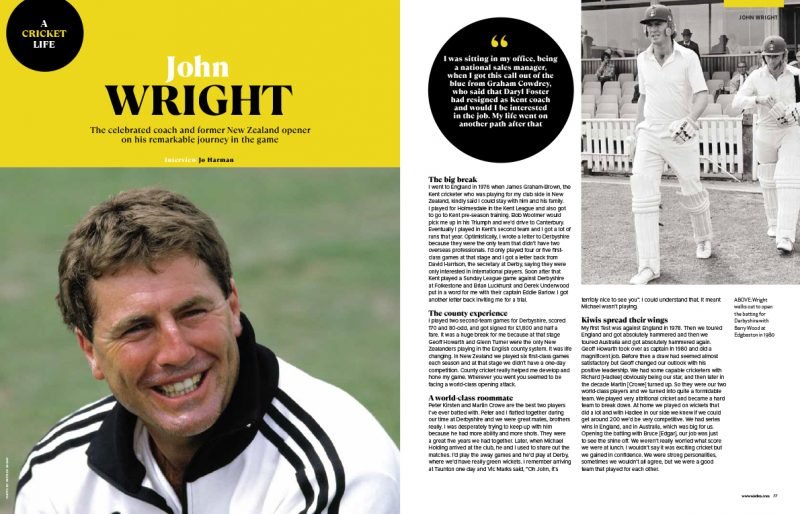 “Let’s put it this way, I don’t see what’s wrong with T20 cricket at the moment. Not that I disapprove of the changes that the hundred-ball brings, but I just don’t think we need to think this is going to take over the world”
Tom Moody, Oval Invincibles coach, speaks to Phil Walker about The Hundred

“Ostensibly, the new three-conference structure is a stopgap due to Covid, but even before the pandemic there was an increasing swell of opinion that two-division cricket had run its course.”
Returning county columnist Elizabeth Ammon says the County Championship’s new conference-based system could be here to stay 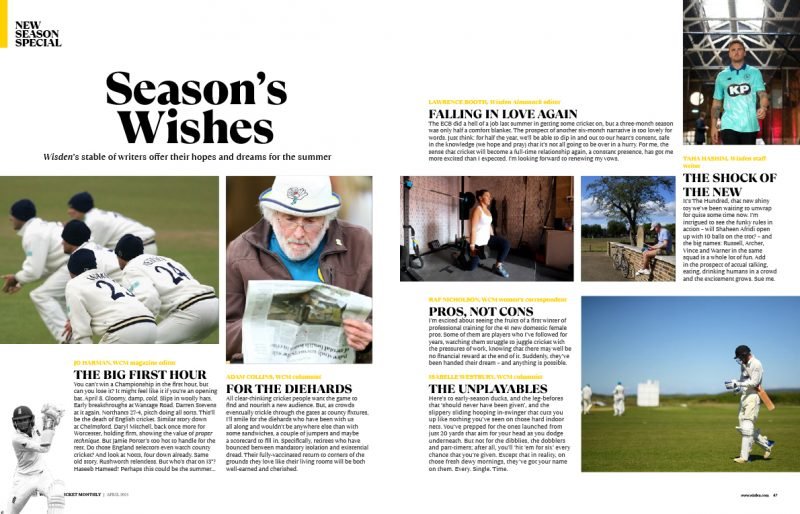 “I looked up to the big screen to see the face of Rachael Heyhoe Flint, who was no longer with us. I scanned the crowd to find Eileen Ash, 105 years young, who had earlier rung the Lord’s bell. In that moment I felt the true enormity of the day. What depths of gratitude we owed the women who had fought for us to be there.”
England’s World Cup-winning captain Heather Knight remembers the season when everything changed in ‘My Golden Summer’

“His apogee was scoring a hundred in each innings at Barbados in 1994 and if truth be told I’m sure he would prefer to open as he did in that match. However, I’m the gaffer in this enterprise and No.6 it is.”
Alan Butcher picks Alec Stewart in the middle-order of Surrey’s Greatest XI 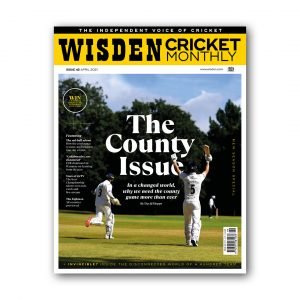