In the latest issue of Wisden Cricket Monthly – out October 22 – we profile the 12 best young batsmen in England, including an exclusive interview with Zak Crawley, the breakthrough star of the summer.

The 22-year-old Kent strokemaker talks to Jo Harman about his extraordinary 267 against Pakistan, his international white-ball ambitions and his aversion to social media, while his county coach Matt Walker draws comparisons between Crawley and Sir Alastair Cook. “Everything they do is designed so they can be successful in what they want to do,” says Walker, “which is to be one of the best for England.”

Elsewhere, Telegraph sage Scyld Berry introduces our review of the season, looking back on the strangest and most poignant cricketing summer of his life, before Phil Walker considers what the landscape could look like in 2021.

Michael Holding talks to John Stern about breaking out from the game’s usual confines, Jon Hotten marks Sir Geoffrey Boycott’s 80th birthday by examining the many sides of a complex and divisive character, Raf Nicholson reviews England Women’s clean sweep of the Windies, and comedian Josh Widdicombe imagines his perfect day at the cricket. We also welcome Isabelle Westbury to our stable of columnists, as she highlights the darker side of the IPL’s relocation to the UAE.

“I don’t particularly like social media, I don’t really like what it does to people, so I try and stay away from it. And I think that will be the case for a little while yet. At the moment I feel like it can only have negatives on my career.”
Zak Crawley says he won’t be capitalising on his newfound fame by opening social media accounts 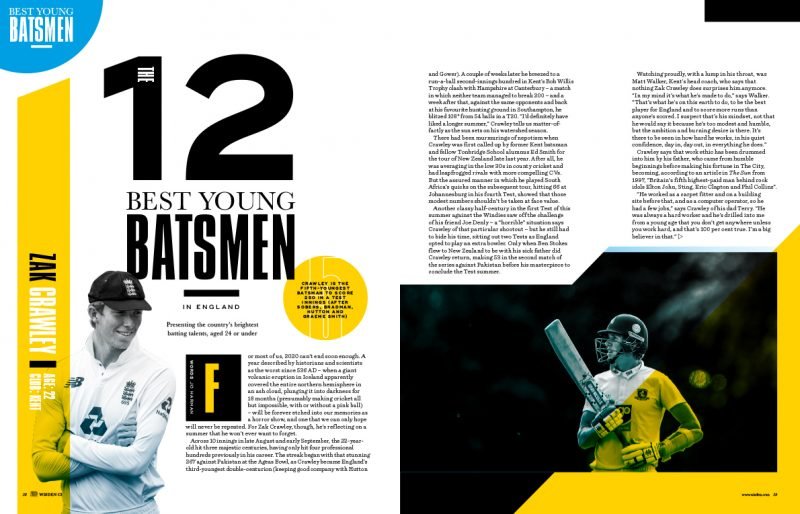 “When Has came to us, he was batting to survive and not get out a little too much, if I’m being honest. I think he’s turned that around and he now bats to score runs, which is a completely different mindset.”
Notts coach Peter Moores on Haseeb Hameed, who also features in our list of the 12 best young batsmen in the country

“I will treasure Cook’s 172 because he was more rounded – less angular, less tense with patriotism, I suppose – than in any Test innings, and he cover-drove with a flourish of his wrists to sign off the stroke. He ran – sprinted a couple of times – between wickets as if chasing his spring lambs. His low-burn intensity and stubbornness were something unchanging in a world that had completely changed.”
Scyld Berry introduces our review of a summer unlike any other 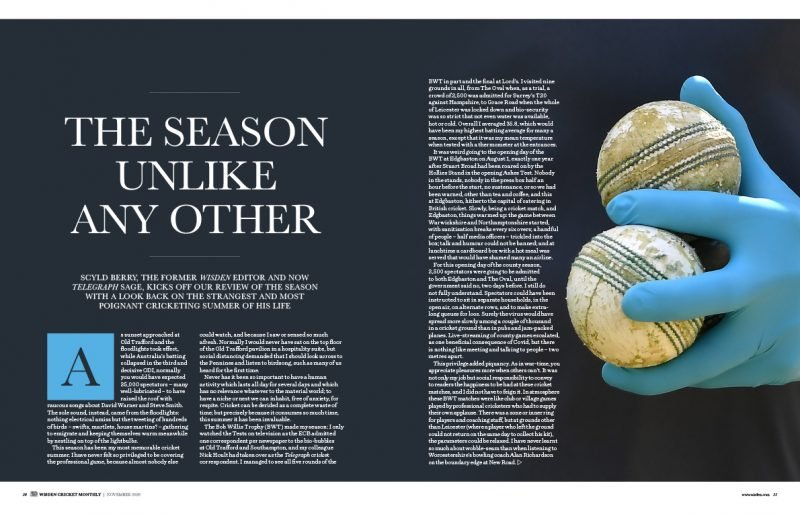 “The 2020 IPL will make a lot of people very happy and ensure that a few people remain very, very rich. But it only tells the story the BCCI and the UAE want us to see.”
Our new columnist Isabelle Westbury on the darker side of the IPL’s temporary relocation

“This was a good opportunity to express myself. I have had these feelings in me for years and I have just sat on them and wondered, ‘When is it going to change?’”
Michael Holding speaks to John Stern about his game-changing summer 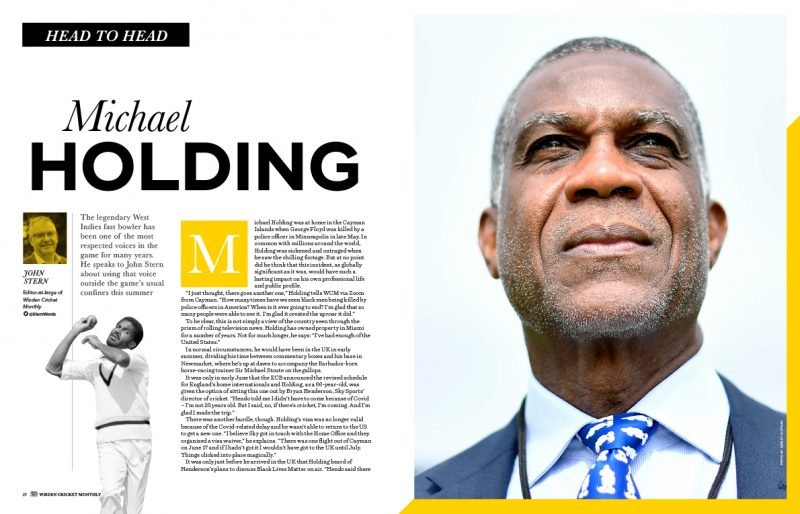 “Most people were quite standoffish but I was there rolling in the mud with them. I met a young rhino called ‘Magnum’, he was such an unbelievable little character.”
Former England quick Darren Gough speaks to James Wallace about his passion for conservation

“No one who knows anything about batting, who has tasted its sheer tenuousness and its constant closeness to the end, would want anyone to bat for their life, but you suspect Geoffrey Boycott might bat quite successfully for his own, not least because he often seemed to be doing so. He specialised in putting himself into deep holes from which he could dig himself out.”
Jon Hotten on the most divisive figure in English cricket 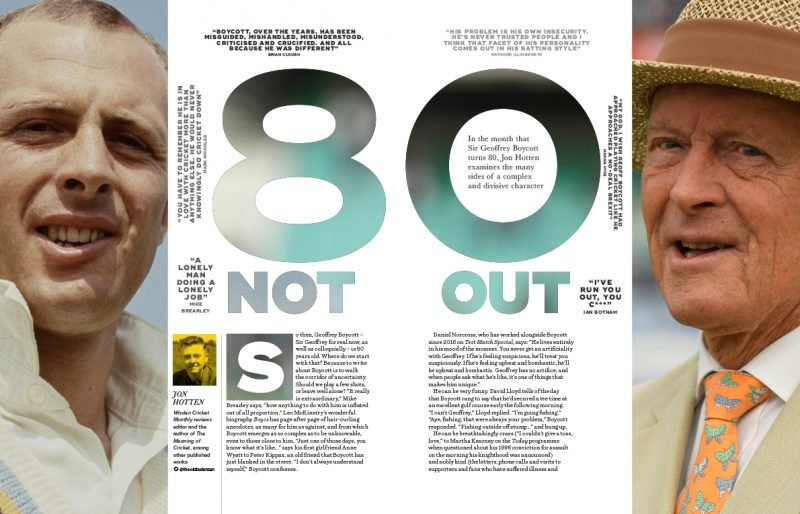 “Trevor Bayliss said to me he wanted to see a bit more ‘mongrel’ in me – that wasn’t an Ashington word but I knew what he meant.”
Mark Wood shares his tips on bowling rockets in our coaching series

“Cricket laid down a foundation for my life. Had it not been for cricket, we’d be dead now, or incarcerated for a very long time.”
Ricardo Salgado, formerly of Compton CC – a team founded in downtown Los Angeles to combat the effects of poverty and homelessness – speaks to Ben Falk about the lasting impact the team had on those who were part of it 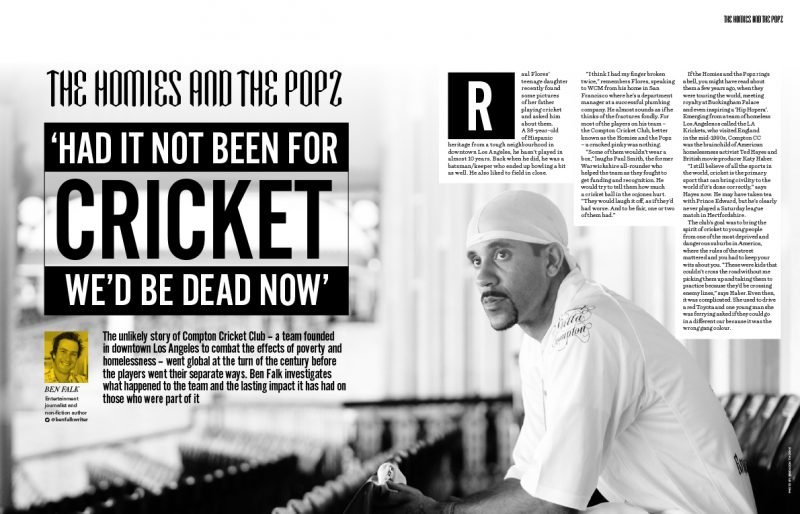 “I’ve got a three-year-old so this is a rare opportunity for a free eight hours where I can do what I want, eat what I want, drink what I want. I’d probably take the 27 people who came on my stag do.”
Comedian (and one-time Wisden apprentice) Josh Widdicombe imagines his perfect day at the cricket 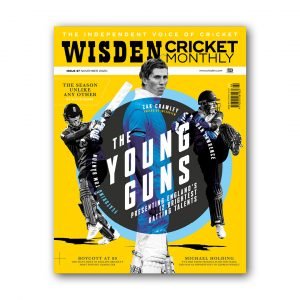