The cover story for the latest issue of Wisden Cricket Monthly – out April 30 – is a special feature on the battle for the future of Test cricket, as we consider the longer format’s place in the overall landscape of the game.

“I wouldn’t say Test cricket is on life support but it’s certainly in a bad way… the administrators are responsible for letting the game down,” Michael Holding tells us as part of a discussion – also featuring Harsha Bhogle, Mark Butcher, Chris Woakes, Wasim Khan and Mickey Arthur – on the burning issues affecting the format.

We also have mini essays from Jonathan Liew, Freddie Wilde and Dave Tickner on subjects including the World Test Championship, crowd numbers, four-day Test matches and the unstoppable rise of T20.

Elsewhere in the magazine, England’s gun all-rounder Nat Sciver talks to Phil Walker, Dawid Malan tells James Wallace he’s been painted as something he’s not, Aussie run-machine Dean Jones reflects on his life in cricket and Alison Mitchell takes us back to England’s 2008 tour of India and the chaos of the Mumbai terror attacks.

Elizabeth Ammon and Scott Oliver assess how the coronavirus crisis is impacting the county and recreational game respectively, Ryan ten Doeschate talks to John Stern about the importance of diversity, Derek Pringle picks his team of Essex all-timers and Kiwi left-armer Trent Boult shares his coaching tips on how to make the ball talk. Before comedian Miles Jupp rounds things off by reimagining the bad old days of English cricket with relish in ‘My Perfect Day’.

“If you look around the world at the support for Test cricket – not just by the number of people in the stands but even from the various cricket boards around the world – they are not really shouting from the top of the hills: ‘Come and watch Test cricket’. They are shouting about their shorter formats. That is what they are promoting.”
Michael Holding tells us he fears for the future of the longer format 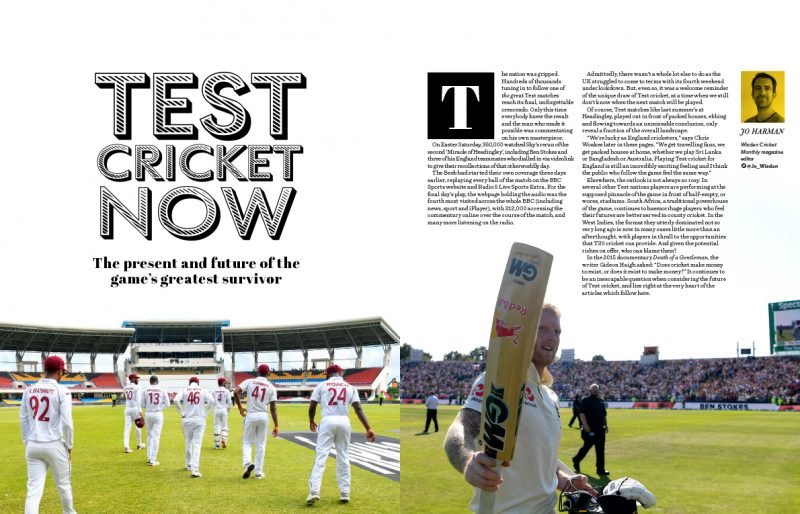 “I think Test cricket is as exciting now as it’s ever been. The games tend to move forward a lot quicker now and you get a lot more results. People say Test cricket is dying, and in a way you can understand why, but having been a part of Test series recently, you don’t feel that’s the case when you’re playing them.”
Giving the players’ perspective, England’s Chris Woakes feels the game itself is thriving

“I’m closer. I’m on the path that I want to be on. With Lisa [Keightley] coming in [as head coach], she’s keen to utilise me as a bowler as well as a batter. I’ve had a slight change of mindset with the ball. It’s less about me just filling in overs and being happy to be getting a spell, I want to be handed the ball because it will change the game.”
England’s Nat Sciver talks to Phil Walker about her bid to become the game’s best all-rounder 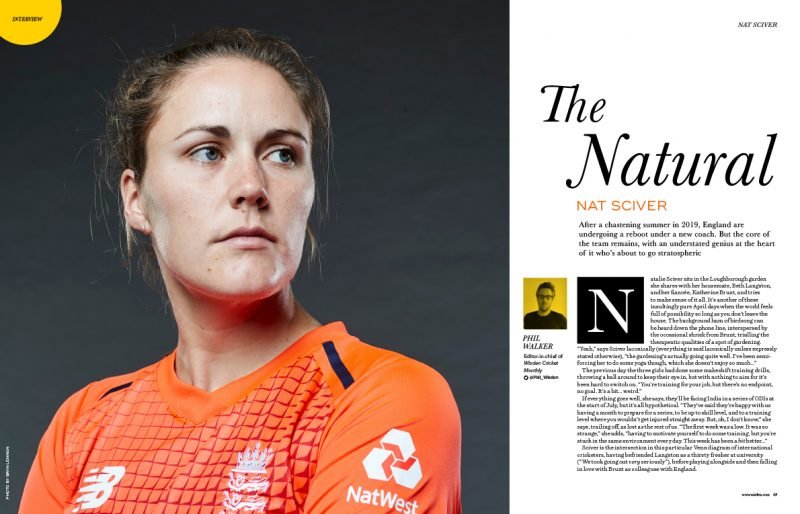 “Botham’s performance against Australia [in the 1992 World Cup] is the match that everyone remembers, as he poddled in off his post-back-surgery seven-pace run-up, serving up a diet of hit-me-if-you-dare outswingers, served with a bisque of don’t-you-know-who-I-am attitude.”
Columnist Andrew Miller on the greatest trick that Ian Botham ever pulled

“My dad drops me a message every now and again telling me to move my feet or something, which frustrates the hell out of me! I look at his stats and he averages 2 or something.”
In a candid interview, Dawid Malan tells James Wallace he’s determined to nail down a spot with England following his move to Yorkshire 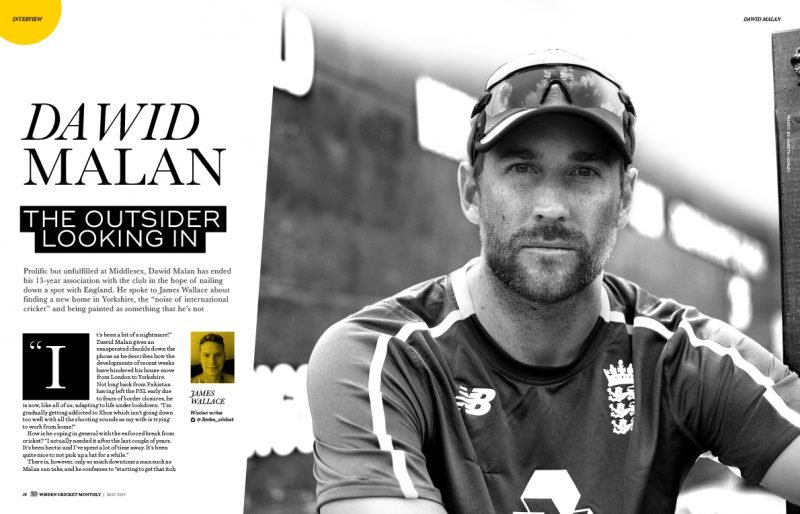 “A lot of people thought Nasser was a selfish player but it was more his competitiveness, and the expectations that were heaped upon him as a young player, that meant he didn’t always channel that passion in the right direction. But what I saw was a passionate cricketer who, as he got older, learnt to channel it better, less at his own teammates!”
‘The Greatest XI’ series continues, with Derek Pringle picking Nasser Hussain at No.4 in his team of Essex all-timers

“In hindsight, I probably shouldn’t have told Curtly Ambrose to remove his white wristband. It was done through sheer desperation.”
Ex-Australia batsman Dean Jones opens up on his life in the game 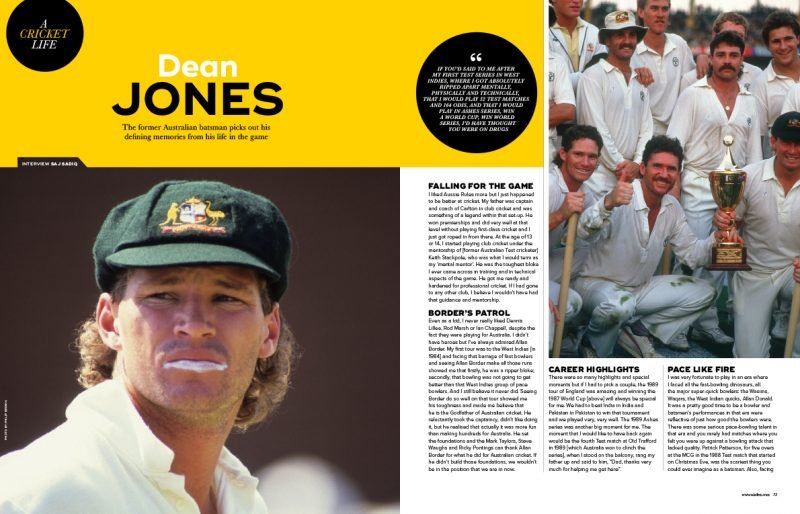 “The players got back to their hotel  and switched on their televisions before we arrived at ours. In my own bedroom I turned on my TV to see what they were seeing: live, rolling footage of fire, gun shots, blood and dead bodies. Mumbai’s most famous hotel, the majestic Taj Mahal Palace and Tower, was on fire. Terror was raining down on Mumbai.”
Alison Mitchell recalls England’s tour of India in 2008 which was put on hold after the chilling Mumbai terror attacks, only to emerge from the wreckage with a Test match for the ages 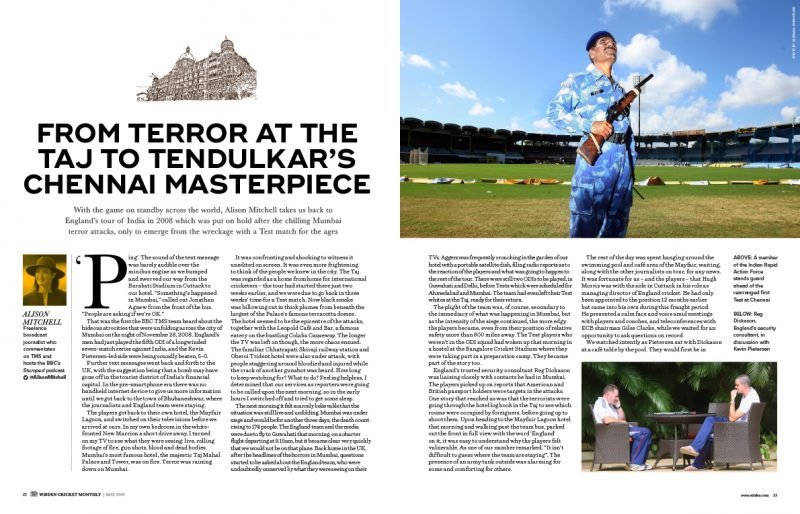 “One of the great things about live sport is buying food from a van and taking that first sip of a beer from a plastic glass that you’ve had to queue for, then carry in one of those holders, you’ve gone up 20 steps and had to wait till the end of an over, walk down some more steps, say excuse me to about 16 people, then sit down. You’ve probably missed a wicket, made enormous sacrifices, and it’ll be some awful piss. But something about it is glorious.”
Comedian Miles Jupp imagines his perfect day at the cricket 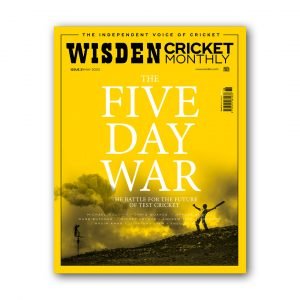