England have embraced the future by picking a Test squad to tour New Zealand featuring seven players aged 24 or under. Two of those, the uncapped Lancashire duo of Saqib Mahmood and Matt Parkinson, take the cover of the latest issue of Wisden Cricket Monthly, out October 31.

In a joint interview on their home patch, Mahmood and Parkinson talk to Phil Walker about their rise through the ranks at Old Trafford, reveal each other’s strengths (and weaknesses) and look forward to their first steps as international cricketers.

We also have an interview with Warwickshire’s Dom Sibley – the standout batsman from the 2019 Championship campaign, who is set to open with Rory Burns in New Zealand – and profiles of Surrey run-machine Ollie Pope and Kent tyro Zak Crawley.

Elsewhere, Daniel Norcross of Test Match Special introduces our review of an unforgettable season, which also features the story of Essex’s second Championship win in three seasons, CricViz’s Championship XI, and revealing insight into the life of a women’s county cricketer.

There are also exclusive interviews with Ashley Giles, Morné Morkel and Charlotte Edwards, while columnist Jonathan Liew throws us forward to 2029 and gives a glimpse of English cricket’s dystopian future.

“He was always that guy who was getting told off. But I think it just showed his competitive nature. And even now you see when he gets a pole he’s pumped. He’s always had that to him. It’s the fact that he’s a leg-spinner doing what he’s doing at this age, and he’s been doing it since he was 18. Now he’s the best white-ball bowler in the country.”
Saqib Mahmood on his Lancashire, and now England, teammate Matt Parkinson

“He bowled these big, slingy away-swingers, and we knew he was rapid, but after that game you could tell he had something special. At the time he was quite… dumb. You know, cricket-dumb… [Mahmood: “I think the word is naive…”] OK, let’s go with raw! But as he got older, the cricket savviness came in, to go with the raw talent that we all knew was there.”
Parkinson on watching Mahmood develop into one of the most exciting quicks in the country 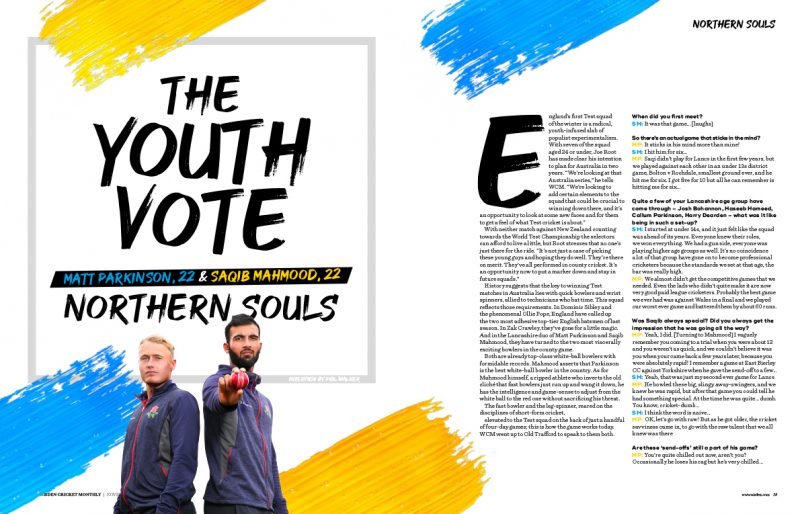 “As a young lad sometimes when you have that big success you can go one of two ways and I think I didn’t work as hard technically as I should have. I thought maybe I’d cracked it.”
Dom Sibley on his journey from teenage prodigy to soon-to-be Test opener

“Having held a British passport as a child, Wes couldn’t understand why he should now have to pay for an application, the result of which was uncertain. He had lived in this country for almost 60 years assuming he was a British citizen.”
Rod Edmond on the life and times of Wes Stewart, a former Middlesex seamer caught up in the Windrush scandal 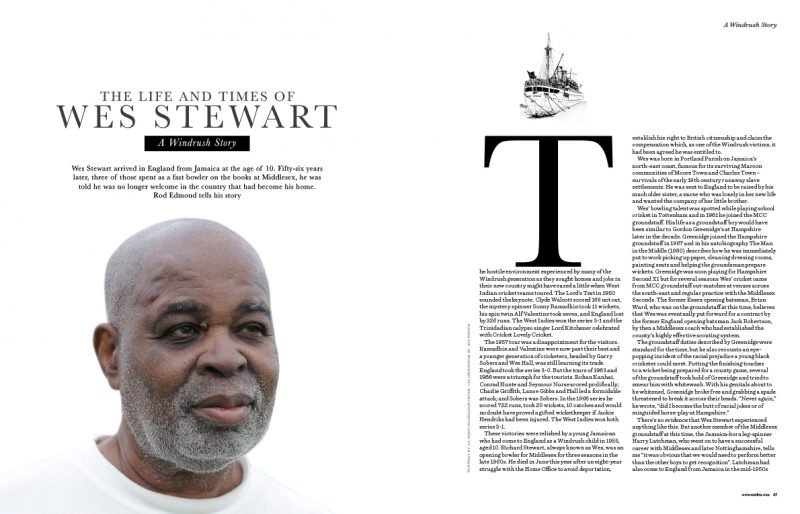 “Winning is a really important part of what we do but it shouldn’t be at the cost of your values – how you do it is important as well. I’d rather be less successful but have gone about everything the right way, rather than have a Cape Town [Australia’s ball tampering in 2018] type of incident.”
Ashley Giles tells John Stern his England teams won’t sacrifice their values for victories

“After I bowled to Kallis he walked out of the net and said, ‘Who is this guy?’ Ray Jennings replied that I was Albie’s brother and played a bit of first-class cricket. Kallis said, ‘He needs to play tomorrow in the Test match’.”
South African paceman Morné Morkel talks Jo Harman through the defining moments of his career 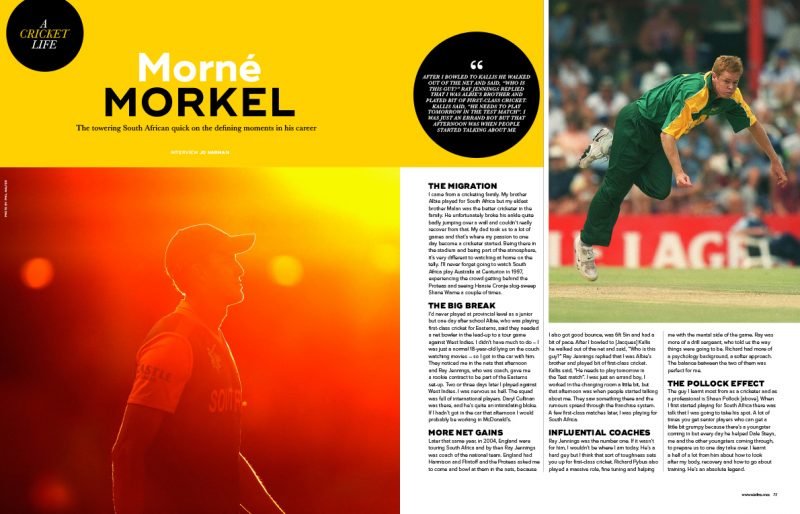 “Whereas The Hundred was initially contested by eight franchises (later seven, after Wales voted for independence in 2025), The One will feature the same two teams playing each other for eternity, a format that chief executive Andrew Strauss said would generate ‘a natural rivalry’ and ‘perpetual war’.”
It’s 2029 and Jonathan Liew reports on a new venture to revive the flailing domestic scene

“There are a few cricketers who just make you feel inadequate. James Anderson immediately springs to mind. Darren Stevens sometimes did it with both bat and ball in the same game. Right at the top of the list for me was Ravi Bopara.”
Zafar Ansari doffs his cap to one of the great “overachievers” of his era, a cricketer whom it’s lazily said that he didn’t make the most of his talent 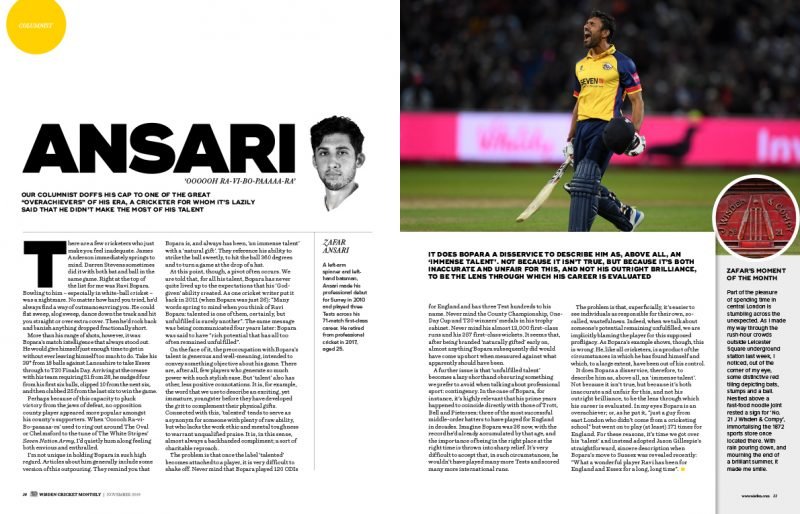 “I spoke to a county player who’d got snapped up for a big fee in The Hundred. He didn’t know how to react. He’s so dedicated to his county that he’s going to be genuinely gutted to leave the set-up halfway through the season, and he spoke about how he fears the culture around his club will be affected negatively. But then again, the money he’s gone for is a life-changing amount.”
Our secret county cricketer outlines his fears for a fractured future

“There’s a renewed sense of permanence around the club; a feeling of eras blending into one another. Carry a line through four former England captains, starting with Keith Fletcher, who joined the staff in 1962, on through Graham Gooch, Nasser Hussain and a certain knight of the realm, and you get a fairly convincing account of the story of post-war English cricket.”
Following Essex’s unique ‘modern double’, Phil Walker considers the background to one of the game’s most extraordinary stories 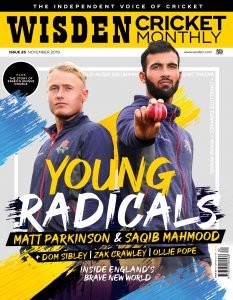