In the latest issue of Wisden Cricket Monthly, out July 25, Chris Woakes gives the inside story of England’s World Cup campaign, detailing the highs and lows from inside the changing room, culminating in that extraordinary final at Lord’s. “We were almost dead and buried,” says the England all-rounder. “And then that happened.”

Elsewhere, columnist Jonathan Liew sounds a note of caution on the precarious legacy of England’s World Cup win, CricViz analyse how the tournament was won and lost, and Ian Smith, the brilliant Kiwi commentator, relives the experience of calling that scarcely believable finale.

We also mark the start of the Men’s Ashes with Jon Hotten’s beautiful piece on the game’s most enduring rivalry, Rob Smyth’s retelling of Warne’s breakthrough series in 1993 through the voices of the batsmen who faced him, and Sam Perry’s essay on Australia’s obsession with pace bowling. To bring us bang up to date, Ben Jones of CricViz highlights the key battles ahead of this summer’s clash.

This issue also includes the arrival of a new columnist in the form of former England and Surrey all-rounder Zafar Ansari, who discusses his conflicted relationship with the game, Elizabeth Ammon on an epic battle for promotion in the County Championship, and our rundown of the 25 best young women’s cricketers in the world.

“To come back on and bowl his cutters, his slower balls, and then a 94mph bouncer with no change whatsoever in his action, that was the moment when I thought: ‘My god, this guy is good’.”
Chris Woakes on the spell when he realised that Jofra Archer is truly a special talent 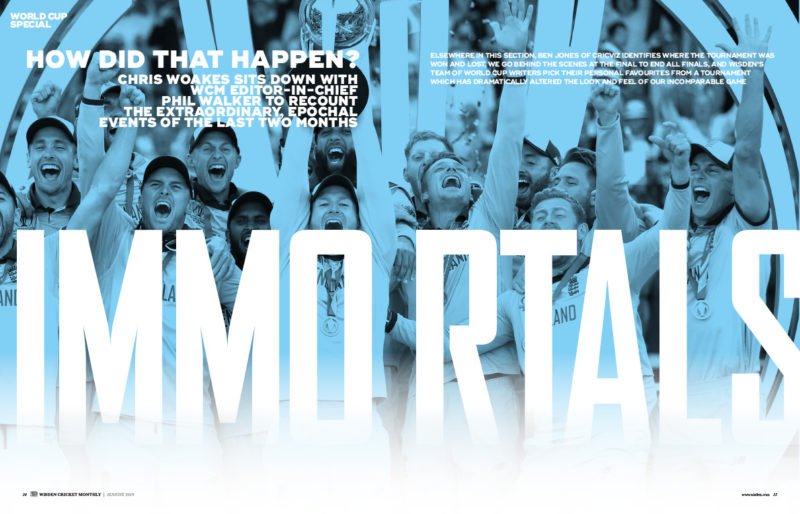 “The British have always been a seasonal, attention-deficient, event-driven public: extremely good at affecting fleeting interest, tuning out just as quickly.”
Jonathan Liew on the uncertain legacy of England’s World Cup win

“I was caught up in the euphoria of it – I didn’t sit down for 15 minutes and nor did Nasser.”
Ian Smith speaks to John Stern about commentating on the final to end all finals

“I now take great pleasure in following matches, but frequently I fall into the trap of lazily criticising batters without actually seeing them bat.”
In his first column for WCM, Zafar Ansari on his conflicted relationship with the game and how it’s changed since retirement 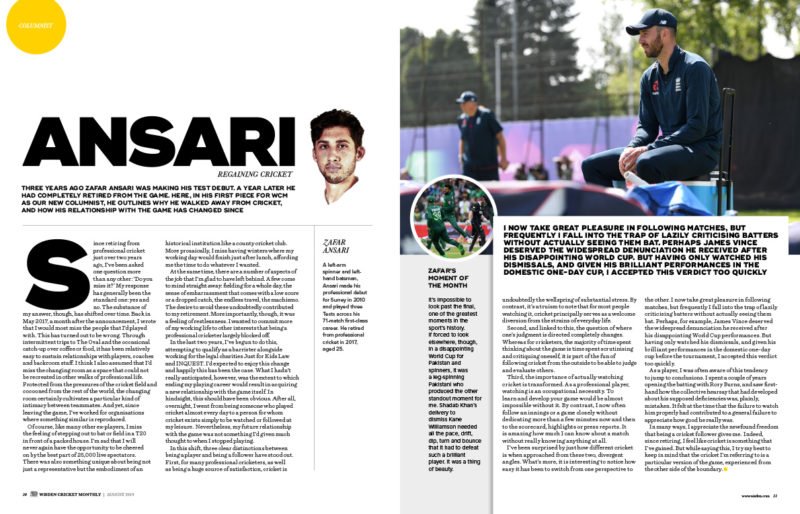 “I faced some of the fastest bowlers in history but Warnie was the one bowler who really intimidated me. Give me Sylvester Clarke on a dodgy pitch over Warnie any day of the week. Clarke might knock me out; Warnie would just get me out.”
Robin Smith speaks to Rob Smyth about the experience of facing Shane Warne 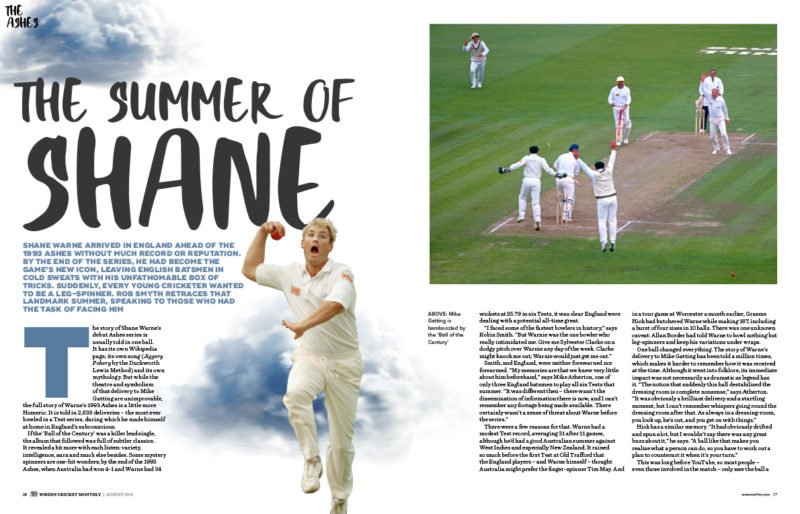 “Only in retrospect can we pick out the rolling cycles that turn through them. The 2005 series ended one cycle and began another, which is in turn about to end.”
Jon Hotten on the weight of Ashes history and how it can’t fail to inform this summer’s series

“Each has the capability to win matches single-handedly, but if Australia are to win, they will all need to fire.”
Sam Perry on Australia’s fascination with fast bowling and how Starc, Cummins, Hazlewood and Pattinson can influence this summer’s series 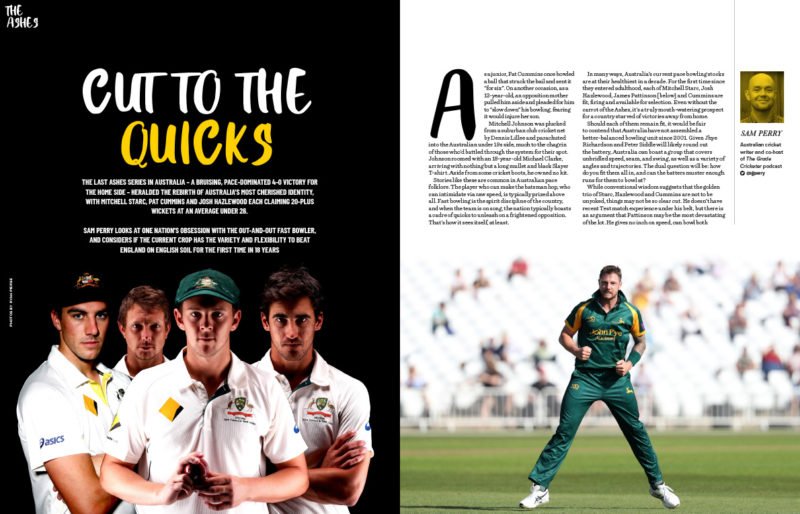 “With the added incentive of three teams being promoted this season, and only 29 points separating second and seventh, it could hardly be tighter at the top.”
County columnist Elizabeth Ammon on a wide-open Championship promotion race, with a couple of surprise names in the mix

“When I got the phone call my reaction was just utter disbelief. Looking back to this time last year, I would never imagine any of these things could happen. It’s all been a bit of a whirlwind.”
England’s Sophia Dunkley, one of the 25 players featured in our list of the best young women’s cricketers in the world, on her surprise call-up for last year’s World T20 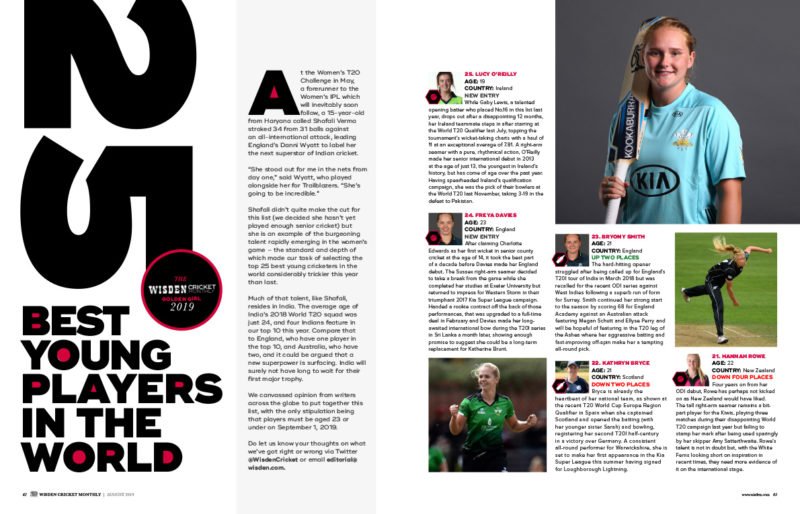 “Before a game the captain took everyone away during the warm-up to make it look like we were going for a run and a stretch, sat us down and said, ‘Look, he’s not going to get sacked – we’ve got to do our best to work with what we’ve got’.”
Our secret county cricketer on what makes a good coach, and what makes a bad one 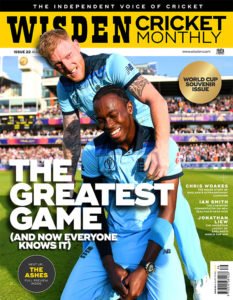