In the latest issue of Wisden Cricket Monthly, out October 25, we look forward to the Women’s World T20 in the Caribbean as England target a second major title in as many years.

Danni Wyatt speaks to Jo Harman about her transformation from bit-part all-rounder to gun opening batter; Nat Sciver tells us she’s not the best player in the world yet but one day could be; Raf Nicholson tracks England’s ‘decade of discovery’ since they lifted the World T20 title in 2009, speaking to the most influential figures in that period; and we have a tournament guide to the World T20, which begins on November 9.

Elsewhere, with the help of analytics experts CricViz, we investigate the strengths and weaknesses of England’s Test batsmen selected to tour Sri Lanka, and Keaton Jennings reflects on a chastening summer which he insists was still “great fun”.

Jonathan Liew is unconvinced by ‘new Australia’, Kumar Sangakkara celebrates Adam Gilchrist in his ‘Titans of Cricket’ series, Suresh Menon celebrates the arrival of India’s teen sensation Prithvi Shaw, and Mike Brearley has some words of caution for Virat Kohli about his captaincy style.

“In the past I’ve played a role that’s unselfish for the team and been a pinch-hitter who smashes it from ball one. But I’m better than that.”
Danni Wyatt on finding a role that suits her at the top of England’s batting order 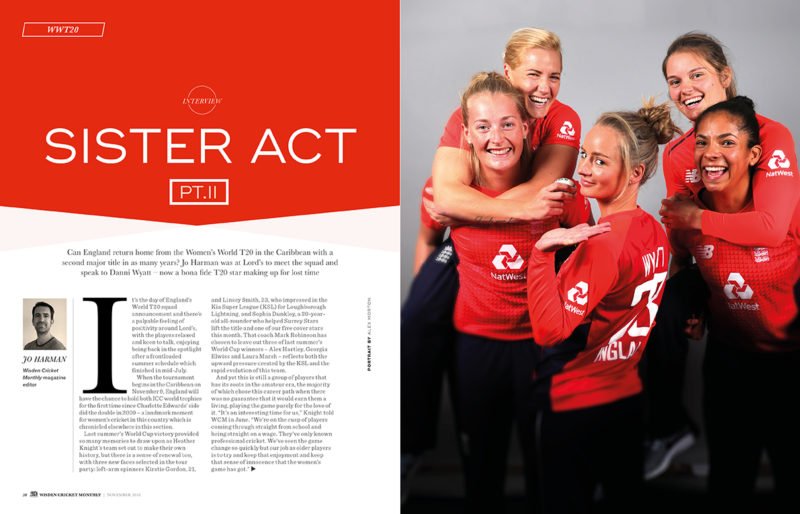 “It was the hardest two years of my whole career. Professionalism turned into a double-edged sword. Suddenly it was our job… there’s quite a lot to lose if you lose your job. It created massive pressure.”
Charlotte Edwards reflects on becoming a full-time professional in Raf Nicholson’s feature on the England women’s side’s ‘decade of discovery’

“If sport has taught us anything over the years, it is that we should always be vaguely suspicious of anybody promising to remake a culture. This isn’t like rebranding a breakfast cereal. It’s a national inheritance, and when you’re dealing with the sporting psyche of an entire people, change occurs only by excruciating degrees.”
Jonathan Liew on the battle for the soul of Australian cricket

“A few years ago I promised myself something – that regardless of what’s happened the previous day, I would wake up the next morning with a smile on my face and go again.”
As part of a special feature in association with CricViz in which we analyse the strengths and weaknesses of England’s Test batsmen, Keaton Jennings tells us he’s undeterred by a difficult summer 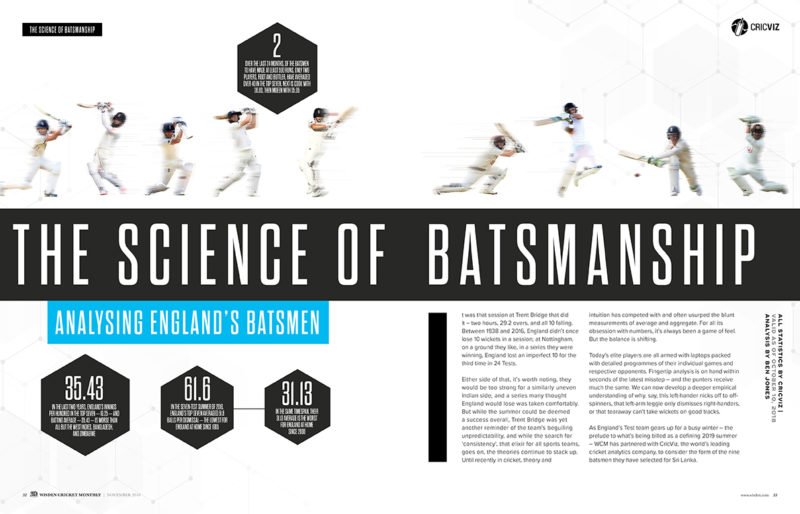 “To appreciate Jos Buttler and what he can do for you requires a leap of faith. It requires you to give maximum license to your wildest imaginings. It requires you to become a child again, when it was you scoring those runs in front of adoring crowds and being garlanded with unalloyed praise. But you know, now, that you can’t do it. You know, deep down, you could never have done it. But you don’t need to have done it, because Jos Buttler can do it all for you.”
Daniel Norcross really likes Jos Buttler

“In the past we’ve made signings where it’s been a case of, ‘Right, we haven’t got an overseas player for T20 and it starts in a week, so who’s available?’.”
Kent captain Sam Billings says the club have found new direction after returning to Division One of the County Championship for the first time in nearly a decade 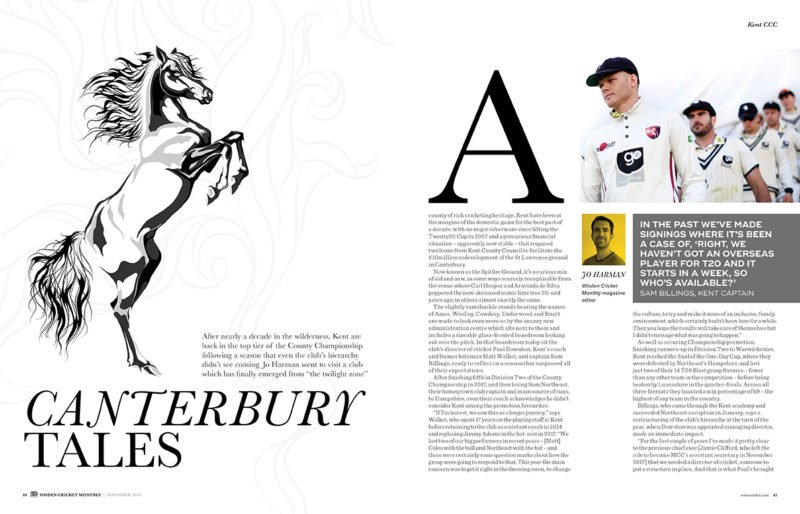 “A wicketkeeper’s life used to be simple. They would earn a living by being the best gloveman in the side. Suddenly that changed. With Gilchrist, it became an all-rounder’s role, where competency with the gloves was essential but you had to be a match-turning batsman down the order. Wicketkeepers realised that the heat was on for them to redefine themselves as batsmen of worth as well. Keepers all around the world were in complete distress! Test cricket was forever changed.”
Kumar Sangakkara picks out Adam Gilchrist as his next ‘Titan of Cricket’

“Mumbai’s cricket culture ensures that a boy, once acknowledged as special, then lacks for nothing. Shaw was 12 when a well-wisher gave him a room closer to his team’s ground. At 14, he was offered a sponsorship of 3.6 million rupees by SG, the equipment manufacturer. In between, another benefactor paid for annual trips to England for cricket and academics.”
Suresh Menon on the arrival of India’s next superstar, Prithvi Shaw 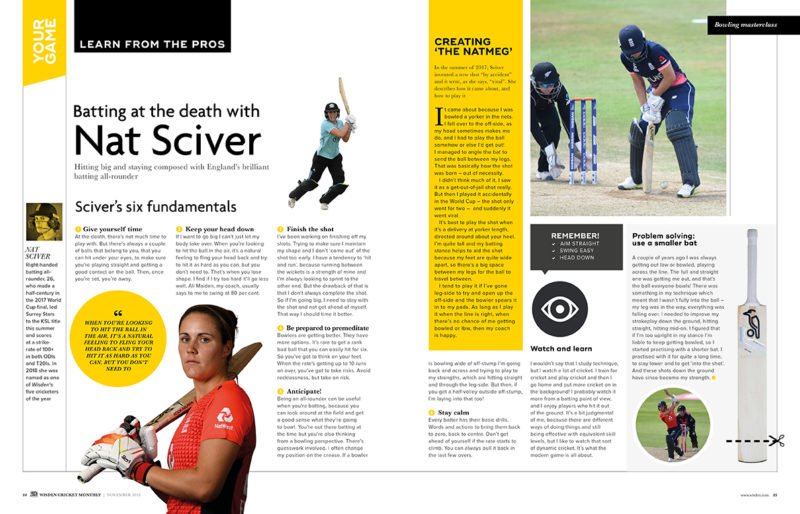 “For a brief, sunlit capsule of time, I watched my favourite cricketer of my formative years elevate batting from the prosaic resistance of the first five hours of the day into an unforgettable expression of sporting beauty.”
Andy Zaltzman picks out Gower’s final Test century on home soil as his favourite ever innings

“He brings with him an assortment of strange-looking kit. The stickers on his bat are unrecognisable to the average antipodean, a classic cricketer’s ploy to signify worldliness. Club issued shorts will be replaced by his English club’s shorts, partly because it’s universally understood that English cricket kit is aesthetically superior to Australian kit and also because he is now 8kg heavier than he was when he left, and these are the only shorts that fit him.”
In his new column ‘Faking the Grade’, Sam Perry reports from Australia’s fabled fields of misery on the dubious benefits of an off-season spent in English club cricket 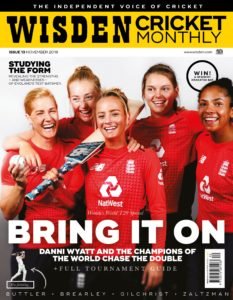