More than 130 years after a team made up entirely of Parsees arrived in the UK for India’s first international cricket tour, a group from England travelled in the opposite direction to honour those pioneers. Charlie Inglefield, a member of that party, explained the significance of the 1886 tour and why it should be remembered in issue 16 of Wisden Cricket Monthly.

On December 1, 2018, Virat Kohli and his team were finalising their preparations for the much-anticipated first Test against Australia in Adelaide. On the same day, 9,000 km away, the Charles Alcock XI were taking on a Parsee XI at the Parsee Gymkhana ground on Mumbai’s famous Marine Drive. The match was a tribute to the first ever tour to the UK by an Indian team in 1886 – a tour party made up entirely of cricketers from the Parsee community.

What we recognise as Indian cricket today could not have been more different from its humble and understated origins in 1886. This team were truly pioneers.

This piece of cricket history has been brought back to life by Matt Greenwell, an English businessman who has lived in India for the last 10 years and co-founder of the 1886 Trophy with Khodadad Yazdegardi, the vice president and secretary of Parsee Gymkhana. Greenwell, a self-confessed cricket tragic, read up on the 1886 tour and took particular interest in the Parsee connection. 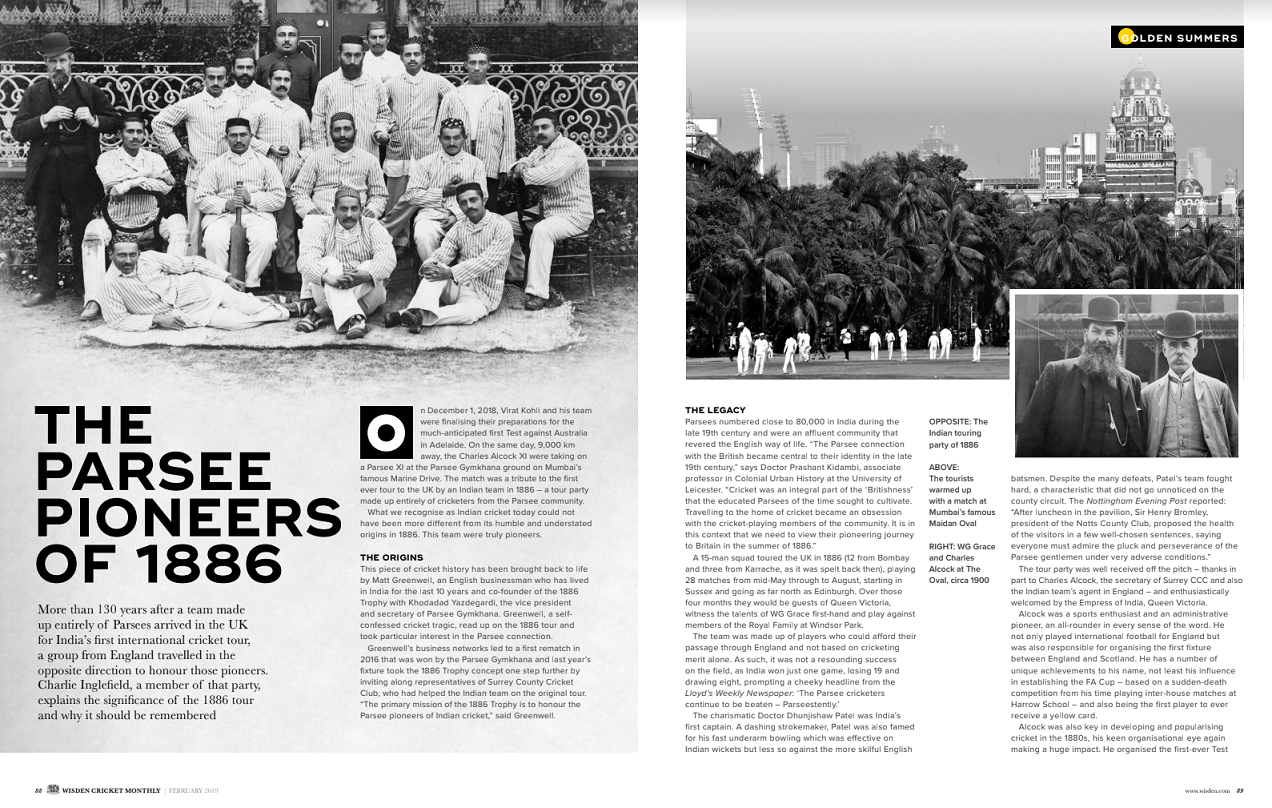 Greenwell’s business networks led to a first rematch in 2016 that was won by the Parsee Gymkhana and last year’s fixture took the 1886 Trophy concept one step further by inviting along representatives of Surrey County Cricket Club, who had helped the Indian team on the original tour. “The primary mission of the 1886 Trophy is to honour the Parsee pioneers of Indian cricket,” said Greenwell.

Parsees numbered close to 80,000 in India during the late 19th century and were an affluent community that revered the English way of life. “The Parsee connection with the British became central to their identity in the late 19th century,” says Doctor Prashant Kidambi, associate professor in Colonial Urban History at the University of Leicester. “Cricket was an integral part of the ‘Britishness’ that the educated Parsees of the time sought to cultivate. Travelling to the home of cricket became an obsession with the cricket-playing members of the community. It is in this context that we need to view their pioneering journey to Britain in the summer of 1886.”

A 15-man squad toured the UK in 1886 (12 from Bombay and three from Karrache, as it was spelt back then), playing 28 matches from mid-May through to August, starting in Sussex and going as far north as Edinburgh. Over those four months they would be guests of Queen Victoria, witness the talents of WG Grace first-hand and play against members of the Royal Family at Windsor Park.

The total number of Parsees worldwide is now estimated to be around 80,000. For such a vibrant and unique community that is a tragically small amount

The team was made up of players who could afford their passage through England and not based on cricketing merit alone. As such, it was not a resounding success on the field, as India won just one game, losing 19 and drawing eight, prompting a cheeky headline from the Lloyd’s Weekly Newspaper: ‘The Parsee cricketers continue to be beaten – Parseestently.’

The charismatic Doctor Dhunjishaw Patel was India’s first captain. A dashing strokemaker, Patel was also famed for his fast underarm bowling which was effective on Indian wickets but less so against the more skillful English batsmen. Despite the many defeats, Patel’s team fought hard, a characteristic that did not go unnoticed on the county circuit. The Nottingham Evening Post reported: “After luncheon in the pavilion, Sir Henry Bromley, president of the Notts County Club, proposed the health of the visitors in a few well-chosen sentences, saying everyone must admire the pluck and perseverance of the Parsee gentlemen under very adverse conditions.” 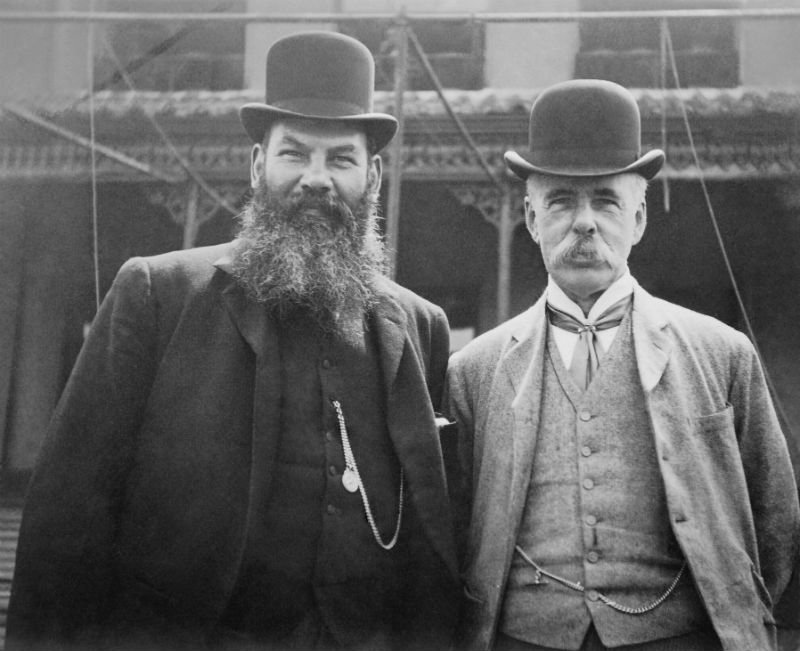 The tour party was well received off the pitch – thanks in part to Charles Alcock, the secretary of Surrey CCC and also the Indian team’s agent in England – and enthusiastically welcomed by the Empress of India, Queen Victoria.

Alcock was a sports enthusiast and an administrative pioneer, an all-rounder in every sense of the word. He not only played international football for England but also was responsible for organising the first fixture between England and Scotland. He has a number of unique achievements to his name, not least his influence in establishing the FA Cup – based on a sudden-death competition from his time playing inter-house matches at Harrow School – and also being the first player to ever receive a yellow card.

Alcock was also key in developing and popularising cricket in the 1880s, his keen organisational eye again making a huge impact. He organised the first ever Test match, between England and Australia in 1880, and was instrumental in ensuring that the Parsees were well looked after and had high-profile fixtures during their 1886 tour.

To recognise both Alcock and Surrey’s contributions, Greenwell renamed his team the Charles Alcock XI for the 2018 rematch. “We wanted to represent the legacy of Charles Alcock because of his role in ensuring that the 1886 tour was a success,” he said.

The Charles Alcock XI did have one similarity to the touring Parsees of 1886, which was that they too were not selected on cricketing merit alone. Three matches were played in four days, culminating in the 1886 Trophy fixture versus Parsee Gymkhana.

During the tour the squad enjoyed the company of Farokh Engineer, the legendary Lancashire and Indian wicketkeeper. Engineer is a proud Parsee and Indian, and talked about the way the Parsees live their lives. “The Parsee faith is based on three very simple principles,” he said. “Good thoughts, good words and good deeds.” 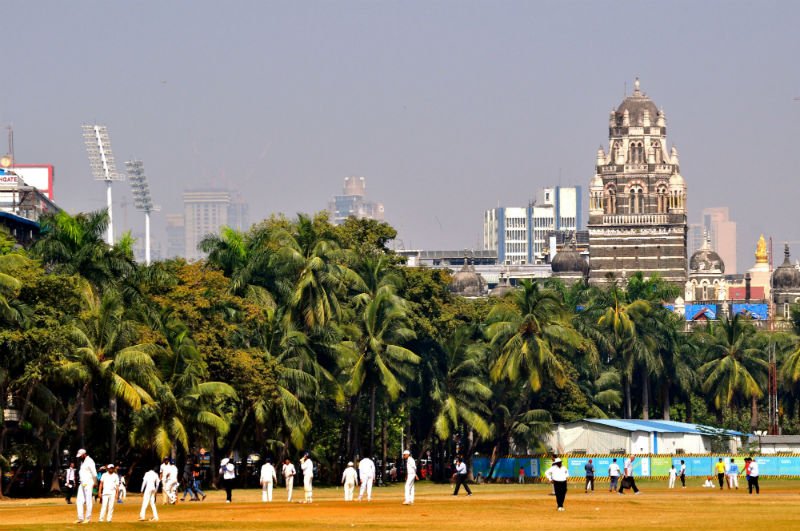 The Charles Alcock XI had two T20 warm-up games. The first was as guests of the Cricket Club of India at the renowned Brabourne Stadium in Mumbai – the same venue that Engineer and his brother would come and watch their heroes like Denis Compton. The second was against an Academy XI at the majestic Maidan Oval. This beautiful 22-acre park is cosily tucked into Mumbai’s metropolis and while we were playing, there were half a dozen other cricket matches going on at the same time.

These two games were the prelude to the 1886 Trophy match against Parsee Gymkhana, who proved to be wonderful hosts. Their picturesque ground would have had Henry Blofeld bursting with excitement given how many pigeons were flying around the outfield. 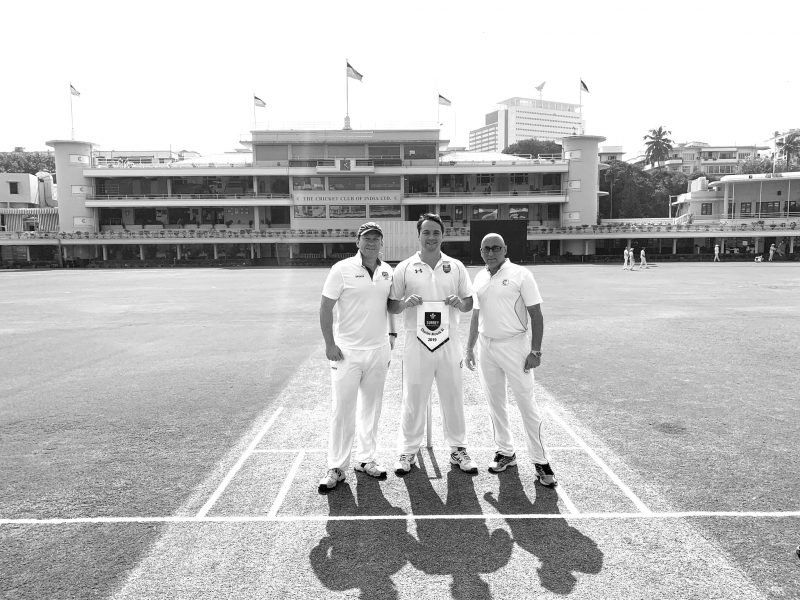 The day started with a delicious Parsee breakfast that included akuri, a runny scrambled egg. Suitably fed, the British and Indian national anthems soon followed and the Alcock XI won the toss, putting the Parsees into bat. A challenging target of 211 off 30 overs was set and subsequently chased down by the visitors with a couple of overs to spare.

A special mention must be given to the two commentators who kept everyone entertained throughout the day. During the Parsee innings this author made the schoolboy error of letting the ball slip through his legs on the boundary. The commentary team didn’t miss a beat: “Unfortunately errors in the outfield do happen, and that was a particularly bad one.”

Related Story: Why India decided against withdrawing from Australia tour after ‘Monkeygate’

During the post-match ceremony both teams agreed that the tradition of the 1886 Trophy should continue. The total number of Parsees worldwide is now estimated to be around 80,000. For such a vibrant and unique community that is a tragically small amount. In a very small way the 1886 Trophy has helped to bring back to life an important part of Parsee culture, and cricket’s heritage in general.

The Parsee Gymkhana cricket team will face Surrey CCC’s Charles Alcock XI for the third edition of the prestigious 1886 Trophy on August 23, 2019, at The Oval, 133 years after an Indian Parsee team last visited these shores.

This article was first published in issue 16 of Wisden Cricket Monthly. Subscribe here.