In issue 24 of Wisden Cricket Monthly, former England captain Michael Vaughan spoke to John Stern about his Twitter persona, the importance of luck, and taking inspiration from Patrick Swayze.

It’s largely down to Patrick Swayze apparently. We’re not talking Dirty Dancing, though viewers of the 10th series of Strictly Come Dancing in 2012 might have their own opinions. No, Michael Vaughan claims that he learned valuable life lessons from the 1989 film Road House in which Swayze plays a bouncer in a small-town Missouri bar. “Be nice,” is Swayze’s mantra to his staff, regardless of the booze-fuelled provocation coming their way.

Vaughan’s point here is the need for an international captain to maintain a certain distance, particularly with the media. “Many times I walked into a press conference and wanted to fire into people but you’ve got to be nice,” he tells WCM. “Road House taught me a lot – try and be nice, try and be humble, but in the back of your mind you’re thinking, ‘You t***’.

“I’d say the public perception of most people is wrong – with me I think it’s completely wrong. I think that’s part and parcel of leadership, which is why Eoin Morgan is such a good leader because none of us knows who he is. If people know who you are then I think it’s tough to be a leader. You’ve got to have that little bit of myth.” 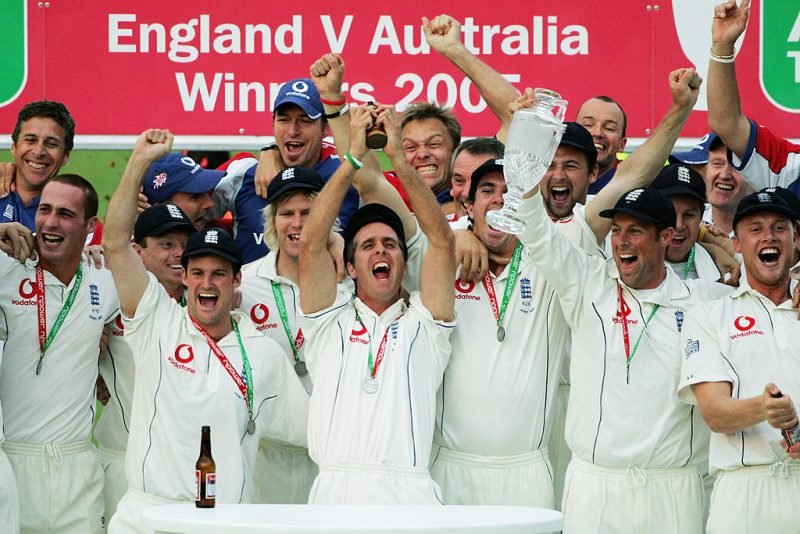 Vaughan says his father Graham taught him everything – well, until Swayze took up the unheralded leadership mentor role. “Dad was a good people-person and he used to say, ‘Just don’t give anything away, try to stay level, whether you’ve done well or not’. That’s what I tried throughout my career. It’s hard to do.”

Vaughan is the one doing the mentoring now, keeping an eye on his “pal from Sheffield”, England’s Test captain Joe Root. “I just try and make sure he’s all right because I know how hard it can be when people are at you or questioning you.” Vaughan acknowledges the hypocrisy of that comment – “I’m as much to blame as anyone in terms of the media pointing fingers at people” – but his view is that players have to roll with the punches.

“The role of the pundit is to get into the minds of the players and you need hard words sometimes. As a captain, I was as harsh and to the point as any because I only ever wanted people to work as hard as they could to maximise their ability.”

So it wasn’t awkward to accuse Jonny Bairstow of a “negative, pathetic mindset” during the World Cup? “No, because he deserved it. I was criticised many times throughout my career when I was playing poorly or not preparing right or taking the game a little bit too easy, playing shots that weren’t on. When I see players going through the motions with all the talent that I know they have, I’ll give them a volley.”

Vaughan seems willing to give anyone a volley, particularly on Twitter where he has had verbal set-tos with, among others, Mark Butcher and Mark Ramprakash (about politics) and David Warner’s wife Candice about the abuse being dished out to her husband last year in South Africa. Vaughan asserts that people take Twitter “too seriously” and that he is essentially acting out a part. “There’s me and then there’s me on Twitter,” he says. He was an early adopter of the social media platform, signing up a decade ago, and has 1.2m followers, the sort of number that excites potential sponsors or employers.

The former Ashes-winning captain was often described disparagingly as “busy” by the Daily Mail’s waspish sports diarist Charles Sale, implying that he has fingers in a lot of pies, which he does. In 2015, he was interviewed by the Financial Times for their ‘My First Million’ feature, which suggests he’s not doing too badly.

The England Test side

“They say all the right things but the batting lets them down. They seem to have this go-to mode that is consistently inconsistent. When the ball is doing something and they’re under pressure, I still don’t think they’ve got the mindset to dig it out. We know they can do it, but I don’t think it’s in their DNA.”

“I’ve never known a captain who can brush aside his team’s bad performances – that’s a part of captaincy and it’s 24/7. When things go right you think you’re doing everything right, whereas now I’m 44, and looking back at my reign, I think I got too much praise and I also got too much criticism.

“We make captains sound like these incredible human beings. Having won the World Cup, Eoin Morgan is rightly lauded as a great leader but he had good players. In 2005, people said I was calm under pressure and made the right decisions, but I had great players playing for me. I had four unbelievable bowlers and I won the toss in the last three Test matches and made sure we batted first. I called wrongly at Edgbaston but Glenn McGrath fell over the ball. At Headingley, Ben Stokes produced the greatest Test innings I’ve ever seen, and that’s not down to the captain.”

“I like it. Cricket needed something new. I don’t think we’d have needed it if in 2005 we’d kept the county T20 on terrestrial TV. We keep saying that Test match cricket is the pinnacle, yet it’s the one format that we’re not going to see on free to air. Sky pay all the money and have done an unbelievable job. The amount of criticism that Sky get throughout the game is disgraceful. County players now get a good wage, the women’s game and the grassroots have grown a huge amount. I just wonder whether we could have one Test match a year on free to air, maybe the Lord’s Test match.”

He says he didn’t anticipate working as a broadcaster but following his resignation as England captain in 2008, Jonathan Agnew drove to Scarborough where Vaughan was playing for Yorkshire. “He didn’t have to do that and I’ve always been very loyal,” says Vaughan. “He said, ‘I’d love you to join Test Match Special’. I was close to signing with Sky but I enjoyed the radio straight away and I’ve enjoyed the highlights show [with Channel Five]. Over the years I’ve done more and more with TV on Fox in Australia and the IPL. I’ve been lucky in life, lucky in my career and lucky in the broadcast room, because I’ve had good people around me.” 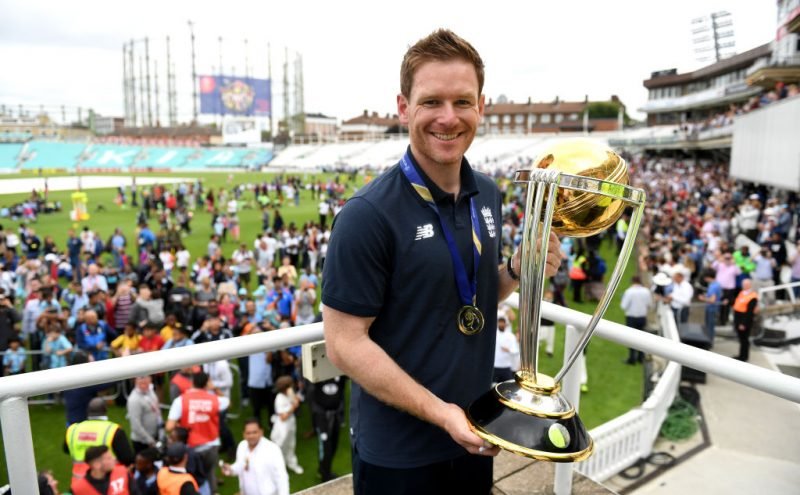 And while we’re on the subject of luck, does he ever wonder how things might have turned out for him if Glenn McGrath hadn’t trodden on that ball at Edgbaston on the morning of August 4, 2005? “The older I get the more I realise how much luck plays a part,” he says. “But I do believe that if you do the right things over a period of time then you will get your reward. From 2003 to 2005 I did enough right in terms of selection and the dynamics of the team, knowing that [Andrew] Flintoff was so important and realising that [Kevin] Pietersen, [Simon] Jones and [Steve] Harmison all needed some loving. We got our rewards in ’05 because of the work we had done in the previous two years and I think Eoin Morgan earned the right to that piece of luck in the World Cup final for everything he did right in the previous four years.”

Even in such a momentous summer for the English game, Vaughan, retired for a decade, says he gets no pangs for playing. “Over 20 years I eked out all my enjoyment of playing… but in an ideal world I’d have played for two or three more years.” That’s not to say he has committed to the commentary box forevermore. In 2015, Vaughan put himself forward, quite publicly, to replace Paul Downton as the England men’s team MD. “The job went to Andrew Strauss and I recall a senior ECB board member telling me sniffily at the time that he and his colleagues took a dim view of “people who put their CVs in the Daily Telegraph”, a reference to the content of Vaughan’s newspaper column at the time.

“I’d want to be running the team,” Vaughan says. “I’d want to be around players and people. With the Strauss position my name was mentioned but within a week I knew it wasn’t going to be me, I wasn’t interested. I met Tom [Harrison, ECB chief executive] and said it’s not for me, it’s a desk job. I’m more of a people person, I need to be among people. A lot of the businesses I’m involved with are people based. Communication, managing and making sure people know what they’re about and making sure people understand that they’ve got to work hard. Maybe in time… we’ll have to see.”

David Gower once described life in the commentary box as much the same as life in the dressing room – “It’s just the wine’s more expensive”. So in that sense it’s hard to see the attraction for Vaughan to be involved on an official basis with the England team. As a confidant of Root, he is already closer to the action than most. And he says: “I absolutely love watching the game, I love just being able to study the game without that fear of failure and fear of letting people down, the horrible feeling you get when you’ve got no runs and you’ve lost the game.”

Watch this space, because with Vaughan you never quite know what he’s going to do, say or tweet next.