As part of a series brought to you in association with Proatar, the Australian fast bowler-turned-coach Jason Gillespie picks out the high points and hurdles from his technical journey. First published in issue 24 of Wisden Cricket Monthly.

I changed a lot as a bowler. I started as a young tearaway with a very long run-up. In my first season of Sheffield Shield cricket I would bowl quite a few no-balls – which cost two runs at the time – and, coupled with that long run, I’d sometimes bowl five- or six-minute overs. My captain would say, ‘Look, you’re a good young bowler but we can’t afford to be behind the over-rate’. That was something I needed to improve.

Our physio at South Australia was a bloke by the name of Steve Saunders who’d been a hurdler in the Commonwealth Games and done a bit of long jump as well. As a non-cricketer he couldn’t get his head around how you could bowl a no-ball. He said, ‘As a hurdler over 110m, we have to know exactly how many steps we take and the strides between each hurdle. As a long jumper, if we’re half an inch over the line three times, that’s four years of work out the window’. That really resonated with me. I started to work really hard to know everything about my run-up and my no-ball problem went away. 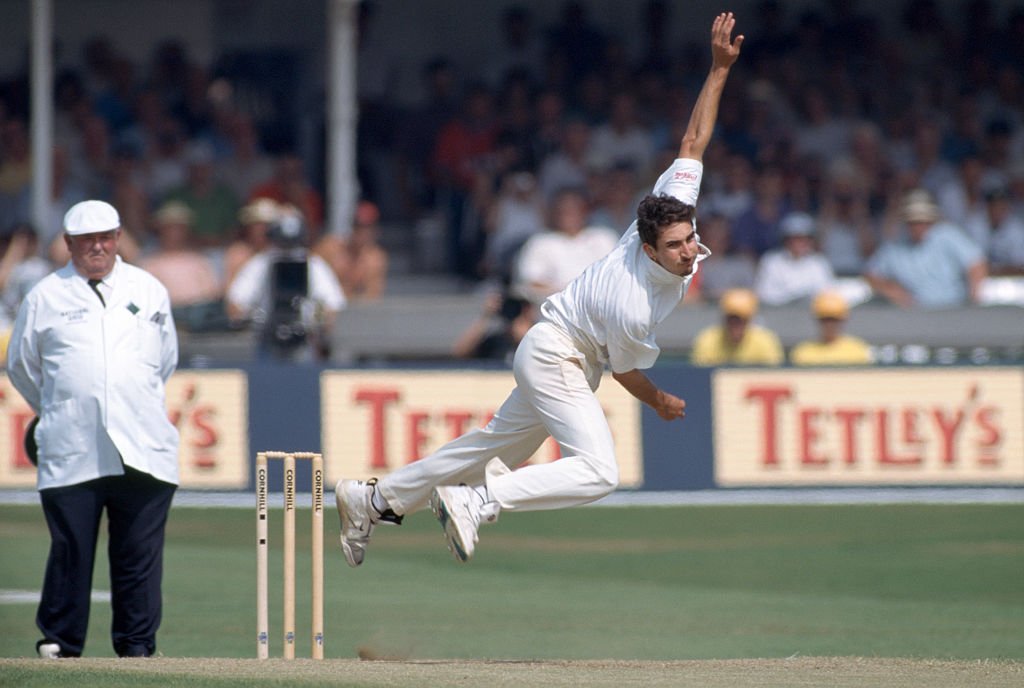 Jason Gillespie bowls during the 1997 Ashes

Later, I felt that my run-up was too long but my ego wasn’t allowing me to shorten it. I thought, ‘I’m a fast bowler, I’ve got to steam in from the 30-yard circle’. But it wasn’t efficient. I had a couple of conversations with Greg Chappell, who was coach of South Australia at the time, and decided to shorten it a little bit. Instead of coming in from 35 or 36 metres, it was 25 or 26 metres. I found that I could bowl with the same pace and for longer.

I say I was a tearaway but I was very much into the craft of bowling. I worked especially hard on my wrist position. I worked as hard on that as anything. And I became more in tune with my action as my career progressed. If I wasn’t bowling well enough I could pinpoint a couple of things that would help me. One big thing for me was that I had a tendency for my front foot to come too far across on landing, angling towards fine-leg. That meant I was twisting more in my action, putting pressure on my back and my hip torque would be more pronounced, making it harder for me to land the ball where I wanted. I was never perfect at it but I continually worked on minimising that crossover during my career.

Later, I felt that my run-up was too long but my ego wasn’t allowing me to shorten it. I thought, ‘I’m a fast bowler, I’ve got to steam in from the 30-yard circle’. But it wasn’t efficient

I always tried to be the best version of me. I’d be playing cricket in the backyard with Dad, my mates or my brothers and they’d say, ‘Who are you going to be?’ They’d pick Allan Border or Dennis Lillee and I’m going, ‘Well, I’m Jason’. I’m not trying to blow smoke up my own arse but I felt that was something I could do – to be out there playing for Australia. I didn’t want to pretend to be someone else.

Like every kid I’d see what my heroes did and try things. I used to copy Craig McDermott’s action, or Dennis Lillee’s action, but I always came back to being me. I don’t coach technique at all with the players I work with now. I encourage players to be the best version of themselves. For me, that’s really important.

Everyone thinks bowling in India as a seamer is a bit of a graveyard, but I really enjoyed it. I actually really enjoyed bowling on wickets that were pretty unresponsive. If you walk off the park and you’ve done a job for your team, whether you’ve taken wickets or minimised the run rate, I always found that really satisfying. Taking 2-40 off 20 overs in India was as satisfying for me as a five-for in England or Australia.

From 2001 to 2004 were probably the years where I was bowling at my best. I was in tune with what I was doing, I was really clear in my mind and my fitness was really good. I’d overcome a few niggles and I was feeling confident and doing an important job for the team. It was an enjoyable time.

I had a pretty poor time in the 2005 Ashes. When I got back to South Australia I spoke to a couple of people and the consistent theme was I was getting across myself on my front-foot landing, as I mentioned earlier. I was almost looking for the silver bullet on that tour. I was messing around with my run-up and looking for things that weren’t there. It was a battle. When something’s going on with a player and they’re not performing well, you can almost always take it back to them overthinking things. It happens a lot and it’s no coincidence. Then I got back to South Australia, really simplified things, and had a very good Shield season. That was probably the one time I was found wanting but to give England credit they targeted me and had a bit of success. I got dropped before I could rectify it but if I was the Australian selector or captain I would have made the same decision.

Related Story: Warne, Moody and Gillespie explain why the standard of Sheffield Shield cricket is falling

If players ask me about my career and my experiences, of course I’ll share them. And I’ll certainly share my 201 not out story! But as a general rule I try to avoid talking about my own career and saying things like, ‘Oh, when I played the game…’ because most of the time it’s irrelevant. When you go into coaching it’s not about you. It’s about the player and how you can help them.

Jason Gillespie is one of the legends of cricket available on Proatar, the coaching and mentoring app. Send a video of your skills and get it analysed by Dizzy. Download the app and use code PRT10WIS to get 10% off your first booking.