Having overcome a difficult period in his career when he was afflicted by self-doubt, Jason Roy is hopeful he will get the opportunity to show he can transfer his white-ball skills to Test cricket in this summer’s Ashes series.

Roy started the World Cup in blistering form, following up a half-century in England’s opener versus South Africa by hitting 153 from 122 balls in the victory over Bangladesh at Cardiff – his third 150-plus ODI score, equalling Andrew Strauss’ England record – before tearing his left hamstring in the field against West Indies.

He has since sat out the matches versus Afghanistan and Sri Lanka but has targeted a return for England’s encounter with Australia at Lord’s on June 25.

Eoin Morgan recently highlighted the improvement in the Surrey opener’s temperament, arguing that he has “every attribute to be a Test cricketer”, and Roy, who will be 29 when the Ashes begins on August 1, believes he is in the “best place” to make a success of the longer format.

"I wasn’t confident but I was trying to give off the bravado that I was confident, and playing stupid shots"

“I think England know what I’m capable of,” says Roy in the latest issue of Wisden Cricket Monthly, which is available to buy now. “They’ve definitely thrown a lot of encouragement my way. Ed Smith and Rooty have been big backers for me to push my case for Test cricket. I’ve just got to score a volume of white-ball runs.

“Who knows whether I would succeed or not, but I like to think I’m in the best place now [to do so]. I think you’ve just got to adapt mentally. The technical side of things, as I’m an opener, doesn’t have to change a huge amount. I kind of just want to prove it to myself more than anyone else whether I can do it, and just putting the cap on would be pretty special.” 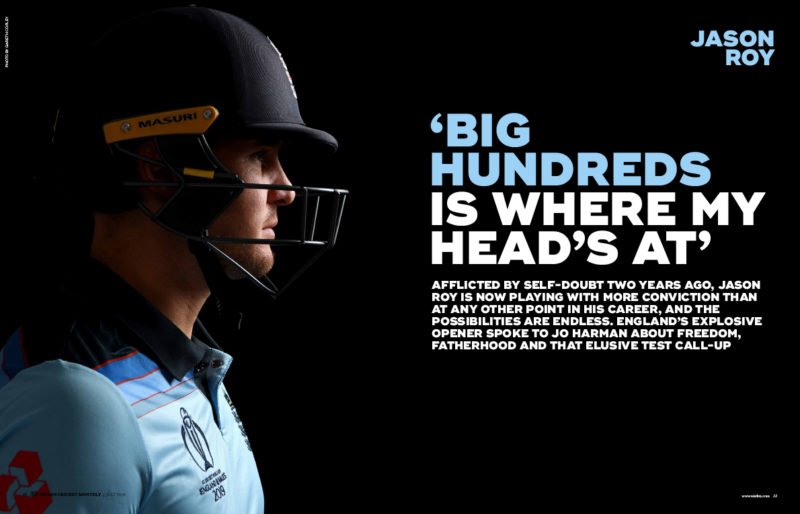 Roy goes on to say that the experience of being dropped before the 2017 Champions Trophy semi-final defeat against Pakistan, after a run of six single-figure scores in eight innings, was a watershed moment in his career.

“I probably wasn’t able to put my finger on what I was doing wrong and instead of identifying the mistakes I was making I tried to hit my way out of it,” he says. “I tried to do little things that wouldn’t even work if I was in form.

“I wasn’t confident but I was trying to give off the bravado that I was confident, and playing stupid shots. I guess that’s something I’ve learnt – that if I’m struggling then maybe just take it back to the drawing board and do the basics well for the first 10 overs, see where I’m at and go from there. Don’t hit my way out of it. It doesn’t work.

“I got too overwhelmed by the negativity, a lot of the press stuff. I was being a bit, not childish, because everyone looks at it, but letting it affect me probably a bit too much. Since then I’ve just learned that that’s people’s opinions and no one’s opinion matters more than my own. I just took myself away and worked hard and trained hard and became a better player.” 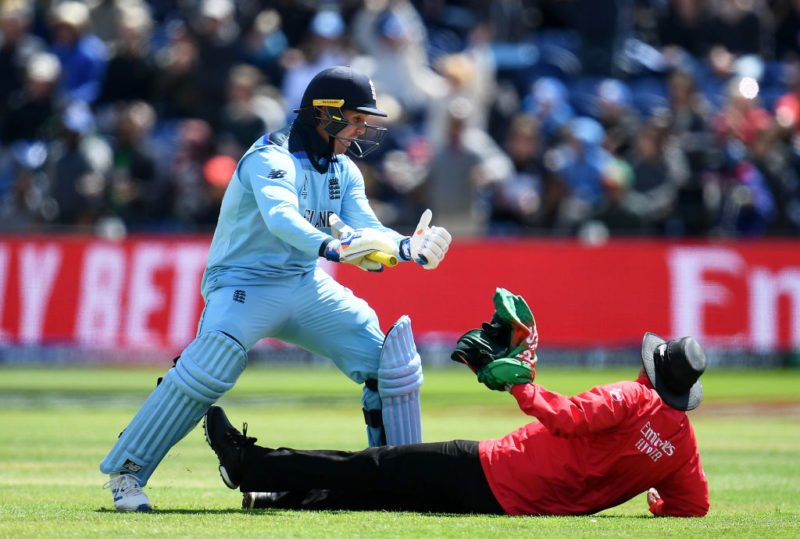 Roy is muscling his way into Test contention

Exactly how good a player he is remains to be seen until England take a chance and hand Roy his Test cap.

By handing a recall to Jos Buttler last summer, national selector Ed Smith has already shown himself willing to pick players for Test cricket who are short of match practice against the red ball (and, encouragingly, no England batsman has scored more runs than Buttler since his return to the team).

If Roy can shake off his injury and continue the form he has shown at the World Cup, his selection for the Ashes could be impossible to resist.

To read the Jason Roy interview in full, and a feature revealing the top 40 young men’s cricketers in the world, pick up a copy of Wisden Cricket Monthly 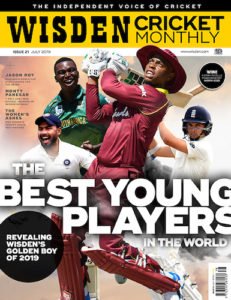