In Liam O’Brien, England’s physical disability team now have a poster boy ready to smash stereotypical narratives out the park.

It’s paradoxical, given how tough and unsparing it can be, that disability cricket continues to confront issues of ‘credibility’. As Ian Martin, ECB’s head of the game, wearily attests, “It’s one of the battles we have”.

Plenty marvelled at the clip of Liam Thomas, fielding in the deep for England’s physical disability (PD) side against Pakistan a couple of years back, losing his prosthetic leg before returning a pinpoint throw over the stumps. But that in itself is part of the ongoing challenge for mainstream acceptance – do those internet shares and retweets tell us more about the appreciation of Thomas’ extraordinary balance and fielding skill, or some vague perception of his ‘bravery’?

Viewed like that, it appears to be the ultimate backhanded compliment to a bloke just getting on with his job. He said himself he couldn’t understand what all the fuss was about. 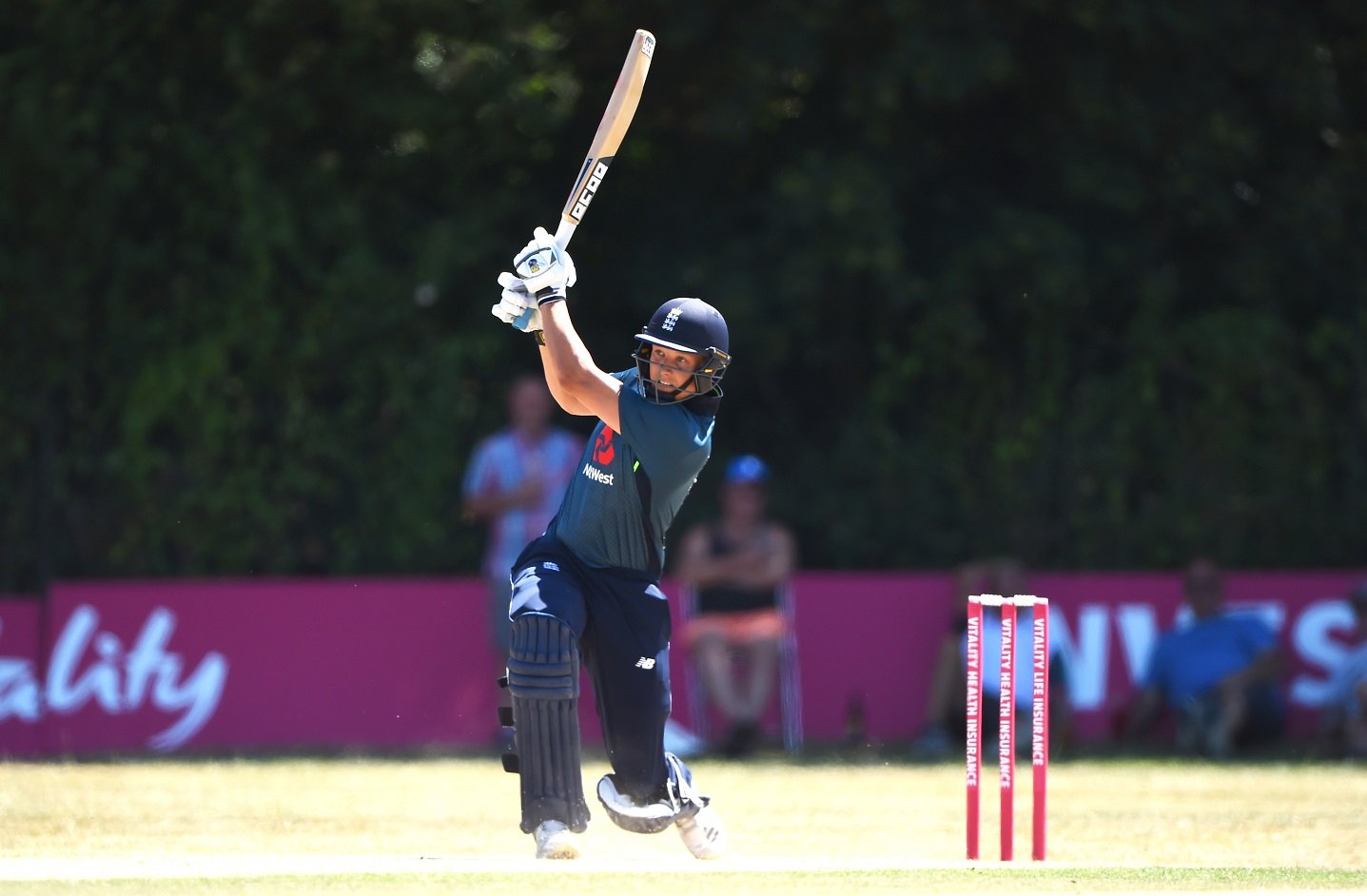 Still, if Liam O’Brien has anything to do with it, stereotypical narratives around disability cricket could soon be consigned to the bin. Not yet 20 years of age, O’Brien is aiming to do for disability cricket in this country what Anya Shrubsole and England’s World Cup winners have done for the women’s game.

Those who saw his incendiary 40-ball 75 – this with his side 42-6 chasing 190 – against Pakistan in his debut one-day series for England’s PD side last summer talk about it with due reverence. This was something else, a whirlwind of fours and sixes that silenced a side fabled for on-field advice.

O’Brien’s no slouch with the ball, either. Sending it down in excess of 70mph at his quickest, his variations and skill – particularly at the death – also saw him finish that series as England’s top wicket-taker. Remarkable for a bloke whose ankles won’t allow him to sprint or jump into his delivery stride.

O’Brien’s achievements scooped him the Lord’s Taverners Disability Cricketer of the Year for 2018, as well as recognition from the Cricket Writers’ Club. The irony of his story, and its uniqueness, is that until two years ago he refused to consider himself disabled at all. 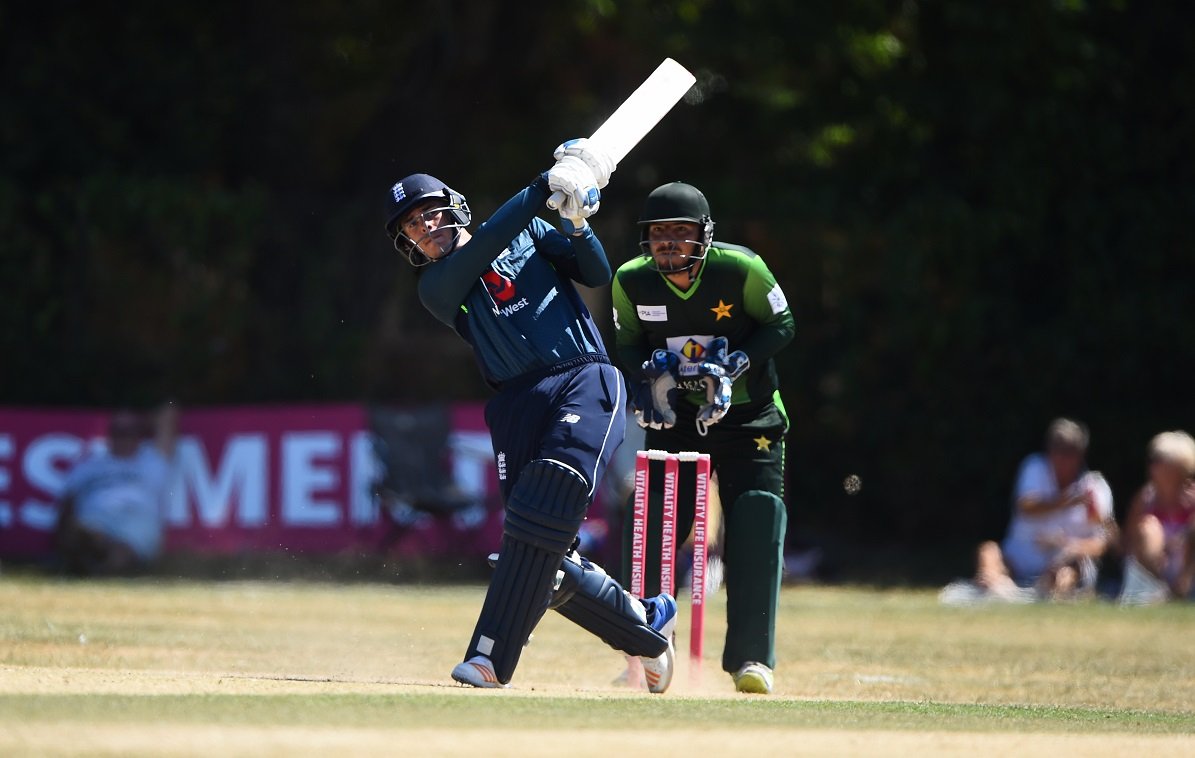 Born with bilateral talipes – club feet, to you and me – O’Brien and his parents hid his condition by refusing to accept it, effectively trying to bend the world to their will.

Obsessed with the game since he was six, he vividly recalls his introduction, a chance televisual sighting of Adam Gilchrist in 360-degree carnage mode. “I thought, ‘I want to do that – hit the ball as far as I can’.” He advanced through Sussex’s academy groups, but was told by doctors at 13 that he shouldn’t do sport “if it hurts that much”. That wasn’t the advice he was after. “I thought: ‘Sod that – I’m going to do it anyway’.”

His throwaway anecdotes make you gulp – “I didn’t really wear shorts in public until I was 14,” he says. “I knew my feet looked funny, and they used to hurt a lot, but I just thought it was a kind of thing. Not all my mates even really know now.”

He even practised “walking straight” in the mirror to avoid mockery and detection. It does, he admits now, sound brutal. But what might sound heartbreaking to those who don’t know him has lent O’Brien an inner strength that is instantly obvious, yet – vitally – is delivered without a hint of self-regard.

When you think 'disability', you think limitation and weakness. There’s always a battle to overcome, a hurdle to clear

Eventually, paranoia at outing himself in pursuit of his professional dream and exposing himself as “a con” won out. Even then, when the extent of his physical limitation was assessed to determine eligibility for disability cricket – he is good enough to bat in the top four for Preston Nomads in the Sussex Premier League – he was amazed to discover just how disabled he was.

“I smashed it – miles in. They were all in shock with how well I’d hidden it,” he says. “I’d always looked at it [disability sport] as if I was fully able, watching the Paralympics in 2012 like everyone else, thinking those people were amazing.”

Following his assessment, he met up with Ian Salisbury – the former England, Surrey and Sussex leg-spinner who became disability cricket’s first full-time international coach in May 2017 – and the two immediately hit it off. “He really got me excited about playing disability sport, which I didn’t necessarily expect,” O’Brien says. 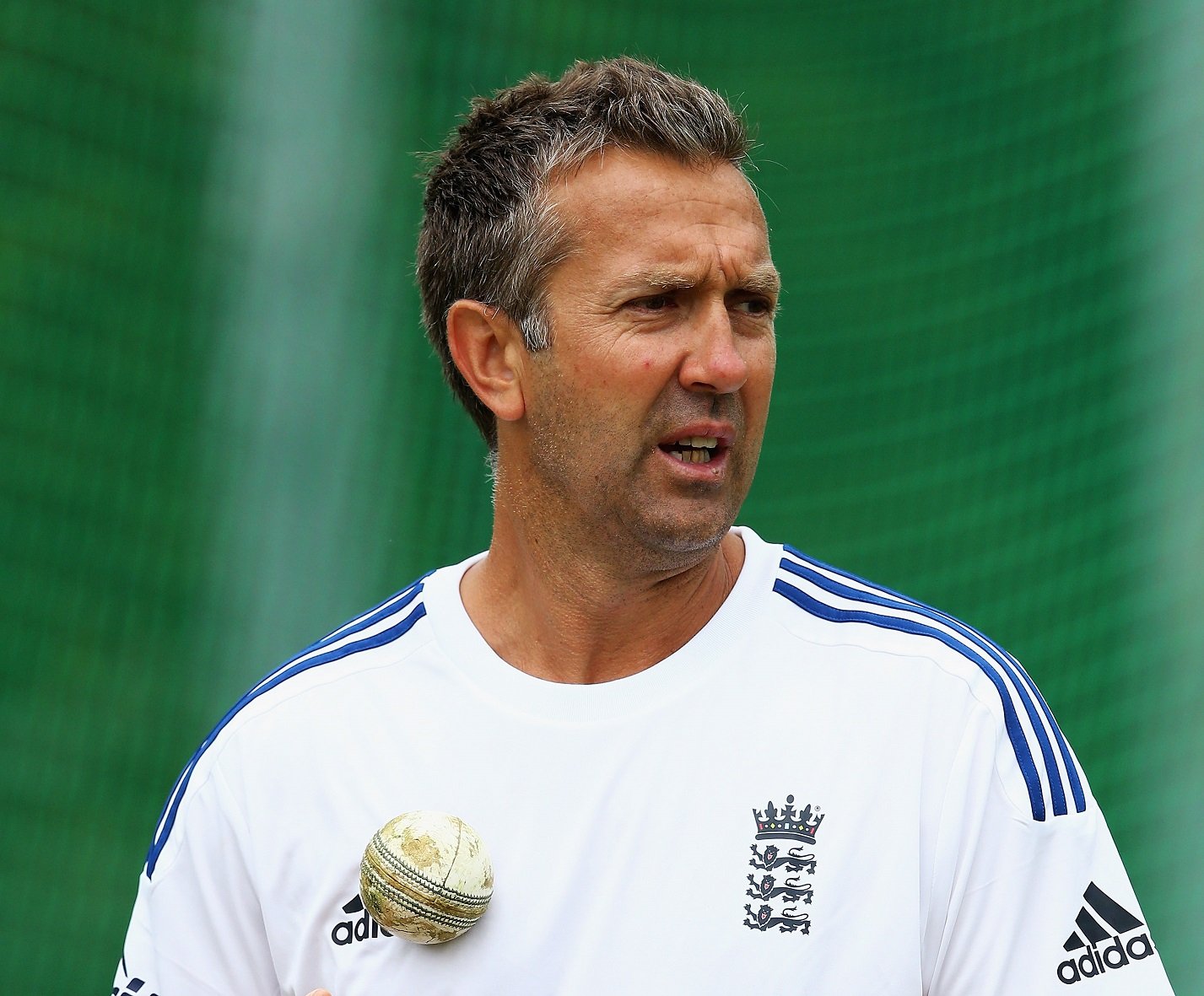 “I want us to be proud of who we are,” says Ian Salisbury

The challenge for O’Brien, Salisbury and Ian Martin, as he attempts to increase the profile of disability cricket generally – he’s just back from India with England’s visually impaired squad – lies in an acid test of their own next summer. Alongside the World Cup and the Ashes, England will also host the inaugural world physical disability championship. Pakistan will be the team to beat – understandably given their 16 full-time teams and a pool of 400-plus players.

There’s no soft-soaping to be had here. When he eventually walks or, as he jokes, “wheels away” from his job, Martin wants his boys to be as street-smart and tough as the best, a goal he feels might require a societal sea change. “I wouldn’t go so far as to say there is a mollycoddling culture – but there’s definitely an element of that,” he says.

“The biggest difference between us and the Pakistanis is that they are seriously hard – and I mean seriously hard – blokes, and we’ve developed a bit of a soft underbelly as a society. People with disabilities in our country can aspire to do great things – we’ve had a totally blind home secretary, for example – whereas in Pakistan, these guys are left on the street.” 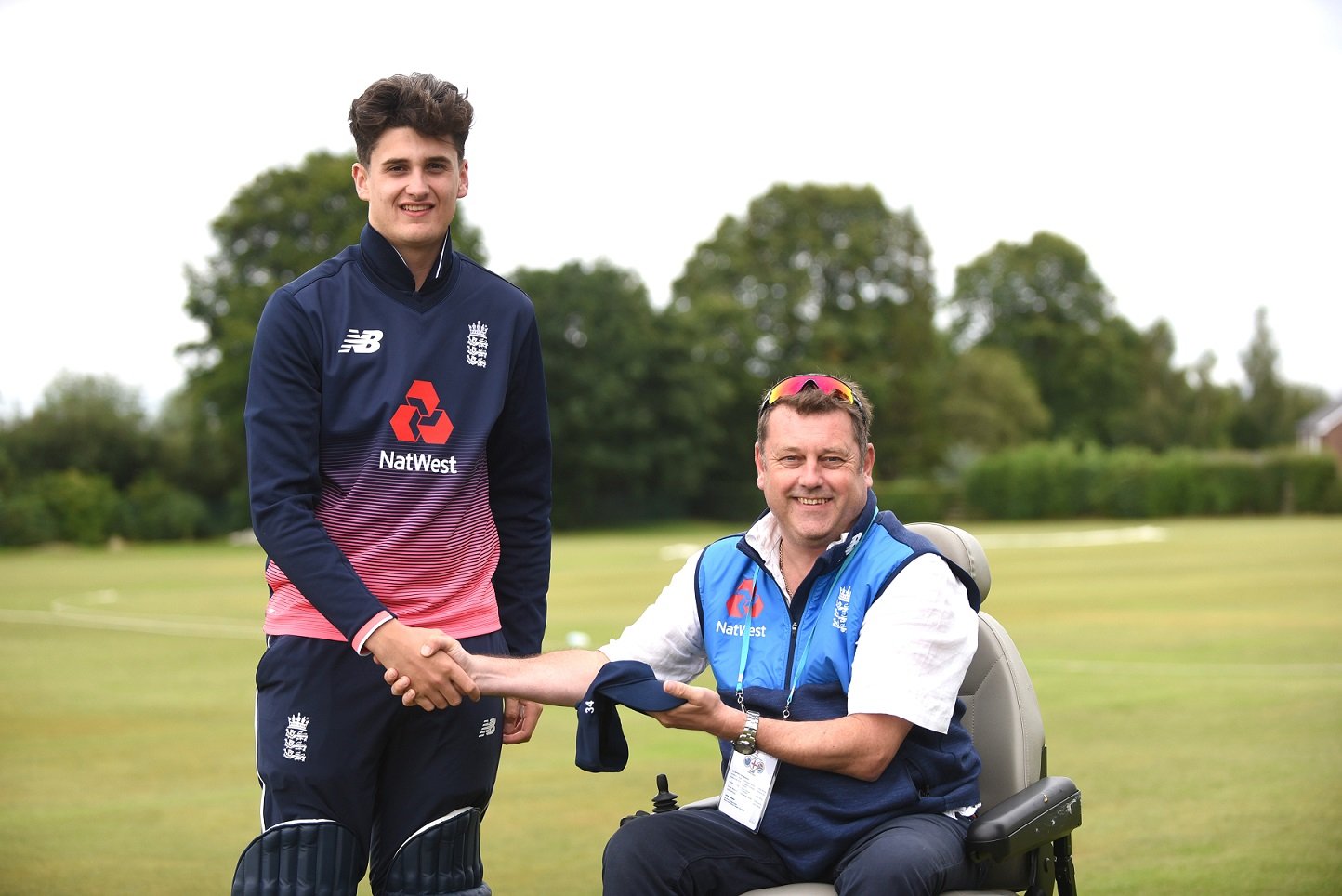 Despite ECB estimates that as many as 32,000 disabled people are playing disability or mainstream cricket, there is work to do. “Cricket is really open for business as a disability sport, for people with all types of disability,” Martin adds. “There is a misconception – or people just don’t think enough – about disabled people and their attributes. When you think ‘disability’, you think limitation and weakness. I’d say all disabled people have a degree of resilience – that might be at a higher level to what you’d find in mainstream society, because we have to. There’s always a battle to overcome, a hurdle to clear.”

In Liam O’Brien – photogenic, eloquent, focused and driven – Martin has found the perfect role model to help batter down those doors. “I think we’ve found a gem,” he says.

As a newcomer to disabled cricket, O’Brien was impressed by the quality – and difficulty of trying to read unorthodox bowlers offering batsmen few clues. “It’s harder than mainstream cricket,” he told his Preston Nomads mates, who subsequently dropped him to the twos after he was absent – “Yeah, but with England!” he laughs – for two weeks. 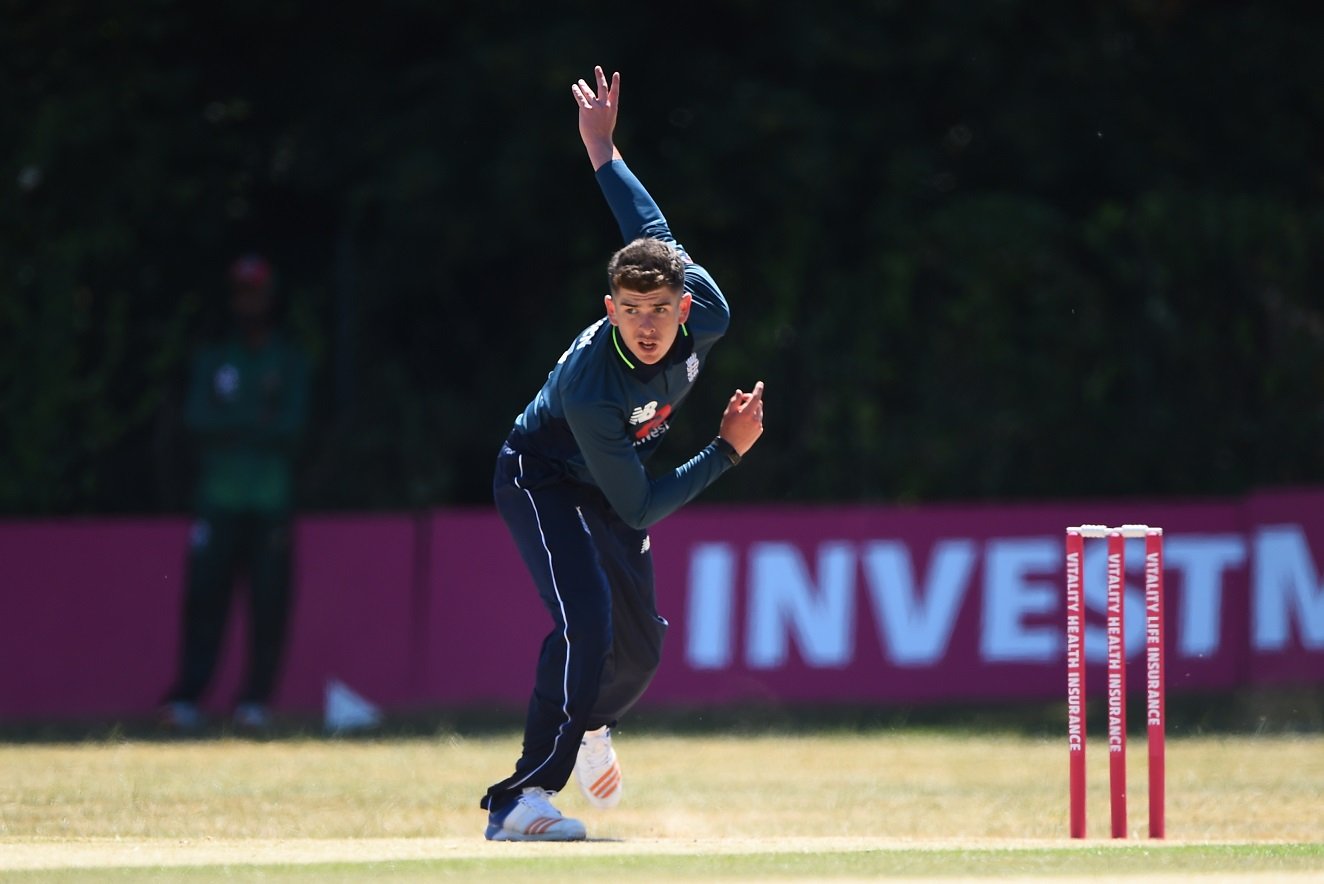 Tough love holds no fears for him. Five months since that international debut, his club teammates have yet to be totally convinced when he tells them that England – and certainly Pakistan – would give them a game. But he’s working on it. “There’s still a bit of a stigma around the level,” he says, “but they did apologise for dropping me. That Taverners award has certainly helped.”

It surely won’t be the last award he picks up. “Next year’s going to be massive – it’s our big platform to get PD cricket on the mainstream map,” he says. “You can read about in the paper, but that doesn’t put it into perspective – it’s just a disabled kid’s done well against disabled players. You’re missing a trick if you don’t see the things we are doing – seeing is believing.”

‘We’re starting to get acceptance and visibility’

England’s PD coach Ian Salisbury on pushing his players hard on and off the pitch:

“My first line was don’t hide the disability. I want us to be proud of who we are,” says Ian Salisbury. Eighteen months on, England’s PD coach knows that box has been ticked. “We travel in shorts and T-shirts now,” he says. “We’ve been in airports and people are wondering which side we are, but now when they see the false legs and arms, they’re going to know.”

Salisbury is a big believer in the holistic approach. “You’re always under pressure to win – that’s the nature of the game,” he says. “But I believe you should put as much effort into developing as you do into trying to win. I want to make better players and better people.”

He is excited about the challenge next summer for a youthful squad which, besides Liam O’Brien (who turns 20 in March), contains three teenagers, James Nordin, Luke Stoner-Lewis and Will Flynn. “We’ve just dipped our toes in the water,” he says of last summer’s inaugural PD tournament. “My aim was that everybody who saw us, or touched us in some way, was left inspired – and I think they were. We’re starting to get acceptance and visibility – people are seeing that it’s a credible project.”