Yorkshire cricket has been loud and proud these past couple weeks. Jonny Bairstow and Joe Root encapsulated this, leading the England batting charge on Yorkshire Day of all days. In recognition, let’s look back to Ian McMillan’s fond Yorkshire memories for The Nightwatchman.

It would have been the mid-1970s, I think, and I was watching Yorkshire play Leicestershire at Headingley. The game had been interrupted by harsh Leeds rain a few times, and me and the lads were sheltering and debating whether or not the bloke over there with the long hair was really Eric Clapton and, if so, should we be so uncool as to go over and ask for his autograph. Suddenly, as if a cheap hotel shower had broken, the rain stopped and the game began again and the guitar god was forgotten.

Nothing happened for a few overs; a man who looked like a half-inflated balloon stood up and shouted in a voice that was sandpapered and polished on the streets of Ossett: “Come on, Yorkshire: they onny mek shoes!” The rain began to assert itself again.

I almost wept as the stumps spiralled into the sky and my wife, her eyes moist, told me not to be so daft
Fast-forward, or run quickly between the wickets, to the late 2000s; I’m at Mad Geoff’s, the barbers in Darfield near Barnsley, the village I’ve always lived in. Geoff is giving me a trim or, as he calls it, a “glancing blow” and my six-year-old grandson Thomas has come along as an interested spectator. It’s raining outside and the talk has turned to cricket in general and Yorkshire cricket in particular. A man “wearing” a cardigan that, as Raymond Chandler almost said, had been taken from its mother too young, leans over to Thomas and says: “I bet you’ll be playing cricket for Yorkshire sometime soon.” Thomas doesn’t quite know what to say; he’s just started playing football for Brierley Cubs but he sometimes plays cricket with me in the garden. At this moment in the space/time continuum, he prefers being in the goals rather than the nets.

“Were he born in Yorkshire?” another man asks, and I nod. A hitherto silent man pipes up: “Tha’s not only got to have been born in Yorkshire to play for Yorkshire. My Uncle Keith said tha’s got to be born with a cricket stump up yer arse.” There is an appalled silence. Thomas laughs, then we all do. A man comes in and says: “What yer laughing at? Has Rotherham tumbled over into’t sea?”

Move forward again in time, slow as a Test match. It’s September 2015 and Thomas has become a cricketer; he still plays football, still helps the Cubs to win the league, but his real love is cricket, encouraged by his mum’s boyfriend Steve and endless idyllic hours in the back garden. He plays for Darfield and my summer has been a series of visits to beautiful village grounds in places like Monk Bretton and Upper Haugh. At Monk Bretton there was a bit of a mix-up and they went to Darfield and we went to Monk Bretton; it was a bit like a cricketing version of Waiting for Godot. At Upper Haugh he took a wicket and I almost wept as the stumps spiralled into the sky and my wife, her eyes moist, told me not to be so daft. 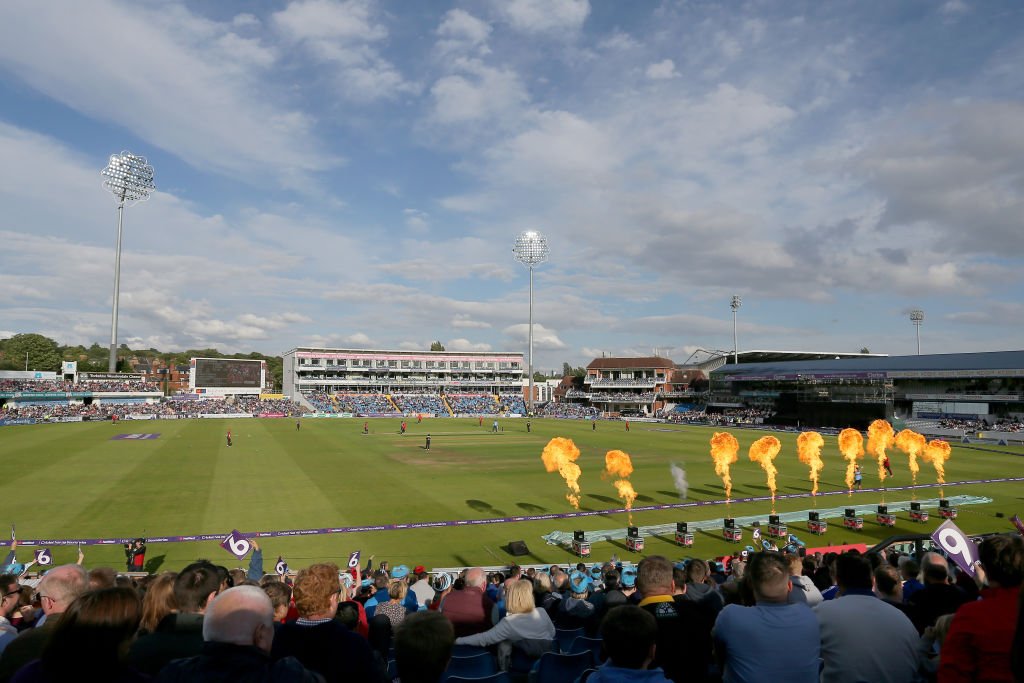 The spectacle at Headingley for a T20 fixture against Durham, a stark contrast to the scene set for County Championship action

We’d been to a few T20 matches at Headingley with Steve but I wanted to take him to at least one day of a four-day county match to experience, in my humble opinion, the game at its finest. It helped, of course, that Yorkshire were closing in on the title. It helped that the weather was good. It helped, crucially, that Thomas had an inset day from school.

So we got a lift into Barnsley and waited on platform 1 for the train to Leeds. We had sandwiches and we had a flask and some bottles of water. We had a Potter’s pork pie from Wombwell, one of the best in the land. We gazed up and down the platform and picked out the people who would be going to Headingley to watch the white rose bloom against Somerset. Who’s going on the pilgrimage with us? There’s that bloke in the flat cap; the couple with the flasks as big as The Shard; the lad and his dad, the lad in his cricket whites, hoping for a game. I planned in my head that at some point I would shout “Come on, Yorkshire; they only make cider!” 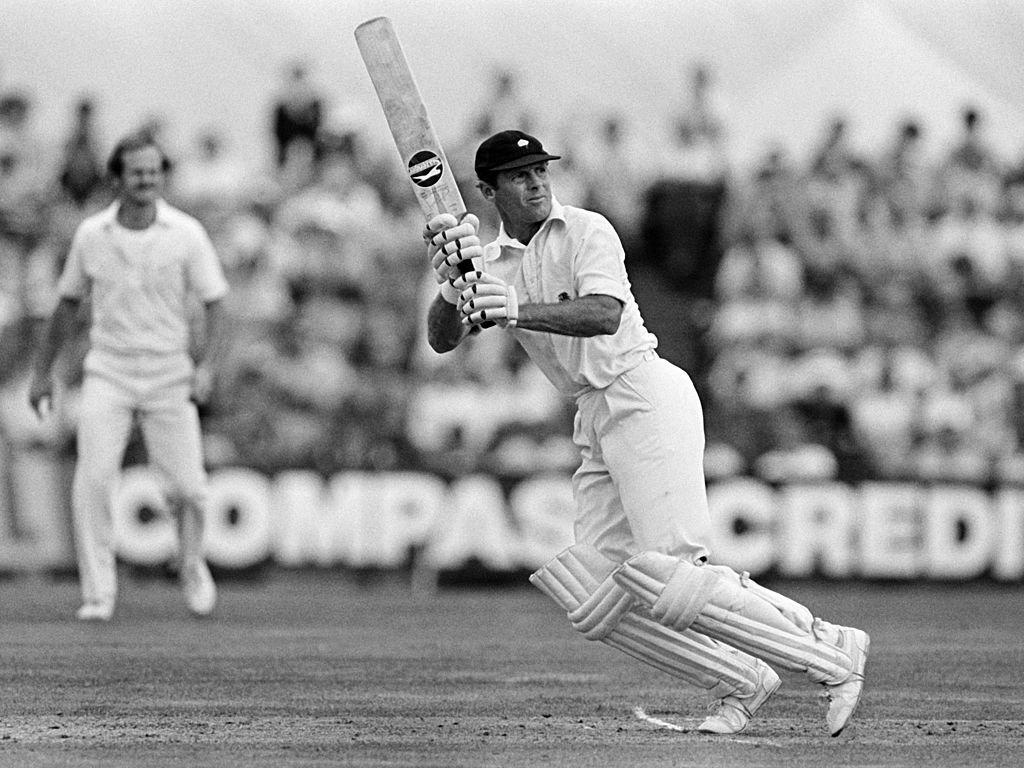 One of the first plays I ever wrote, with my mate Dave Harmer, was called Slow Bowler and it was about the 19th-century Yorkshire cricketer Ted Peate. He was born in Leeds in 1855, and although he began to play for a team called the Clown Cricketers, he ended up playing for Yorkshire and has been described as one of the best bowlers in the world at his peak, taking 8 for 5 in 1883 against Surrey. Sadly he came up against the haughty and insufferable old Etonian Lord Hawke who captained Yorkshire very successfully but was actually a Yellowbelly infiltrator from Lincolnshire.

He was very keen on the spiritual and mental life of his team, and Dave and I dug up and embellished (we’re writers, after all) a quote where he said, more or less, that the Yorkshire team of the time was himself and Ted Peate and nine other ale cans. The play went on as part of a double bill with Barry Hines’s Two Men From Derby, about a young footballer being signed for the First Division team. Both plays were, in a way, about class division, although our play didn’t have a set that included a ton of coal, as Barry’s did. Yorkshire these days is the revenge of the Players against the Gentlemen. Maybe I should write another play.

At Leeds we got off the train and followed the small but growing band of fans to the train for Burley Park; there was excitement in the air but it was a kind of muted, four-day excitement. A rumour began and spread like spilled tea, that Joe Root might be allowed out of England duties to play. It was rubbish, of course, and it would never happen, but we swilled the rumour around and some of us, like Thomas (and me, if I’m being honest: I’m naive), swallowed it whole.

Walking through the streets of Headingley towards the cricket ground is one of the great sporting pleasures; as a football supporter and a fan of the mighty Barnsley FC, I know that the moments before the game are often the best moments. But when you go to watch Yorkshire, the moments before the game are simply the moments when the orchestra tunes up and plays the overture before the real action begins. A trickle of us stroll past the terraced houses; a tousle-haired student gazes at us through a dusty window as though we are academics coming to tell him that he’s missing a learning experience, which of course in some ways we are.

Thomas and I sit with some men who could have been shaken from a box marked “Yorkshire Four-Day Cricket Fans”. The youngest of them is probably, like me, in his late fifties. They all, and I’m not kidding, have copies of the Yorkshire Post, which they flap open like Ordnance Survey maps. One has a sandwich box that seems to have one huge sandwich in it. Two are wearing straw trilbies. One is writing obsessively in a book with handwriting that looks like limping runes. They all seem to have the ability to glance up at the moment the ball is bowled and then back to their cryptic crossword or their sandwich or their rapidly filling notebook. 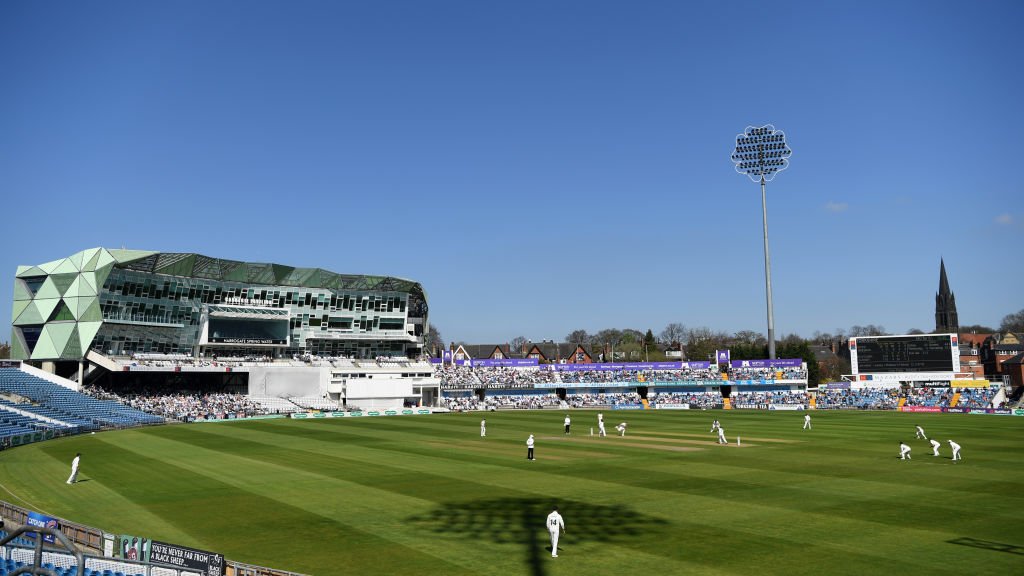 At this golden moment, I am as happy as I will ever be watching sport. I am with my grandson, who loves cricket as much as I do, and who now gives me even more reason to go and watch the game at Darfield. I am supporting a winning team who play with verve and poetry. I am sitting with my fellow Tykes who know much more about the game than I ever will. As a Somerset bowler begins his run-up, I say: “They could do with Ted Peate!” and I’m rewarded by a clutch of knowing chuckles.

This is Yorkshire Cricket Time here at Headingley; the past, the present and the future all co-exist. Lord Hawke is here, and Fred Trueman, and Joe Root and our Thomas. We’re all sitting together under a Yorkshire sky; a plane is making its slow run into Leeds-Bradford and I imagine the cricket-starved holidaymakers and honeymooners gazing through the tiny windows trying to catch a glimpse of the true field of dreams. I raise my hand to them; it’s okay, there’s no jetlag here. That’ll be a four. No, a six.

This article was first published in issue 13 of The Nightwatchman magazine, The Wisden Cricket Quarterly. The print edition, alongside other previous issues, is available to buy here.