The exact wording of Virat Kohli’s birthday message to Sachin Tendulkar has left the more eagle-eyed of fans wondering if the India captain might rate Sir Viv Richards over the Indian legend.

All three are undisputed greats of the game, especially in ODI cricket. All three were named an ODI Cricketer of the Decade by the Wisden Almanack, with Richards named for the 1970s, Tendulkar for the 1990s, and Kohli for the 2010s.

Richards averaged nearly 50 at a strike-rate over 90 in an era when sluggish run rates were the norm, Kohli has by far the highest average of any player with a significant number of runs, while Tendulkar holds the records for the most runs and centuries in the format, while also redefining the role of the opener.

The debate over which of the three is the greatest of all will surely rage on for years, but Kohli’s Twitter followers feel they know which way the current skipper leans. To celebrate Tendulkar’s birthday, he tweeted the right hander was “one of the greatest to have ever played the game and an inspiration to many”.

High praise, you might think. And yet on Richards’ birthday, Kohli went even higher. “Happy birthday to the greatest ever,” he tweeted. “The fearless king.”

Kohli has long demonstrated himself to be a fan of the Master Blaster’s work. In 2019, in a video interview between the pair, Kohli seemed practically in awe of the West Indies great. “There is no restriction on bouncers and then you go out and dominate like that. What did you feel from the time you left the changing room till you got to the pitch?” he asked. “What was the mindset?” 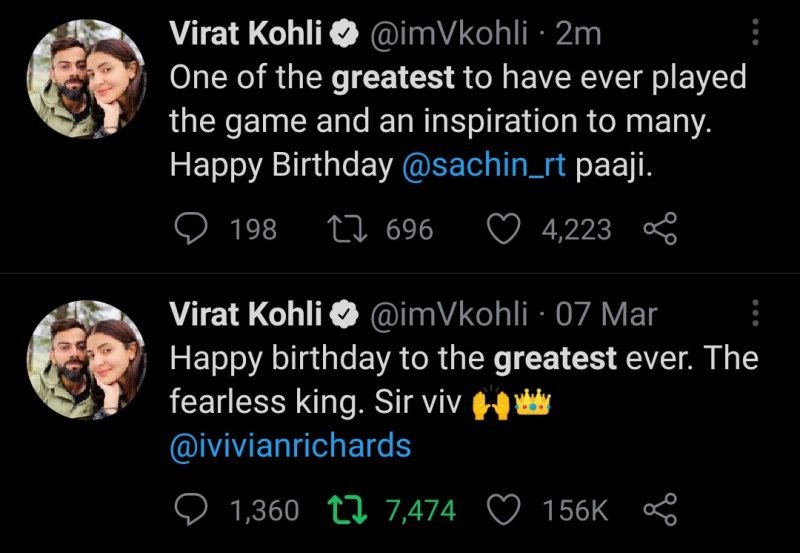 “I believed I am the man,” came Richards’ reply. “It may sound arrogant but I always felt that I was involved in a game that I knew. I would back myself every time.”

It seems Kohli believes Richards is the man as well, at least if you go by minute differences between his birthday tweets. In any case, the debate over who is truly the greatest of all time is sure to rage on for a while yet.