Kumar Sangakkara and Mahela Jayawardene, the two towering giants of Sri Lankan cricket look back at years of friendship that included a World Cup heartbreak, a world-record stand and a missed wedding.

So guys, when did the two of you first meet?

Open Account Offer. Up to £100 in Bet Credits for new customers at bet365.
Min deposit £5. Bet Credits available for use upon settlement of bets to value of qualifying deposit. Min odds, bet and payment method exclusions apply. Returns exclude Bet Credits stake. Time limits and T&Cs apply. The bonus code WISDEN can be used during registration, but does not change the offer amount in any way.

MJ: Yes, Kumar lived in Kandy and I lived in Colombo but we played against each other maybe once or twice when we were at school and then we hooked up when he came to Colombo and started playing club and international cricket together. That’s when our friendship began to build.

Any run-ins or rivalries between you in those early days?

MJ: No, not really! School cricket and club cricket was just a lot of fun.

When did you start to become close friends and see each other outside of cricket?

KS: I think when we started playing international cricket together. We were in a team that had a lot of senior players and we were the same age and had a lot of similar interests.

MJ: Yes, that’s a good point, because when I first came into the Sri Lanka side there was no one who was in my age group; Kumar was probably the first person of my age to come in after I made my debut in 1997. He came into the side in 2000 and as soon as he did we just clicked, because I needed somebody!

KS: It wasn’t an intimidating dressing room, in fact it was a lot of fun, and Murali always spent a lot of time with the younger players. But it’s great when you have someone who shares your interests and you have a lot of things you can do and talk about, on and off the field.

What were your first impressions of each other?

MJ: We have this joke in Sri Lanka about Kandy boys being a bit wild but Kumar was quite different. He was in his element in international cricket in the sense that he knows what he’s doing and he’s very focused and hard-working. Those were the first things I thought about him. Even when he first came into the side he was quick to learn, he was really working hard on his game and asking a lot of questions from the senior guys. Those are things we learned from each other as we tried to develop our game. Both of us helped each other quite a bit in that environment.

KS: When I came into the national side Mahela had already scored hundreds and a double hundred – 240 against India – and been the vice-captain so he was my age but at the same time he was established and one of the best performers. It used to frustrate me watching him bat because he never had to work hard like most of us; he had a lot of natural ability, grace and timing. He had the ability to score a lot of big runs at a young age, whereas I took about two years to get my first hundred in Test cricket. So there were a lot of things I learnt off Mahela: how he handled the dressing room, how he handled the seniors, the way he carried himself. It was great to be able to chitchat about that and then to cement the friendship by spending a lot of time together.

What are some of your best memories together over the years?

MJ: The best memories are our travelling adventures. Every time we go on tour we tend to feed off each other and both of us just love the game of cricket so we would ask questions of others and then just keep talking about how we could improve.

KS: It’s about enjoying the countries that we are in. We love to try out food, see the culture… have a good time basically.

MJ: It’s not easy when you’re travelling and playing the game for 15 years or more and you need that friendship to carry you through. You tend to make mistakes on the field and off the field sometimes and you need somebody to talk to and get their views to get it right. We’ve enjoyed that brilliantly. But we’ve also had our banter… we’re very competitive on and off the field! 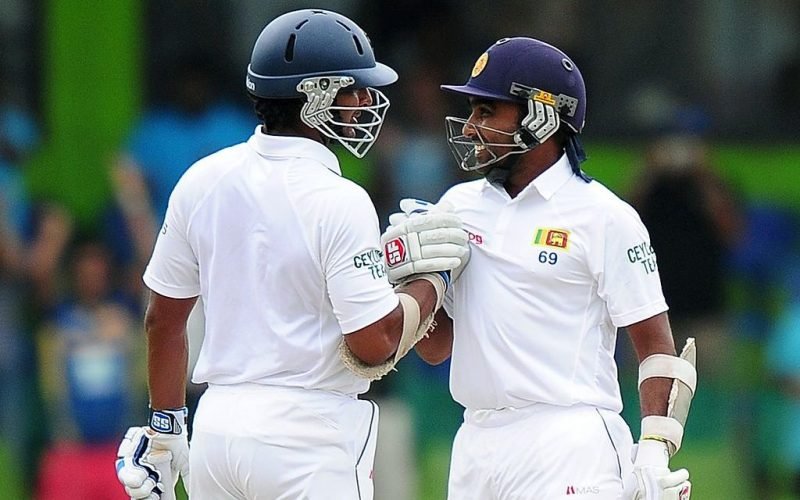 With 13,368 partnership runs at 47.74, Sangakkara and Jayawardene form the most prolific pair in international cricket

Do you ever argue?

MJ: Especially when we play our warm-up games, our football matches and various silly things.

KS: It makes enjoying the dressing room a lot easier when things get tough, when there are things you can’t control, that you have someone there who you can sit down with and have a laugh about it with.

Your most famous partnership is of course your 624-run stand against South Africa in 2006, which remains the highest ever partnership for any wicket in first-class cricket. How did you keep each other going through that?

KS: We were just having a good time, talking about a lot of things, including what we would be eating for dinner I think! The only time tension set in was when we got close to the world record. We were only aware of it for the last bit.

MJ: Yes, I think we had a tea break just before we reached the record and when we went back to the dressing room we had no idea how close we were. We knew that Sanath [Jayasuriya] and Roshan [Mahanama] held the record but we weren’t sure how close we were to it until the tea break when someone said we were 10 or 11 runs away from breaking the record. I was particularly nervous because it’s not an individual thing and you can’t let your partner down. Those last few runs were very tense!

KS: It’s nice that two good friends hold that record. I don’t think we ever set out to break it, it just happened.

MJ: I think the match situation dictated the partnership purely because when we went in we were in trouble so we were not actually thinking about a big partnership, we were just trying to get through that period against a good South African bowling attack. We were about 14-2 when I joined Kumar and we were just trying to bat through long periods, we never had a thought of a big partnership like that. But I think that’s how these things happen – you don’t really think about it.

Having won the toss and elected to bat, South Africa posted what looked a well below-par 169 but the tourists were given a glimmer of hope when Dale Steyn removed both Sri Lankan openers inside four overs. What followed was the highest partnership first-class cricket had ever seen – a record that still stands today.

Sangakkara began shakily, as he was put down in the gully and bowled by a no ball. From then on there was no let up though; he and his partner Jayawardene each reaching their half-century before stumps on day one and batting through the entirety of the second day to bring up their double tons.

That evening, with history beckoning, the friends tried to relax and took their wives out to dinner at a local Thai restaurant. Then, on day three, they ploughed on, first passing Sanath Jayasuriya and Roshan Mahanama’s record of 576 for the highest Test partnership and then Vijay Hazare and Gul Mohamed’s first-class record of 577. Each landmark was greeted with an impromptu blast of fireworks.

Sanga eventually fell for 287, after 675 minutes at the crease, but his partner continued to churn out the runs, eclipsing Jayasuriya’s innings of 340, the highest by a Sri Lankan, before finally falling 26 runs short of Brian Lara’s Test record 400 to the dismay of the home fans. In 752 minutes at the crease, Jayawardene had faced 572 balls and hit 43 fours and one six. He declared immediately after his dismissal, giving Murali enough time to bowl out South Africa for an innings victory.

Is it true that you were best men at each other’s wedding?

KS: Not quite, no. Mahela’s wife was maid of honour at my wedding.

MJ: And Kumar was meant to be the best man at my wedding but he wasn’t in the country! The wedding was fixed for a date but then a tour got rescheduled and got tangled up in the week of my wedding. I had to fly back from India for my wedding and none of my teammates could be there.

KS: It was a real shame. I was in India playing a one-day series. Mahela had to skip back to Sri Lanka for a couple of days.

MJ: I only missed one game because they forced me to come back after the wedding!

But you’ve also had your tough times together too?

MJ: But we’ve stuck together and we’ve helped each other out in those situations. We’ve had conversations about how to get through those tough times. It makes a big difference having Kumar there. It’s not about saying ‘yes’ to everything, it’s about asking each other questions about why we’re doing something and asking if we can maybe do something differently. Having a different opinion can help each other. Playing in Sri Lanka is not always the easiest place, with lots of things happening, so often you need that bit of advice.

You two have been such a huge part of Sri Lankan cricket for so many years. Do you see it as your duty to lay the foundations for the future of the national side?

We want to see new players coming through, breaking our records and going further forward

KS: I think that’s any player’s responsibility really, to leave cricket a better place and to leave the dressing room an easier place to come through; to set foundations and guide with advice. But at the end of the day I think our responsibility is very simple: to play Test cricket to the best of our ability so we can inspire young players to reach those standards. Mahela has got close to 11,000 Test runs, over 11,000 one-day runs, over 30 hundreds. What better way to inspire the next generation than to do what’s he’s done? To play the game in such a manner, to win games for Sri Lanka, to leave that legacy.

MJ: There have been a lot of foundations laid by a lot of Sri Lankan cricketers over the years and our challenge was to take Sri Lankan cricket forward from where it was. We are a tiny island and what we’ve accomplished is amazing and we’re passionate about our game and very proud we’re playing for our country. We want to see new players coming through, breaking our records and going further forward, because that means we’ll have done a good job in giving them a pathway.

And when you do both retire, the partnership continues?

KS: Of course. We’ve already started a couple ventures together.

MJ: Most of the things we’ve started are together, in charity work and other business ventures, so we’ll definitely be partners for quite some time I think! It’s been fun and it’s a fantastic friendship we have on and off the field. It’s not overshadowing each other. It’s a very healthy partnership; we feed off each other and we complement each other.