Pakistan’s chief selector and head coach has been protecting his country’s cricket for a decade and more. He talks to Taha Hashim about his extraordinary journey, and the revelatory developments that have resulted in Test cricket’s return to Pakistani soil.

A decade on, the scene still jars. Giles Clarke, then chairman of the ECB, hands over a medal and cheque. His face is cold. No words spoken but everything said. The boy takes his prizes but doesn’t dare lift his gaze. He retreats to the corner with his head bowed, using his Pakistan cap as a shield. The sliders aren’t appropriate footwear for the Long Room, but more serious misdemeanours have taken place. The soundtrack is of hesitant applause because everyone present is entrenched in their own inner conflicts. How do we celebrate this fraud?

The News of the World story is out, and Mohammad Amir’s innocence has been obliterated. There are no teammates around, and why would there be? The man who has led him this way, the same man who hawkishly watched him and not the batsman at the fateful moment, is like an elder brother. But he’s more than that. Salman Butt is Pakistan’s captain. The ultimate betrayal.

“The Pakistan Cricket Board just called me and told me: ‘We are going to make you captain.’”

Far away from the crime is Misbah-ul-Haq, 36, and planning his international retirement. He’s lost his place in Pakistan’s Test side a few months earlier and the end looks nigh. If it’s to end here it’ll be with 19 Tests – spread over the course of nine years – and an average of 33.60. Take away his two Test centuries and there’s still 30 left over from domestic first-class cricket. A technique honed through playing tape-ball cricket as a boy in Mianwali has barely seen the light of day where it really matters. Pakistani cricket, in perpetual chaos, has failed to make much use of the leadership qualities of an MBA graduate. His moment in history will be the failed paddle-sweep that handed India the inaugural World T20 and brought about the IPL revolution. And then the phone rings.

“The Pakistan Cricket Board just called me and told me: ‘We are going to make you captain.’ I was nervous. I hadn’t proved myself at that level in international cricket. I’d been in and out of the team. Captaincy wasn’t a big issue – first I had to prove myself as a player too. Those were the worries, but then I just thought: ‘This is an opportunity. Why don’t I just take it and give it my best shot?’” It doesn’t take long for Misbah to prove himself, to himself. In his first Test as captain, at Dubai against South Africa in November 2010, he puts on 186 with Younis Khan to save the match. “That really helped me.”

It’s just the beginning. Misbah moulds a side that respects the virtues of pragmatism. Forget volatile fast bowlers that collect more suspensions than wickets; spin’s the way to go on the barren tracks of the UAE where Pakistan have been forced to set up camp. Saeed Ajmal is his first great weapon, and then it’s Yasir Shah’s leggies. Alongside Misbah, impregnable reliability is found through the batsmanship of Younis, Azhar Ali and Asad Shafiq. England, the world’s No.1-ranked side, are whitewashed at the start of 2012 and two years later Australia are defeated 2-0, with Misbah breaking ranks from his ‘Tuk-Tuk’ tag to hit what was then the joint-fastest Test hundred of all time. 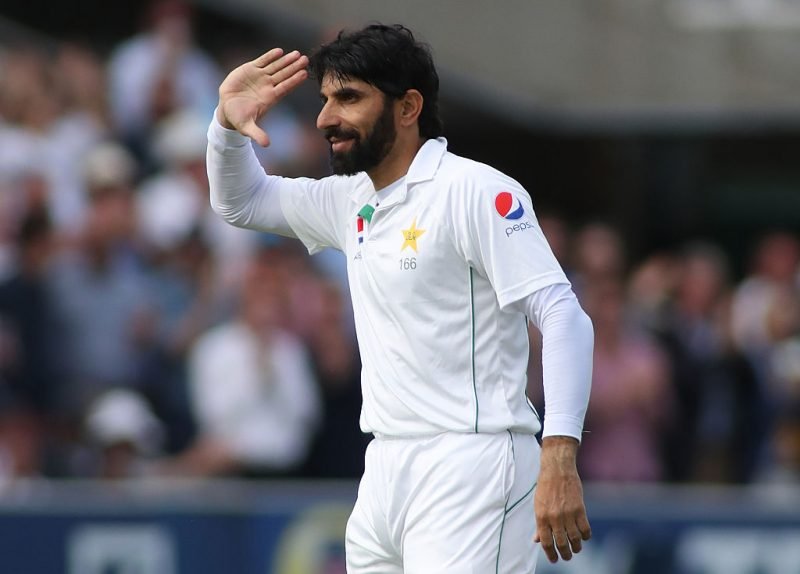 Misbah celebrates reaching his century at Lord’s in 2016

The pinnacle is 2016. Pakistan return to England and Lord’s. Amir is back, his ban served, the locks gone and the boy a man. Misbah puts his name on the Honours Board, salutes his comrades and, of course, it’s Amir that takes the wicket to finish it. “The proudest moment, I always say, is the Lord’s Test in 2016 – scoring a century and winning the Test match. That was something special for us. From what happened to us in 2010, just regaining that dignity, the confidence, the support of our fans and performing like that – that was a massive thing for me.”

Eight days on from victory at The Oval in the final Test of the series, Pakistan go top of the Test rankings. They finish the tour with a lap of honour, walking in unison, no man left in the corner hanging his head in shame. Misbah-ul-Haq isn’t just Pakistan’s captain. He’s their greatest ever.

First off, I’m sorry,” Misbah tells WCM. “You’ve been chasing me for a long time. So many things have been going on here.” It’s more than understandable; as Pakistan’s chief selector and head coach, he’s a busy man. Two years on from his international retirement – his final Test coming in the month he turned 43 – the announcement of Misbah’s return last September came at another time of need. “I was returning to pretty much the same set-up from when I retired in 2017. The only thing that was noticeable was that in 2017 our team was cruising in all formats.”

Of the 28 completed matches Pakistan played in 2019 prior to Misbah’s appointment, they won eight and lost 20. Cue a move from the PCB to throw unprecedented power at the man who bailed them out as captain. Being a chief selector requires extensive knowledge of the domestic game. Being a head coach involves a lot of passport stamps. This is not how things are usually done.

“When they shared that idea with me of taking both roles I was a bit worried too. You have to face a lot of pressure and criticism. You cannot blame anyone else. You have to be held accountable. But at least you have all the power in your hands, and wherever you want to go as a team you can go there.” Help as a selector arrives from the head coaches of the six provincial teams who relay feedback to the chief. “In every game played there are two selectors, each for one team. That helps us not to miss anything: any performance, any attitude, any indiscipline.”

The early months were difficult, reflected by a 3-0 T20I series defeat to a second-string Sri Lanka side, the sacking of Sarfaraz Ahmed as captain – “Sarfaraz’s form was the reason he couldn’t make it into the side” – and a humiliating tour of Australia. So the next assignment, a two-Test series against Sri Lanka on genuine home soil came at the perfect time. Test cricket was to return to Pakistan for the first time since March 2009, when terrorists had attacked the team bus of the visiting Sri Lankans.

The series result was never going to be the main story. “It was emotional,” says Misbah – who captained Pakistan in his home country just once, in an ODI against India in 2008. “Playing in the UAE, far away from your own country, it was like an away tour. Players felt homesick for a home series. You’d just stay there for three, four months and you’d miss your families. Thankfully, cricket is back in Pakistan now and we can play more of our home series here. It’s good for our youth. Once international cricket is being played on your own soil it motivates people, helps to develop infrastructure and young players, too. I think that is something we have missed for the last 10-11 years.”

And what of his own time as Test captain, when the opportunity never came to play under the gaze of the nation? “I missed that, but whatever I did, wherever I captained Pakistan, I really enjoyed it. Obviously you feel that it could have been a lot better if I could have played and captained my team in front of a Pakistani crowd. But this is how life goes.”

Results may have been secondary in the recent series against Sri Lanka but they were significant nonetheless, with a 263-run win in the second Test at Karachi built on second-innings hundreds from all of the top four, and five-fors from teenagers Shaheen Afridi and Naseem Shah. Yet the victory had barely sunk in before news broke that Bangladesh were trying to back out of their two-Test tour in January. A deal was eventually struck for the tour to be split into multiple legs, but not before Misbah had his say. “I said in a press conference that it would be an injustice to the Pakistan team. You cannot deprive such a team that was No.1 in 2016 and won the Champions Trophy in 2017 – and a huge, huge fan base. People love cricket here in Pakistan and no matter who comes here, they come in huge numbers to see cricket live.”

They weren’t deprived. An innings victory in the first Test at Rawalpindi came inside four days, and at the centre of it was the poetic Babar Azam, who struck his fourth Test century in seven innings. “At the moment he’s one of the top batsmen in the world in all three formats,” says Misbah of the 25-year-old. “He has now registered himself right at the top with Kane Williamson, Steve Smith, Virat Kohli and Joe Root.”

Already Pakistan’s T20I captain, and reportedly set to take the reins in 50-over cricket, Babar is the future. And as the observant statesman gazing down from the dressing room, Misbah is too. It’s intriguing to reflect in hindsight on an interview Misbah gave The Cricket Monthly five years ago, in which he proclaimed: “The PCB has asked me to help them after retirement a few times… Here I am thinking: ‘The only reason I am leaving cricket is to be rid of dealing with you guys. Why would I want to work with you?’”

That attitude has shifted and the answer as to why is quite clear. It’s the reason he played in last year’s Pakistan Super League at the age of 44. It’s why he still practises at home when he finds himself hankering for the feel of bat on ball. “The passion I have for the game, once you have that, you feel attached. That got me back into the game.”

Wounded Tiger, Peter Oborne’s extensive history of cricket in Pakistan, has one part titled ‘The age of Kardar’ and another ‘The age of Khan’. A decade on, the age of Misbah remains in its infancy.