From entering the Test arena at just 20 years-old to playing county cricket across the other side of the world at Somerset, Matt Renshaw has already achieved an impressive amount so far in his young career, and was recently named in the top 10 of Wisden Cricket Monthly‘s best young players in the world. Adam Collins caught up with one of Australia’s brightest young talents on his experience at Taunton, his major influences and what it was like to play Test cricket at such a young age.

Most players would jump on the next plane. When Matt Renshaw broke a finger against Surrey in June that was the expectation, given he was at the fag-end of his highly productive Somerset stint. But who were his fellas playing next? The team with the player who has more runs to his name than any other England batsman. Like Renshaw, Alastair Cook is lean left-hander who made his international bow at 20. So he decided to travel with the team to Chelmsford to watch him bat, hoping to grab him for a chat and a beer as well.

The Queenslander only had his thigh pad and box on him while on a European jaunt when the phone rang with Taunton on the line. When Renshaw lost his spot in the Test side to Bancroft before the Ashes, he thought his chance of joining the county circuit this season had gone with it. But with Cameron Bancroft’s contract torn up before arrival following the ball-tampering fiasco, he knew there was a decent chance of a call. He wasn’t going to waste this opportunity.

County cricket agreed with Renshaw to such an extent – his six-game stretch included three centuries; one on debut then another from 86 deliveries before lunch on day one against Yorkshire – that he now wants to follow another antipodean southpaw, Chris Rogers, as a regular fixture in the shires. WCM sat down with Renshaw in the stands at Chelmsford as Cook ticked past 50.

What have you learned playing in early-season English conditions, especially thinking ahead to the Ashes next year?

In Test cricket you don’t have the same type of bowlers who seem to take lots wickets on English seaming tracks. But facing Jimmy Anderson at Old Trafford was a challenge, just seeing where I am at compared to him. It might have been a flat wicket but it was still challenging with a swinging ball. 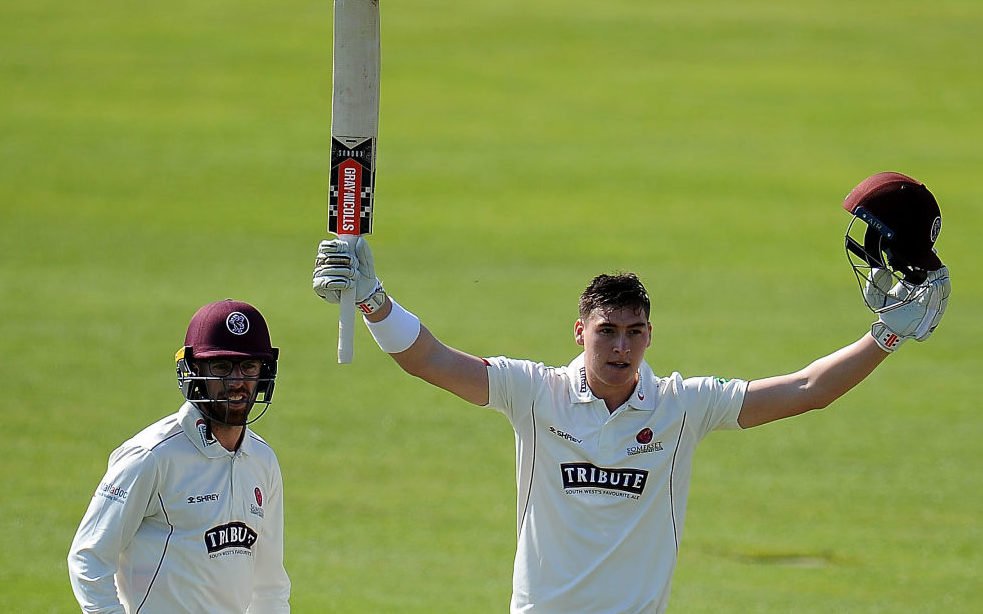 Renshaw impressed during his spell with Somerset earlier this summer

Did Anderson give you any chat?

He let me know that I’d been dropped for Bancroft and I thanked him because I think I’d forgotten at that point. It was all good fun.

Greg Chappell played for Somerset at a similar age to you and said the experience was vital in improving his game. You’ve had a fair bit to do with him?

Less now that he is a selector but he was very involved at the national academy when I was there. I remember how simple he made batting sound; for instance, that you should be able to hit any full toss over mid-wicket or cover. The way he talks about it you can tell he was on another level.

Your dad Ian [a cricket coach who taught sports psychology at Sheffield Hallam University] has clearly been a strong influence on your career. Is he a big reason behind the fact you’ve progressed so quickly?

I think so, but I never went into a session with him and thought, ‘This is going to make me a Test cricketer at 20’. I played a lot of men’s cricket when I was young and that helped. I was quite small and didn’t have my growth spurt till I was 16. I remember batting in a sixth-grade match where I was 33 not out at stumps.

What sort of exercises did your dad put you through?

For practising the short ball he hit the ball at me using a tennis racquet and if I hit any of the nets on the full I was out. We also had a game about knowing where your off-stump is. If you played a shot between off stump and fifth stump you’d lose a point, and if you let one go through there you’d gain a point.

On debut against South Africa you made 37 not out from 137 balls, playing and missing a fair bit in the fourth innings. The crowd started booing but Chris Rogers was impressed because you played the line rather than following the moving ball. Is that linked to those off-stump drills?

It was. South Africa had a strong attack and with those chases of 140-150 if you lose a few wickets you start panicking. Everyone was fine with it in the dressing room, it just seemed boring for some of the crowd – who the week before were saying we needed to have more value on our wicket! I was thinking, ‘What if I hit Rabada back over his head?’. But I knew that was stupid. When I got the hundred in that Shield game [to get selected for the Test team] I must have played and missed about 40 times to Chadd Sayers on a Gabba wicket where you play the line and play and miss. But if you chase it that’s how you’re going to get out. 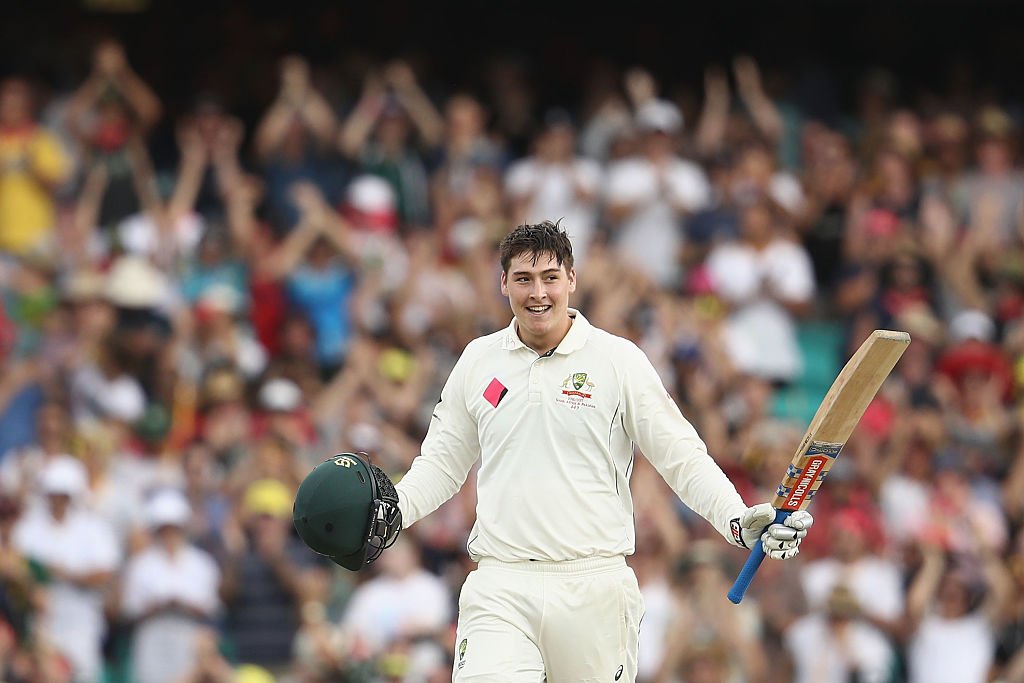 Do you have a routine to preserve energy when batting for long periods?

If you’re going to bat all day it is mentally draining and you have to switch off. So between balls I sing whatever I have in my head. That song during my Shield hundred in Melbourne was Redbone by Childish Gambino. And I always make a groove with my back foot using my spikes, and as I go back onto the pitch I’ll put my foot exactly in that spot and that’s the ‘on’ switch.

You’ve been pigeonholed as a grafter but during your stint with Somerset you made a century before lunch on a green top. Can you make the Australian limited-overs teams as well?

I think so. After getting dropped [from the Test team] my stint with the Brisbane Heat was important. It helped me develop a few shots and change my mindset. If I went to hit every ball for six in a Queensland Bulls net session it would be like, ‘Get out of the net, Renners, you’re not taking this seriously’. Before I got dropped I wasn’t looking to score and I was getting into a rut. Now I feel as though I’m putting the pressure back on the bowlers. Going into the BBL [Big Bash League] set-up, I was able to relax and be free.

Things happen for a reason. Getting dropped has made me a stronger cricketer and person

Was that defensive mindset a result of how you were expected to play on the Test tours of India and Bangladesh last year, when you were holding on for as long as you could?

Yeah, and the added pressure of being a Test player. I got that mixed up and started batting without any intent. I got a message from Greg Chappell and I also had a text from David Warner saying it didn’t look like I was trying to score. My defence was okay but I wasn’t going away from that and it was getting me into playing half-aggressive shots.

Very few people make their Test debut at 20, are dropped at 21 and recalled by 22. Do you now feel you’re in a good place to capitalise on your second chance?

Cricket is massively about timing. Look at the way I got picked originally: coming back from injury I got a hundred and was in the Test side a week later. Things happen for a reason. Getting dropped has made me a stronger cricketer and person. Talking to Justin Langer, he said every player who has debuted before 23 has been dropped, including Ricky Ponting and Langer. I take that as a positive and keep learning as much as I can.

As we wrap up our chat, Cook is given out lbw four runs short of what would have been his 62nd first-class century. Later, he had that beer with Renshaw.

To find out where Renshaw places in our list of the 50 best young men’s players on the planet, pick up a copy of issue 10 of Wisden Cricket Monthly