For the first time since 2015, the great stylist Usman Khawaja is no longer part of Australia’s inner sanctum. In the fourth issue of the Pinch Hitter, he talks to Adam Burnett about leadership, ‘laziness’, and how his faith inoculates him from negativity.

In his home in Brisbane, Usman Khawaja is up 30 minutes before the sun, readying himself for the first prayer of the day. He has been confronted with some significant unknowns lately, both professionally and personally: for the only time since 2015, he is not on Cricket Australia’s central contract list; and in July, his wife, Rachel, is due to give birth to their first child. Beyond his own four walls, the Covid-19 crisis has added another layer to the pervading sense of uncertainty.

All of which means the 30 days of Ramadan has arrived at a good time. Khawaja looks forward to the traditional Islam period of fasting and prayer. It provides an annual anchor for him, an opportunity to check back in with himself, to re-centre and recalibrate.

“It’s the month where you always get closest to God,” he tells the Pinch Hitter. “It’s almost like a detox, every single time, and it’s a great discipline thing – I really enjoy it.”

Khawaja knows plenty about discipline, and he has seen how it can cut both ways; while it has been fundamental to his success as a cricketer, it has also been a weapon wielded against him. Right now, he is taking comfort in its warm familiarity as he sets himself for the dual challenges he knows the coming months will bring.

Usman Khawaja had been in Australia’s Test side more or less permanently in the two-and-a-half years preceding the Cape Town scandal, his only omissions coming through injury and the final match of a disastrous tour of Sri Lanka in 2016. Only Steve Smith and David Warner had scored more runs through that time. 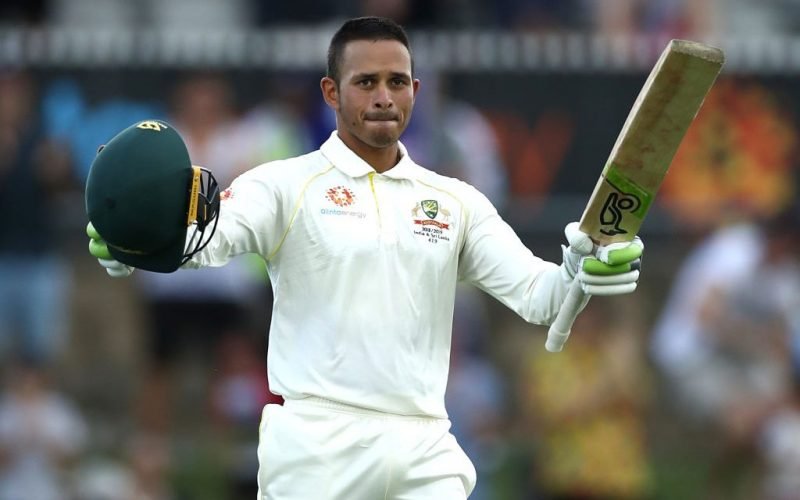 Almost six months after Cape Town, as Australia prepared to embark on their first Test campaign since, new coach Justin Langer and the national selection panel were busy devising their revised approach to the team’s leadership. Khawaja, the team’s most experienced batsman and the captain of Sheffield Shield champions Queensland, was mentioned among a host of other names as a candidate for the vice-captaincy under Tim Paine, who had taken the top job in South Africa.

Ultimately, Langer and co. – with input from the playing squad – opted for a couple of surprise names as deputies for that two-Test series in the UAE: fast bowler Josh Hazlewood, and all-rounder Mitch Marsh.

At the time, Khawaja kept his head down. He had stripped seven kilos and peeled off three consecutive hundreds in the County Championship for Glamorgan, and the challenge of proving himself on the turning wickets of Asia was driving him.

“It was a bit surprising to me that, as a player who had been in the side consistently for the last three or four years, and being a big part of the team and captaining Queensland and Australia A teams, I wasn’t given that [leadership] position – I found that very odd,” he says now. 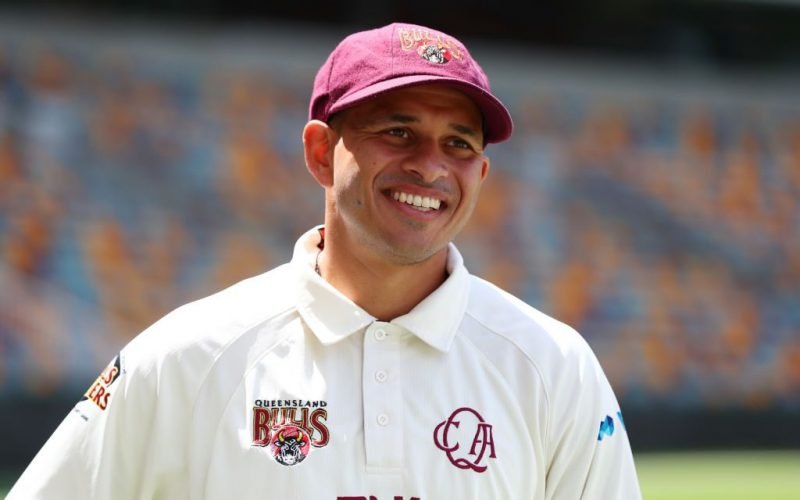 “I got over that pretty quickly because I knew the best thing for me moving forward was scoring runs to help the team win, and you don’t need a tag next to your team to do that.”

Khawaja played the innings of his career to save the first Test in Dubai on the final day – a near nine-hour marathon that silenced his critics. His match double of 85 and 141 was a long time in the making.

“Growing up I was called ‘lazy’, and I definitely wasn’t as good a player of spin when I was 24 as when I was 30,” he says. “That was six years of hard work – day in, day out – to get to that point. People never see that stuff. They just saw the end result in Dubai.”

“I’m still very motivated to play for Australia, but by the same token I’m just going to control what I can control”

During the home summer that followed, he went five Tests without a hundred, before crashing a rollicking century against an under-strength Sri Lanka. It remains the most recent Test hundred he has scored; later in 2019, he was jettisoned for the fourth Ashes Test to accommodate the return of Smith, who had missed the prior match with concussion.

Only a month earlier, Langer had praised Khawaja for his calmness in high-stakes matches, even comparing him to Mark Waugh. Suddenly though, despite numerous failures among Australia’s top order, he was out of favour. And it has stayed that way since. 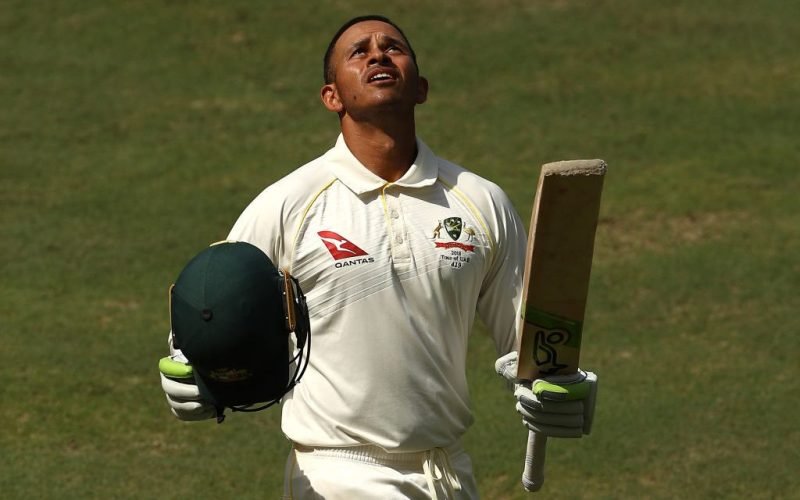 Khawaja will be 34 in December and it is five years since he has spent this long outside the Australia set-up. He still believes he is one of his country’s best six batsmen, and would love to return ahead of the upcoming Test showdowns with India – with a subcontinental tour in early 2021 potentially a generation-defining one for Paine’s side.

“Absolutely I’d love to be part of something like [the India tour] … I’m still very motivated to play for Australia, but by the same token I’m just going to control what I can control, and that’s training hard, trying to become better,” he says.

“’Punter’ [Ricky Ponting] once said something to me that has always stuck with me. This was probably seven years ago, we were talking about the fact I’d just been dropped, and he said to me, ‘Uzzy, the harder I tried, the worse it got’.

“I’ve always kept that in the back of my mind because it rings true for me too. So [when cricket returns] I’m not going to go out there trying any harder than I would any other time.

“And no matter what happens in life, I’m grateful for everything I’ve had. I’ve got nothing to prove to anyone.”

The gratitude stems back to his religion, and specifically Ramadan, which Khawaja says reminds him every year how fortunate he is to be able to enjoy life’s most basic elements – food and water among them. He knows there are many millions for whom such items are not so accessible.

It took him years to feel comfortable speaking openly about his religion. Initially he was a reluctant role model for both the Muslim and subcontinental communities in Australia but that has evolved to the point that last year he launched the Usman Khawaja Foundation, which looks to assist “youth from refugee, immigrant, Indigenous, rural, remote and low-socio economic backgrounds”.

“The older I got, the more I played and the more people from the subcontinent community [would] say, ‘Uzzy, I love what you’re doing… we just couldn’t relate to Australia [as a cricket team], and now that you’re playing for them, we’re supporting them’,” he says.

“I’m not going to sugarcoat it – I came to Australia and lived in western Sydney in the 1990s. That wasn’t an easy place to live as a Pakistani. I copped a fair bit of shit.

“I had a few instances where I dealt with people who weren’t very nice to me racially, and then I had a lot of people from the subcontinent community telling me I wouldn’t make it in Australia because of the racism that is embedded in the cricket culture.

“They’d say, ‘Look around – who do you see playing cricket?’ It actually drove me more, to be honest.

“Being a role model now …. I think it’s great. People like Gurinder Sandhu, Jason Sangha’s coming up, Arjun Nair at the Thunder – these guys are doing their thing and showing not just the subcontinent community but communities from all across the world living in Australia that if you do the hard work, you can make it.

“That’s probably one of the things I’m most proud about in my cricketing career.”

Khawaja identifies with Islam in part because its teachings encourage him to pursue his natural inquisitiveness. Instead of steering him away from science – where he has found fascination and education in physics and aviation, and evolution and nature – it has told him to go there; satisfy your curiosity, seek the knowledge you crave, and have a more rounded view of the world because of it.

“People always find it weird that I’m religious and I love science,” he says. “But I actually think the two go hand in hand.”

There will perhaps be no finer example of that next month, when he experiences the miracle of birth. With that, he knows, the balance of his life will tilt; he is conscious of the selfishness that accompanies the lives of elite sportspeople, and knows Rachel will need him more than ever.

“There is going to be a little bit of a shift from my side, but thankfully at the moment we’re not travelling overseas, so I’ll be here… it’s probably the best time it could’ve happened,” he says.

“I’ll be around supporting her – I think it’s my time to give a bit back. But even in saying that I think she understands here will be times where I’m going to struggle… [but] if you’re making a commitment to cricket, there has to be give and take.”

Related Story: ‘Not even the best player in his family’ – Usman Khawaja fires back at Ian Chappell after ‘good player against mediocre bowling’ jibe

Beyond the winter, the other unknown awaits. Khawaja’s career is again at a crossroads; he might have worn a Baggy Green for the final time, or he might be called upon once again. During this month of Ramadan, as he finds himself leaning towards God, he is viewing each possibility through a religious lens.

“There’s a great saying in Islam, where if something good happens you say ‘Alhamdulillah’, which means, ‘Praise be to God’,” he explains.

“And if something bad happens, you say ‘Alhamdulillah’, which means, ‘Praise be to God’.”