Ian Bell, one of England’s great stylists at the crease, will bow out of the game after the end of the 2020 domestic season. Earlier this year, he looked back at his rise to the top with Wisden Cricket Monthly magazine editor Jo Harman.

Falling for the game

When I was very young, football was my favourite sport, but then cricket took over as I got into my teens. The first time I knew I wanted to play cricket and fell in love with the game was the 1993 NatWest Trophy final at Lord’s between Warwickshire and Sussex. Warwickshire knocked off what at the time was a stupidly high target [322] and I remember being in the stands and then running onto the outfield before they did the presentation on the balcony. I left the ground knowing that one day I wanted to play in a Lord’s final for Warwickshire. That’s where it all started.

When I grew up it wasn’t the easiest time to be an England fan. We’d get hammered by Australia and we’d sometimes lose to Australia A. But Warwickshire were winning the double and the treble and I was lucky enough to see world-class players in Allan Donald and Brian Lara. As a kid, to be able to watch Lara play live at Edgbaston, it was the stuff of dreams. Warwickshire had a really strong side but didn’t lose many players to England, which helped us during that period. We had an ahead-of-his-time captain in Dermot Reeve and Bob Woolmer was a coach who saw the game a little bit differently. They took the game forward.

As you go through your career you get a lot of advice and players – young players in particular – can sometimes get confused. I think it’s really important to have one person who’s a sounding board, who you trust and can go back to regularly and check new ideas out with. Neal Abberley [Warwickshire’s long-serving batting coach] knew my game from when I was 10 years old all the way through until he passed away [in 2011], by which time I’d played probably 75 Test matches. He knew the right things to say at the right time. It was also special to work with Bob Woolmer when he came back to coach Warwickshire. Neal drilled the basics into my technique and my work ethic, and Bob added a few little bits on top to enhance me from a good cricketer into trying to become a really good international cricketer.

A day after he announced his upcoming retirement, Ian Bell treats us with *this*.#BobWillisTrophypic.twitter.com/nA4Yt2cH2q

Richard Hadlee’s brother [Dayle] made quite a big statement about me when I was playing for England under-19s in New Zealand [describing Bell as “the best 16-year-old I’ve ever seen”] but I didn’t feel the pressure at the time. Even though I’ve played 100 Test matches, maybe in some people’s eyes I didn’t do as much as I should have done. But when I look back now, I know I gave absolutely everything I had in the tank when I was wearing that England shirt. I’d given everything in training and games and didn’t have a lot more to give, mentally more than anything. But whether people see it that way or not, I don’t really know.

I certainly worked hard on my technique with Neal. It was all about owning the top of off-stump, moving forward and back against spin and seam. It was always about the basics, just constantly working around good technique. It was simpler in that era because there wasn’t any T20 around. If you really wanted to become a top player, it was all about Test cricket. Now there are different avenues for young cricketers. They don’t have to be Test cricketers to earn a lot of money. They can take the T20 route, which involves a completely different batting technique now. I still believe the best batsmen play all three formats well and they transfer good technique across. But in terms of young kids growing up and trying to figure out what type of batsman they are, that’s particularly hard now.

I burst onto the scene with Warwickshire and had a really good start but then just dropped off a little bit. That can happen sometimes – opposition know your strengths and weaknesses and you have to evolve again. When John Inverarity came over to coach Warwickshire he encouraged me to go and play club cricket in Australia. Coming through the Warwickshire and England academy system, you don’t get things easy but it’s structured – you get told where to be and what to do. I had a season with the University of Western Australia in Perth and that was something completely different – a life-changing experience. Grade cricket is tough, especially if you’re an Englishman! You have to learn your way and figure things out. It was the start of me maturing into my own game and not just relying on other people. I’ll always advise young cricketers to go through that looking-after-yourself experience. I came back and had the best year I’d had for Warwickshire. We won the Championship in 2004 and I made my Test debut in the last match of that summer against West Indies. 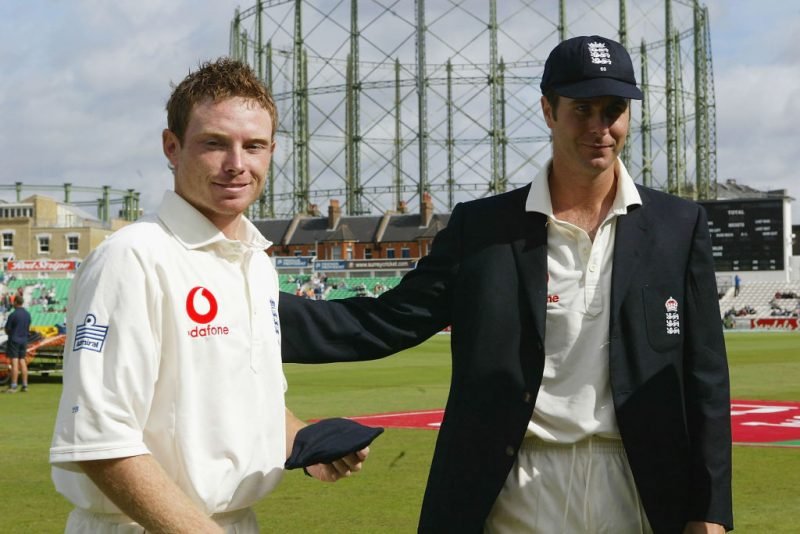 Ian Bell receives his Test cap on debut against West Indies at The Oval, August 2004

Beauty as a curse

There have been some nice-looking players who’ve copped similar criticism, like Gower for instance, and sometimes when you get to 20 or 30 and you make a mistake, it looks as though you weren’t committed or you weren’t fighting as much as somebody who isn’t as nice on the eye, who looks like they’re scrapping all the time. It did annoy me because you certainly don’t want people thinking you’re not fighting every minute of the day. At times it frustrated me but when you come out the other side, like I have now, the things that seemed a big deal at the time don’t feel like anything.

The biggest series of them all

The 2005 Ashes was another life-changing experience. Cricket was suddenly in the headlines and the likes of Fred and KP became superstars overnight. The fact it was on terrestrial TV too, it gathered huge momentum. As I look back now, it was probably something I wasn’t quite ready for. I’d played against the West Indies, I’d played two Test matches against Bangladesh and then, all of a sudden, you get hit by Australia. A lot of those guys, like Ricky Ponting, were heroes of mine growing up. I learnt that if I wanted to be a good Test cricketer, then wow, I was going to have to get better. And also that Ashes cricket is just another level. Not necessarily in terms of the standard but the whole intensity goes up a notch.

Man of The Ashes

In the three-to-four-year period from around when we got to No.1 in the world in 2011 through to the 2013 Ashes, I felt like I was at my best with the bat. As an English lad growing up, you watch ‘Botham’s Ashes’ and you want to be Man of the Series and to be able to say you actually affected a series. So for that to happen in the 2013 Ashes meant a lot. Of my three centuries, the one at Lord’s will always stand out. Lord’s is the most special place you can play cricket and we were struggling at 30-3 in that innings.

Winning the Ashes was always the pinnacle

I think the best I batted for England was my double hundred at The Oval against India in 2011. At the end of that match we became No.1 in the world. I remember being on nought for a long time, about 30 balls, and Sreesanth had bowled a really good spell, but I was in a place that I didn’t feel bothered. Generally you just want to get off the mark as quick as you can, but because of the way I’d been playing, I just felt at ease. My best innings for Warwickshire was the hundred against Somerset in a Lord’s final [of the Clydesdale Bank 40 in 2010], in a not particularly high-scoring game. As I said, watching Warwickshire win a Lord’s final made me want to become a cricketer, so to do that, score a hundred, captain my home county and get us over the line, was a dream come true. 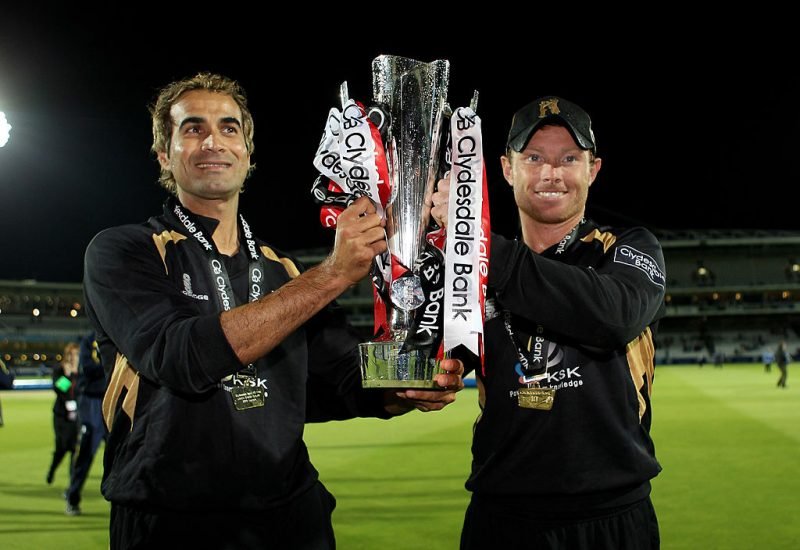 Winning the Ashes was always the pinnacle. It’s mentally and physically a long slog through those five Test matches. Emotionally you’re up and down. My favourite series was in 2010/11, when we won in Australia. Every time we see teams go to Australia, you realise how hard it is to win over there. I remember sitting in the changing room at the SCG after we’d just won the Ashes in Australia for the first time in so many years, and we felt we had conquered something very special as a group. The older you get the more you realise they’re the moments that you miss the most. You can’t recreate them, or those feelings. I could have stayed in that dressing room forever.

The way we played in the 2015 World Cup was a real tough one to take. Myself, Jimmy and Broady probably knew it was our last opportunity to play in a World Cup and we just played poorly as a group. We got it horribly, horribly wrong. There had been a lot of changes going into the World Cup, in terms of captaincy and chopping and changing the team. It was all a bit of a mishmash going into such a big tournament. That was a real low for me. I knew that the next cycle would start and my one-day career was finished.

I’ve always wanted to stay in the game. I had the whole season out injured last year, which was seriously frustrating, and at that point I needed to start getting my teeth stuck into something. So it was really nice to be able to get the opportunity to do some coaching with the England under 19s squad and see them improve through the winter. When you finish playing you want to pick something that you’ll love every minute of the day and you’re going to put everything into, and coaching is the route I’d like to go down. But you’re a long time retired so I’d like to play as long as I can, until my body can’t take it any more.