Virat Kohli says he is still hopeful of playing county cricket in the future after his scheduled stint with Surrey fell through due to injury but voiced his concerns about the controversial 100-ball format proposed by the ECB.

In an exclusive in-depth interview with India’s captain in the latest issue of Wisden Cricket Monthly, available to order here, Kohli says the thought of being a “testing sort of a cricketer” for the new format, which is set to be introduced in 2020, does not appeal to him.

“Obviously for the people involved in the whole process and the set-up it will be really exciting but I cannot think of one more format, to be honest,” says Kohli. “I’m already very… I wouldn’t say frustrated, but sometimes it can get very demanding of you when you have to play so much cricket regularly. I feel somewhere the commercial aspect is taking over the real quality of cricket and that hurts me.

“Honestly, I don’t want to be a testing sort of a cricketer for any new format. I don’t want to be someone who’s going to be part of that World XI who comes and launches the 100-ball format. I love playing the IPL, I love watching the BBL, because you’re working towards something, competing against high-quality sides and it gets your competitive juices flowing. That’s what you want as a cricketer. I’m all for the leagues, but not to experiment.” 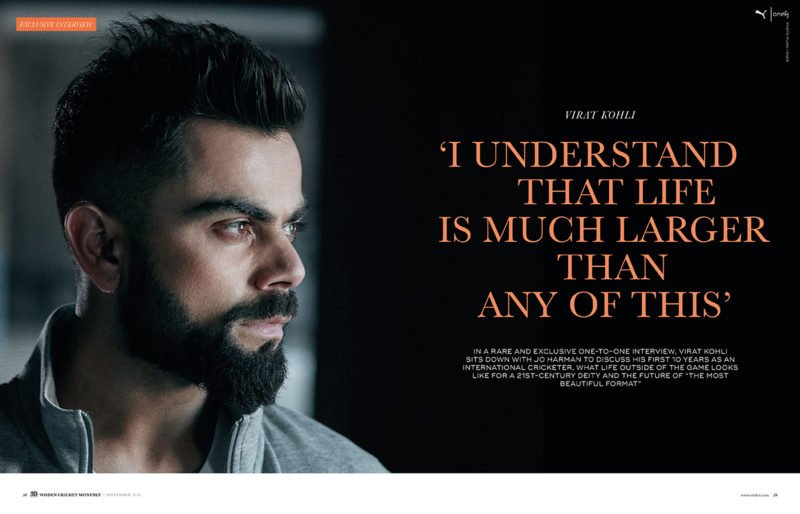 Kohli is keen, however, to experience playing in the County Championship having seen the positive impact it has had on current and former teammates.

“County cricket always intrigued me,” he says. “I’ve heard so much from so many players over so many years that it has really helped them understand their games even better. Someone like Zaheer Khan, his bowling was totally transformed after his stint.

“Also just to understand how professional the set-up over here is, how the longest format of the game is looked at with so much respect. And obviously conditions here are something that we don’t quite experience in India. Unfortunately it couldn’t happen this time but I would love to come again in future.”

To read the interview in full, order a copy of the latest Wisden Cricket Monthly, also available in digital form 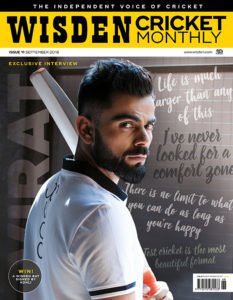