Ollie Pope, the most exciting young strokemaker in England, sat down with Jo Harman to talk about the “massive learning curve” of Test cricket, his record-breaking first-class stats and how he became a better batsman without picking up a bat.

A couple of days later Pope sat down with Alec Stewart, Surrey’s director of cricket, to talk through his options. He could either have an operation and be sidelined for three to four months, effectively ending his hopes of playing in the Ashes, or let the ligaments and tendons repair themselves and potentially be back on the field in six weeks, with the caveat that his shoulder could pop out again and take him back to square one.

“It was very tempting [to take the second option],” says Pope, speaking to wisden.com at The Oval a few days before flying out for England’s Test series in New Zealand. “But I had the operation and it was definitely the right decision.”

It was a cruel blow for the 21-year-old, who was primed for Ashes selection after scoring a career-best 251 in the season curtain-raiser against a strong MCC side in Dubai, and he admits he struggled at times during his recovery. “You miss that feeling that you’ve achieved something in the day,” he says. 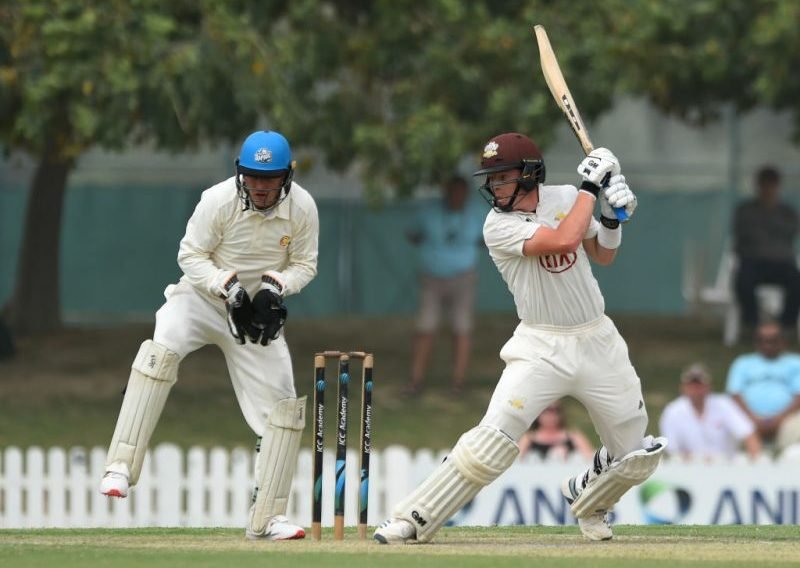 Pope on his way to a career-best 251 against MCC

He met with a psychologist to discuss the fallout from his injury and how he could keep himself busy as he underwent rehab. Golf, his second love, was out of the question. Photography and reading were suggested. Pope bought a camera to play around with, left the books well alone (“It’s a work-on for me, reading”), and, rather than taking himself away from the game, began a forensic examination of his approach to batting.

“It gave me time to reflect and think about what I can do to take my batting to the next level. I sat down with Vikram Solanki [Surrey’s batting coach] and Andy Flower [then head coach of England Lions] and we thought about what I could improve to make myself more successful.

“I looked back on some footage of what I did, not necessarily when I’ve scored a lot of runs but when I’ve felt my best, and by contrast when I felt probably my worst – like on tour in India with the Lions [in February 2019] when I got a few scores but never really felt like I was in nick.

“The way I get out most is probably that fifth stump nick-off and that’s what teams try and go for, so I decided to stand a little bit further across my stumps, on middle-and-off rather than middle, which allows me to leave the ball a bit easier, especially early in my innings. It helps me line up the ball, and I’m good off my pads. Because I haven’t played a massive amount, things can change without you realising. It’s quite hard to draw back and see what you’re doing. I actually think the time off was almost a blessing in disguise.”

Pope had somehow managed to improve as a batsman without even holding a bat and he says he felt the benefits immediately when he returned to action in late July, scoring 47 against Middlesex in the T20 Blast in his first innings back. So impressed were the England selectors that Ed Smith informed Pope he was the designated concussion replacement for the first Ashes Test, despite the fact he hadn’t played a first-class match in nearly four months. His Ashes opportunity never came but he rounded off the Championship season with 488 runs at 97.60 in his last six innings, including an unbeaten double-century against Hampshire in his first red-ball knock since the injury.

"At the end of your career when people say ‘How good was he?’, they’ll look at your average. It’s an important thing in cricket, especially red-ball cricket"

Pope’s overall first-class average is now an extraordinary 58.79 – the highest of any Englishman in history to have played 30 or more matches.

“You see a lot of stats, but that one I gave a screenshot,” he says with a grin. “Hopefully I’ll stay up there but it’s a nice one to have, to say you’ve had it at some point in your career. A lot of cricketers say they don’t care about stats but everyone cares. At the end of your career when people say ‘How good was he?’, they’ll look at your average. It’s an important thing in cricket, especially red-ball cricket. It’s not something I ever get wound up about but it’s something you can look back on and judge yourself on at the end of the season. Stats don’t lie.”

There’s a confidence and clear-headedness in the way Pope talks that’s reminiscent of Joe Root at the same age, not to mention the uncanny similarities in their set-up and strokeplay. But unlike Root, who was identified as a special talent in his mid-teens, Pope didn’t particularly stand out among his age group. It’s a peculiar statistic that a player who has scored eight hundreds in 31 first-class matches – two of those doubles – has never managed one for Surrey’s second team. 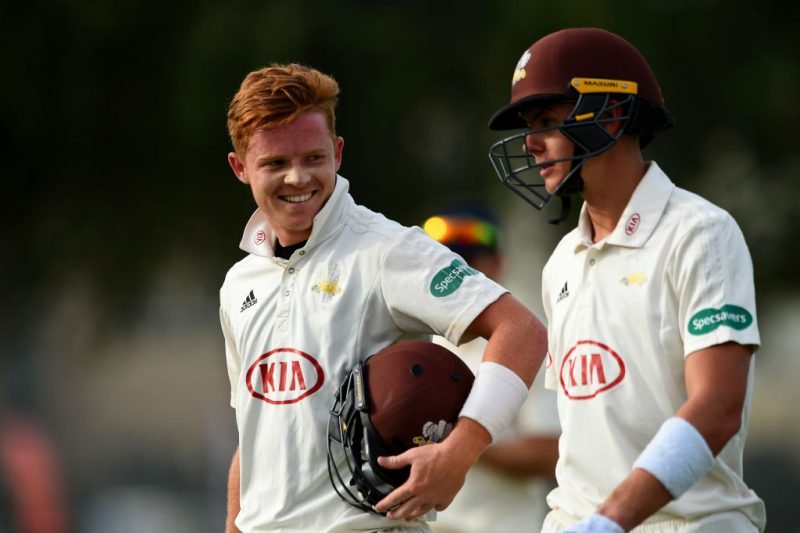 “I doubt other teams would have been saying, ‘Oh, Ollie Pope’s playing in this game’”

“I wasn’t always the most confident in my ability when I was young,” he says. “I used to get a lot of 40, 50s, 60s and get out. One person who always told me I was good was Neil Stewart [brother of Alec and an academy coach at Surrey]. He must have seen something there and he made me feel like I could do things. During the academy I’d do well and keep my place in the side but I doubt other teams would have been saying, ‘Oh, Ollie Pope’s playing in this game’. I guess in a way I have taken myself by surprise with how quickly it’s happened.”

“From the age of 18 he blossomed,” says Gareth Townsend, Surrey’s academy director. “We began to see the emergence of a game without any of the major issues that could become a problem later. He had good footwork, very good hands, his head position was always technically in the right spot – and the final part was he learned how to score proper runs.

“You’ve got to be technically good enough to stay at the crease, and he has that, to stay at the crease for four hours, six hours, because a good technique equals less error and batting’s always about keeping the error count down. His orthodoxy and his quality of assessment is simple, but so effective. He cuts well, he drives well, he’s balanced, so he knows where his off stump is, that’s why he can glide from red ball to white ball – like Root, like Williamson, he goes in and out without changing the way he plays too much.” 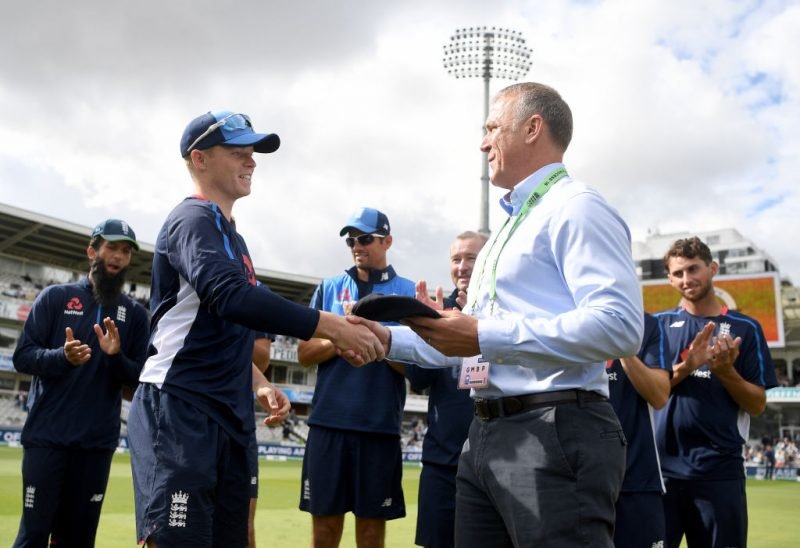 Townsend says he has seen his former pupil kick on again since his short stint in England’s Test team in 2018, an experience Pope describes as “a massive learning curve”.

Pope’s Test debut at Lord’s against India – slotting in at No.4, a position he’d never batted before in senior cricket – was just his 16th first-class appearance and he made a sprightly 28 before being stood down after scores of 10 and 16 at Trent Bridge. To say he was dropped would be too simplistic – an injury to Ben Stokes meant England needed to reinforce their bowling options, with Pope making way for Moeen Ali at the Ageas Bowl – but nonetheless it was the kind of experience that could easily dent a young player’s confidence. Instead he rounded off the season with his most expansive century to date, a near run-a-ball 114 against Essex at The Oval.

“You do see players come out of the England side and struggle,” says Pope. “That was my main concern really. There’s no reason for it to happen, so once I got my first score out of the way I was feeling in a really good place again. And I understood that if circumstances were different I might have played the last two Tests [against India].”

Pope agrees with Townsend’s assessment that at times he had a tendency to try and be “too creative, looking to impose himself too quickly”, his second-innings dismissal in the Trent Bridge Test against India, when he flung his hands at a wide delivery from Mohammed Shami and was caught at third slip, being an obvious example.

“I used to hate being on 5 or 10 because I wanted to be on 20 or 30. I wanted to be in and to be able to bat freely. At Trent Bridge I was on 16 and thinking, ‘If I get a boundary here I’ll be on 20 and off and running’, and I played a big drive and got out. That’s probably the main change in my game since. I’m more patient and happy to lower the risk, probably because I’m more comfortable in my defence and I back my ability to bat for long periods of time even more now.”

He cites Surrey’s final game of the 2019 Championship season, when Notts’ seamers hung the ball out wide to him and he was happy to leave it “for probably six or seven overs”. Pope spent more than four hours at the crease and was eventually dismissed for 106.

"I feel like I’m good enough in defence and I can punish the bad balls, so wherever they tell me to bat, I feel like my game’s pretty suited to it"

His late-season form ensured he was a shoo-in for the Test tour of New Zealand and he is almost certain to play in the first match of the series at Mount Maunganui, starting on November 21.

Where he bats is still up for grabs, but with Joe Denly – who is back in training after a recent ankle injury – set to come in at first drop, allowing Root to move to his favoured No.4 position, No.6 looks most likely, slotting in between Ben Stokes and Jos Buttler. In the longer term, Pope says the opportunity to fill that problematic No.3 spot would hold no fear for him.

“I haven’t been told if I’ll definitely be playing or where I’ll bat if I do play, but I feel like whether that be at 3, 4, 5 or 6, I’ve got a solid enough technique and good enough mindset. I’ve now had those experiences of being in in the fifth over of a first-class game a few times [in his now-regular No.4 position for Surrey] and it’s definitely something that I can deal with. I feel like I’m good enough in defence and I can punish the bad balls, so wherever they tell me to bat, I feel like my game’s pretty suited to it.”

Pope is excited by the challenge of facing an impressive Kiwi pace attack which bundled England out for 58 on their last visit, eager to pit his wits against the skills of Boult, Southee and Wagner on their home turf.

“You’ve got to be the best to beat the best,” he says. The question now is just how good Ollie Pope can become.