Ed O’Brien, Radiohead guitarist, speaks to Felix White about his love of cricket, the game’s parallels with music and growing up wanting to be David Gower.

There are good bands, there are special bands, and then there is Radiohead. An eternally evolving think-tank of a group, they’ve spent the last two decades proving that the biggest can also be the best.

During the 15-year lifespan of my own band, The Maccabees, we’d await each new record with trepidation. The perennial concern was that they were going to prove to us that everything we knew was wrong, again. Large parts of subsequent rehearsals after said release would be spent locked into grooves that would begin with charged positive intensity, until someone would look up, wincing, and mouth, ‘Too Radiohead?’.

As is custom for bands, we’d usually start by blaming each other. It’s your picky guitars. It’s your drum pattern. It’s the way you’re singing. Usually, it turned out, it was the whole thing. ‘Scrap it, it’s too Radiohead.’

We did a lot of that. I can vouch that we weren’t the only ones either. Groups, and very, very good ones at that, still stretch whole albums out of transient ideas seeded on Radiohead songs. They remain so strikingly of their own laws and universe, their impression has seared its way into the heads of musicians globally.

Their legacy is indelibly marked across global guitar culture to the degree that albums which critics considered avant-garde and borderline unpalatable on release (Kid A and Amnesiac especially) have informed the landscape so dramatically that, on reflection, they now sound like pretty conventional rock records. 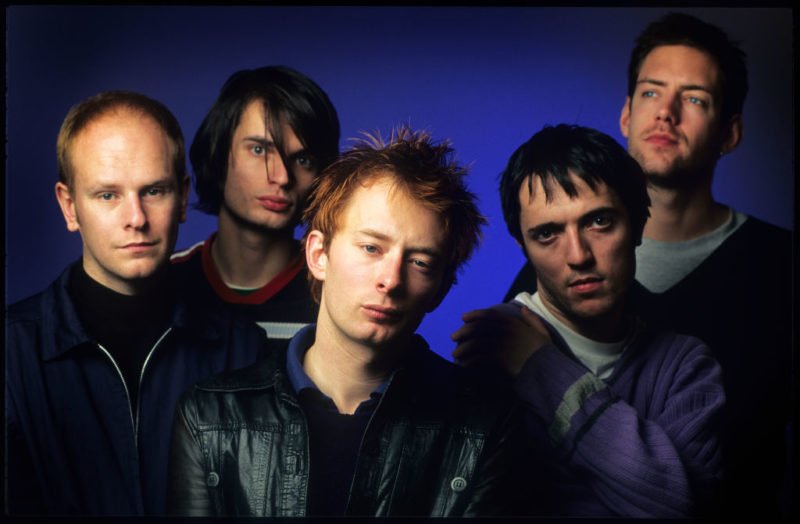 Tonight, they play the first of four sold-out shows at Madison Square Garden in New York. Outside the arena are 10-foot painted quotes from alpha sports and rock/pop stars that the space has housed over history. Eddie Vedder of Pearl Jam tells us, “You ain’t nothin’ till you’ve played Madison Square Garden”. The general theme is pretty conclusive. Playing ‘The Square’ is the stuff of childhood dreams.

For Radiohead guitarist, singer, founding member and general band glue Ed O’Brien though, it is unlikely that his childhood dreams are in danger of being etched on the walls any time soon. Meeting post-show, he tells Wisden: “Cricket was the first place I found solace as a kid, before music. These were my refuges. I had that obsessive thing.” Obsession and refuge. Snap.

An early subscriber to Wisden Cricket Monthly, years before he read NME, his own gateway moment was sparked watching on television as the West Indies dismantled England at The Oval in the hot summer of 1976.

“I’m in Oxford and it looks like a carnival in South London, like totally another world,” he recalls. “There’s sunshine and light. It was like an epiphany.” 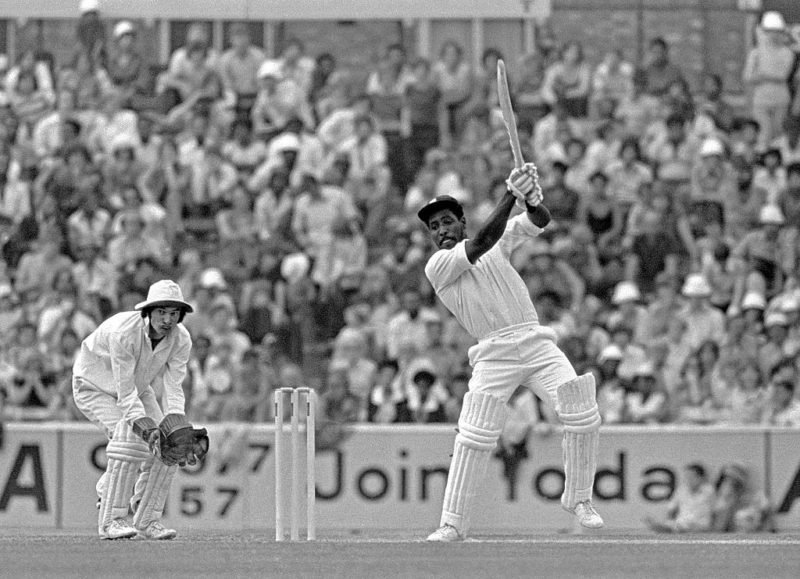 Viv and the Windies inspired Ed’s love of the game

The early signs of Ed’s attention to detail in sonic-sculpting, with a fascination particularly towards the tools themselves, was already beginning to show itself. “I was like, ‘What’s that thing Viv Richards is holding?’ ‘Oh, that’s an SS Jumbo bat.’” A wide, childlike grin flashes across his face. “The gear right!?!?.”

Having developed a chronic compulsion to sing musicians’ music directly at them over the years, duelled with the unbridled enthusiasm with which Ed talks about cricket, emptying my head of Radiohead’s The National Anthem, which I sing to myself at least five times a day, becomes challenging. I nod, resist the temptation, and we continue.

With his West Indies-inspired cricketing obsession in full step, Ed then found an icon in, fittingly, one of the most artistic English batsmen to play the game. “I wanted to be David Gower. I saw him bat on the Saturday of the Edgbaston Test in 1985.” On a beautiful summer’s day in Birmingham, Gower scored a majestic double hundred. “You know, the serendipity. Me and my mate, at 17, on the train going from Oxford. It was like going to see a great band, at the height of their powers, like U2 in 1985, an incredible experience. I was so lucky to get that window.” 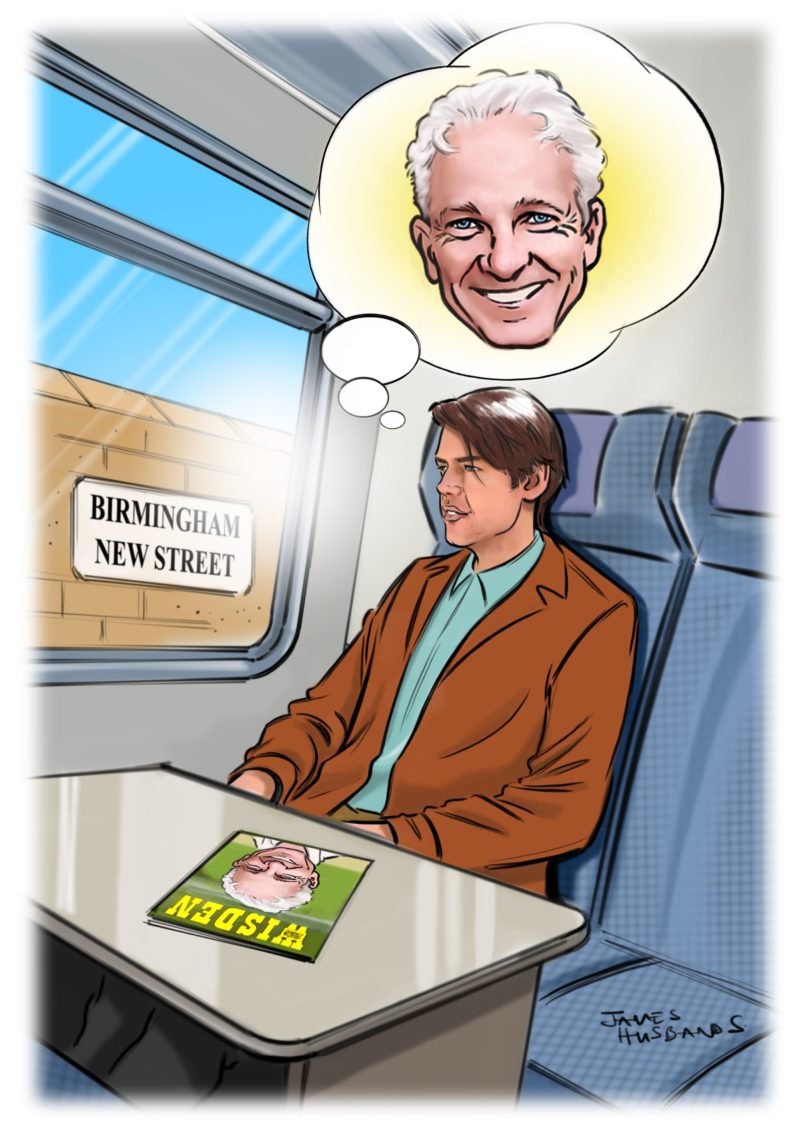 If live music and cricket do have common ground in their public service, the blissed-out simplicity of bringing people together would be it. “There’s a ritual to it,” he says. “There was the chaos of the early years but as a band we have learnt to walk out on stage and feel relaxed so we can play and be in the moment. It’s all about how you approach that day. Maybe it’s age that helps, but I really believe in ceremony and that the preparation is the key. Great gigs are like ceremony, a sporting event is like a ceremony. There’s something that’s very deep about it.”

Radiohead tonight are very, very deep. They are so mesmeric, the guitar playing so lucid and expressive, they make an arena with a legacy even bigger than the artists it houses seem small. There are moments where you can actually feel 20,000 people all experiencing the same thing at the same time. “That’s the bit I love of a gig,” says Ed. “I think arenas can be amazing places like that. I remember that from the first time we played here. It’s almost like there’s a calmness, you’re just a part of something.”

Great gigs are like ceremony, a sporting event is like a ceremony. There’s something that’s very deep about it

Ceremony and belonging, then, have proved kind rewards for obsession and refuge, and the zen-connections between passions don’t end there. “I’ve had the odd gig where I’ve been able to slow down my breathing and my heart-rate. I remember playing this show where I could divide the bar up, a four-beat bar into 32 or 64s, and play anywhere on that beat. It was the most intoxicating feeling. A batsman must have it. The great batsmen, they have all the time in the world. They’re able to stretch time with their breathing. All the chaos that might be in your own life is alleviated, it’s about being in the moment, being in the flow.”

This approach, sparked by having read Zen in the Art of Archery by Eugen Herrigel, has become something that Ed doesn’t just switch on and off for a performance, but is now embedded in day-to-day life. “They always say it’s the 1 per cent or 2 per cent that makes the difference in sport. I really believe that. My whole life is about being the best musician, human being, husband and father I can. That’s why I don’t drink anymore. I gave up 18 years ago. It was f***ing me up. I thought, ‘I can carry on, or I can be a better person’. It’s not about the time when you actually do the music, it’s the stuff around it, it’s the life you lead.”

Ed turned to meditation, a practise celebrated by, among many, Justin Langer and Shane Watson. “I’ve meditated for 17 years. It plays a massive part. I really think it’s the most profound thing you can do. It helped me when I was at my lowest ebb, I had my ground zero and I started meditation. It was really hard but it helps so much. I do it every day for 20 minutes.”

Ed’s last game of cricket roughly coincided with this change of attitude. Playing against revered folk musician, Richard Thompson’s XI, he found himself pitted against a newly signed band enamoured with Radiohead. “Coldplay were just signed and playing in the match. Chris Martin is a good fast bowler. Occasionally in interviews we get asked, ‘What do you think of Coldplay?’” Aware of Chris’ apprehension about what Radiohead think of his band, Ed doesn’t miss the opportunity to gently wind him up. “I just say, ‘Chris is a really good fast bowler’. He’s always like, ‘You f***er’.” Ed scored 50 in the match before retiring his innings.

Related Story: Thriving as an elder statesmen – five tips for the over 40s still trying to survive in club cricket

Our conversation veers through music and cricket in some detail for two hours. Littered with the customary stories of personal cricketing failures (“I was fielding on a cratered outfield, misjudged the ball and ended up doubled over, hit in the nuts”) we conclude with Ed earning some validation in the company of the game’s greats.

Introduced to Mike Brearley, they shared notes. “He invites me into this box and there’s Ian Botham, David Gower and Mike Gatting. I was so overawed. I remembered my 11-year-old self. I didn’t always have the happiest childhood. Cricket meant a lot. I thought, if he could see me now, you know. It was just amazing.” I think those words would look pretty good on the walls of the MSG.

This is an extended version of a piece which appeared in issue 10 of Wisden Cricket Monthly. Click here to subscribe to the magazine