In the fourth issue of the Pinch Hitter, Kent all-rounder Darren Stevens talks to Alex Hoad about his extraordinary career, the secrets to his longevity and the England call-up that never came.

“I feel as fresh as a 34-year-old” is not a statement likely to inspire a great swell of confidence in the world of elite sport. However when it comes out of the mouth of Darren Stevens, you’d better sit up and take notice. “There is no human being on the planet quite like Stevo,” one of his former captains told me. It’s impossible to argue.

At the age of 35, long after many of his peers had already hung up their boots, Stevens took his maiden first-class five-for. He now has 26 of them. His career-best batting performances in each of the three formats have come since he turned 39. This just doesn’t happen to normal cricketers.

This season should have been his 24th as a professional cricketer but now the 44-year-old, who signed a one-year contract extension with Kent last September, is having to come to terms with the possibility that he may have played his last game.

“It’s a horrible situation we’re in at the moment but there’s nothing any of us can do about it,” says Stevens, speaking from his home a few miles from Canterbury. “I was chatting to the missus the other night – we try not to talk about it, but we said how weird it is that I may actually never play professional cricket again. I can’t get my head around it. I’d feel like I’ve been robbed.”

If there is a silver lining to be found, it’s that Stevens believes he’s not been in better shape for a decade after passing time during lockdown with bike rides and hill runs in the Kent Downs, as well as working out in his makeshift gym.

“I don’t want to finish. It’s not just my mind that doesn’t want to finish – neither does my body. I’m not ready. With this time off it’s given me a lot of time to work on my fitness. I’m as fit and as light as I’ve been in 10 years. The weight is flying off me. I feel like I’m at the start of my career again but with all this knowledge, and my body and mind are fresh. Whenever it might be, whether that is this summer or next year, I’m 100 per cent ready to get going. There’s still plenty left in the tank.”

In July last year, Kent announced that Stevens would not be offered a new contract, only for a sensational run of form, most notably a record-breaking performance at Headingley, to force a U-turn. “Hmm, what happened there again?” he says of that display against Yorkshire.

As if he really needs reminding, Stevens walked to the middle on the first morning of a Championship fixture in mid-September with the visitors reeling on 39-5 after winning the toss. He went on to hit a career-best 237 at better than a run a ball, hitting 28 fours and nine sixes, and combining with captain Sam Billings for a sixth-wicket stand of 346 – a new record for the club and the ground. The records continued to fall as his haul of 5-20 in Yorkshire’s second innings made him the oldest player since WG Grace in 1895 to score a double hundred and claim a five-wicket haul in a first-class match. 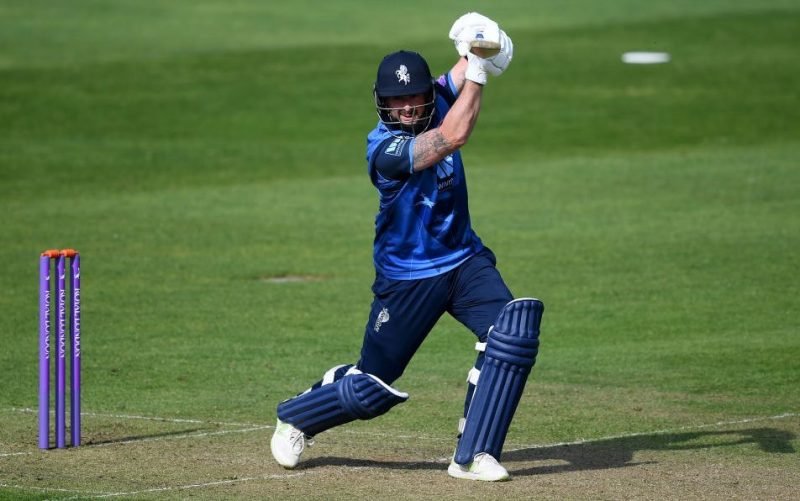 Stevens says a conversation on the golf course with Simon Willis, Kent’s high performance director, a few weeks earlier had helped de-clutter his mind after a miserable team performance against Essex at Canterbury in which the hosts had been skittled for 40 in their second innings.

In his next match at Trent Bridge, Stevens struck a quick-fire 88 and took 10 wickets in a match for only the second time in his career.

“The only thing I’d done differently was I had a chat with Simon. I told him I felt a score away from flying but I kept getting out. I went and had an hour-and-a-half hit with him and the next game we went to Notts. My first scoring shot was off [Ravi] Ashwin – a six straight over his head. I wasn’t thinking about it. I saw it, I hit it. That’s how I’ve played my whole career. It was just a couple of little technical things which he’d spotted. He’s known me since 2005 and knows my game inside out. It was nice of him to offer to help me.”

“People are going to talk about what they like, but no matter what they say, I’m not going to stop”

A few days later Stevens made history at Headingley.

“The thing is,” he says, “after that Yorkshire game, the only stuff I read online was about my age – more was made of that than the cricketing side of it. I do find it a bit frustrating. I can’t do anything about it though. People are going to talk about what they like, but no matter what they say, I’m not going to stop. I’ll be the one who chooses when I do.

“It’s all about the body. If there’s one part of my body I struggle with, it’s a bit of wear and tear in my knees and cartilage. For four years I’ve been having this injection called Monovisc [which is commonly given to osteoarthritis patients] and it’s kept me going. 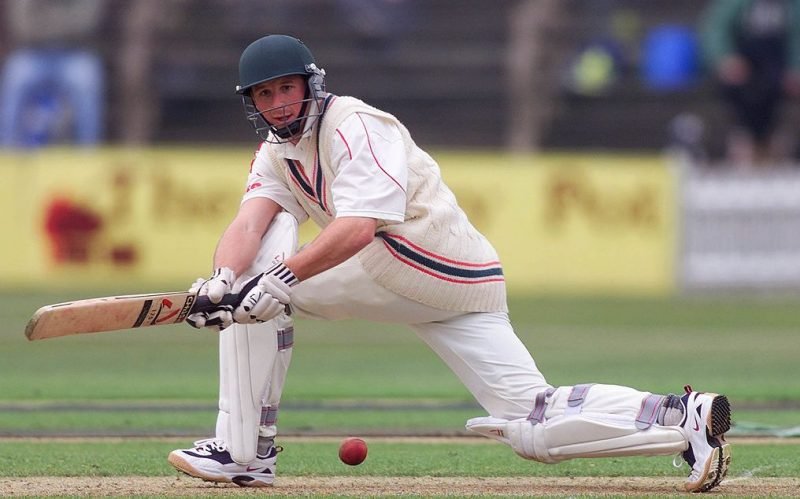 “I feel great at the moment. I talk to all the old boys around the circuit, blokes that I played against when I was a youngster who are coaches now. Every time we play against Surrey I have a good catch-up with Alec Stewart. He calls me youngster. ‘You still going youngster? How’s the body?’ Every time I see him he says, ‘Keep going. Why stop?’ To come from the Guvnor… I’ll keep playing as long as I can, why shouldn’t I? So long as I’m doing my job and winning games of cricket for Kent, that’s all I’m bothered about.”

Stevens is also proud to be a source of inspiration for other cricketers, whatever level they play at, having received messages of gratitude from club players who are taking his lead. “It’s an honour,” he says. “It’s great if I am an inspiration to these blokes that are in their early and mid-40s who want to keep playing. I’m still doing it professionally so why can’t they do that socially at their clubs?” 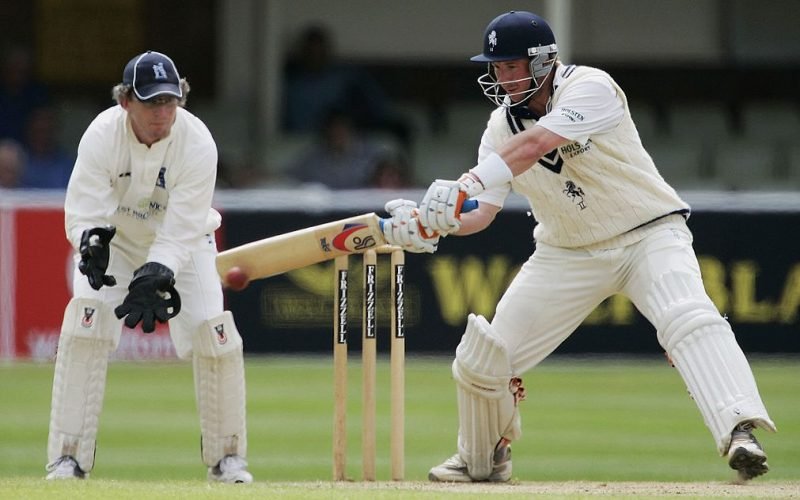 Stevens enjoyed instant success at Kent, scoring 1,277 runs while accounting for 17 wickets in his first season in 2005

Encouragingly for the man on the street, the secret to Stevens’ longevity is not high-tech cryochambers or sleeping in oxygen tents – it’s largely mind over matter. “Mentally, I just love the game and the challenges it presents. I think the  act I was a late developer with the ball has helped my body last this long too.”

Incredibly for someone with more than 500 first-class wickets, only six of them came in the first eight years of his career following his first-class debut for Leicestershire in 1997. After moving to Kent ahead of the 2005 season, Stevens was transformed into a genuine all-rounder, with a blend of nagging seam and swing which more than makes up for his lack of velocity. Even that took its time to develop though – 2010 was the first season in which he claimed 20 Championship wickets.

He concedes that his lack of international recognition, while frustrating, has also extended his career.

“As much as I wanted to play international cricket, I think it probably also helps me that I didn’t. To me, I’m still performing at the highest level I ever have. I have a lot of friends that have played international cricket that retire soon after they finish, basically because they lose the desire to carry on.”

The closest Stevens came to full international honours was a Lions call-up in 2010 when he scored 250 runs at an average of 80 in a triangular tournament against India A and West Indies. And while he says he wouldn’t swap “five or 10 years of my career for some England caps”, there remains a sense of what might have been.

“It’s every player’s dream to play for their country. I’d have loved to do it. I’d like to think I was good enough, but it seems obviously I wasn’t. I suppose because I didn’t get in there must have been better players ahead of me. I don’t know… there are a lot of people that haven’t played for England because they played in the wrong era.”

Stevens describes T20 as his favourite format and says he’s “gutted not to have played more of it” in recent years after losing his place in Kent’s side in 2018 before an ill-fated loan spell at Derbyshire last summer. Spitfires fans still have fond memories of him hitting the winning runs in the 2007 T20 Cup final and he remains hopeful of adding to his 145 sixes in domestic English T20, a tally which puts him third on the all-time list.

“The chat is that we will only play the T20 Blast if this season starts,” he says. “That’s the best way of bringing revenue in. The ECB and counties are losing so much money through all this missed cricket, fingers crossed we can get some international cricket played and we might be able to get some T20 played at the end of the summer.”

“One thing’s for sure though – I won Player of the Year last year, why would I want to quit?”

Like everyone else, Stevens is playing a waiting game to see what the world looks like in a few months’ time – though he is keen to agree another extension to secure his future. “In time, the PCA are trying to work with clubs about players in their final year. They can’t play any cricket to earn their contracts. One thing’s for sure though – I won Player of the Year last year, why would I want to quit? Whatever happens, happens. I’ll play cricket again, somehow, somewhere, whether it’s at Kent or somewhere else.”

If Kent do decide to end his tenure, he is unlikely to be short of offers, particularly now with coaching skills to add to the all-round package.

“A couple of counties came in last year and wanted me to be a player/coach,” he says. “I’ve done loads of coaching over the past two years and I’ve done my Level 3 qualification. The best thing I’ve ever done is going to Cape Town the past two winters and spending the winter playing. It was like back when I was a kid, jumping on a plane pretty much the day after the season finished.

“I had three months out there. For my cricket and my brain and my body, it was brilliant. I spent a lot of time coaching with Gary Kirsten, picking his brains on batting. I’ve done a lot, including quite a bit for Kent last year. I’ve done one-on-ones and a mix of ages. I really enjoy it. I’ll start doing my own stuff come the end of the summer – if we’re allowed out.”

Related Story: Darren Stevens hits back at ‘unfair’ criticism that he is what’s wrong with county cricket

There’s no doubt Stevens has plenty to offer as a coach but he still has unfinished business as a player when he eventually returns to the middle. The hairline might have shifted and the laughter lines become more pronounced, but he remains as hungry for success as that young kid from Leicester who made his debut 23 years ago.

For someone who plays the game he loves with a smile on his face, and has put a smile on the faces of so many others, wouldn’t it be nice if his final chapter has a happy ending.