After a difficult 2019, a run-filled summer this year ended with Ben Duckett winning the T20 Blast for the third time. The 26-year-old speaks to Jo Harman about his England experience and how he’s matured at Notts.

Most of the pre-tour discussion revolved around whether Alastair Cook would be partnered with the fire of Duckett, who’d slayed county attacks at a strike rate of 80 the previous summer, or the ice of Haseeb Hameed, the 19-year-old prodigy who’d had the purists purring in his breakthrough year with Lancashire.

Duckett’s ability to dominate spin got him the nod for the first Test against Bangladesh at Chattogram, but he quickly found that county cricket was a poor substitute for facing an armada of world-class spinners on raging turners.

After three low scores he made a thrilling but frenetic half-century in the second Test at Dhaka – a knock which put the tourists on course for a series-clinching victory, only for England to collapse from 100-0 to 164 all out as they suffered their first-ever Test defeat to Bangladesh – and was then shunted down to No.4 for the India series to accommodate Hameed.

While Hameed slotted seamlessly into Test cricket and was widely declared – by Virat Kohli among others – to be English cricket’s next batting superstar, Duckett’s technique was ruthlessly unpicked by Ashwin, who dismissed him three times in three innings for scores of 13, 5 and 0. The greenhorn left-hander played no further part in the series and hasn’t played Test cricket since, his only international appearance of the last four years coming in a T20I against Pakistan in May 2019.

“I was young and raw,” Duckett tells Wisden.com, recalling the winter of 2016. “And they’re alien conditions to a young English cricketer. I would probably say playing spin is the strongest part of my game, but on turning wickets against some of the best spinners in the world my technique got found out. I actually think the conditions in Bangladesh were far tougher than in India but I got worked over by one of the best off-spinners the game has ever seen.”

Hameed and Duckett’s careers have diverged since, but perhaps not in the way those who witnessed their first steps as international cricketers would have expected. While Hameed’s form inexplicably nosedived, Duckett is now well-established as one of the most prolific cross-format batsmen in county cricket, even if the closest he’s come to England’s Test team since then is when he poured a pint over the head of James Anderson on the 2017/18 Ashes tour. The incident resulted in Duckett, who was on Lions duty at the time, being suspended from playing for the rest of the tour and fined – a punishment which, in hindsight, exceeded the crime. A victim of the hysteria which surrounds an Ashes series as much as his own poor judgment.

He now finds himself sharing a dressing-room again with Hameed. Both players moved to Nottinghamshire – Duckett in 2018 and Hameed a year later following his release by Lancashire – in the hope that a change of scenery could help them fulfil their potential, and while it’s early days for Hameed, the move appears to be bearing fruit for Duckett after a challenging first season for both him and the team, which saw Notts relegated in the Championship without winning a game.

In the abbreviated summer just gone, Duckett, in at No.3 at his own request, scored 394 runs at 56 in the Bob Willis Trophy, hitting two centuries. He was also the lynchpin of the Outlaws’ T20 Blast triumph, making four half-centuries, including 53* in the final against Surrey to steer his side home – in the process becoming one of only four players to win the English domestic T20 competition on three occasions. At 26, there is plenty of time to add to that haul. 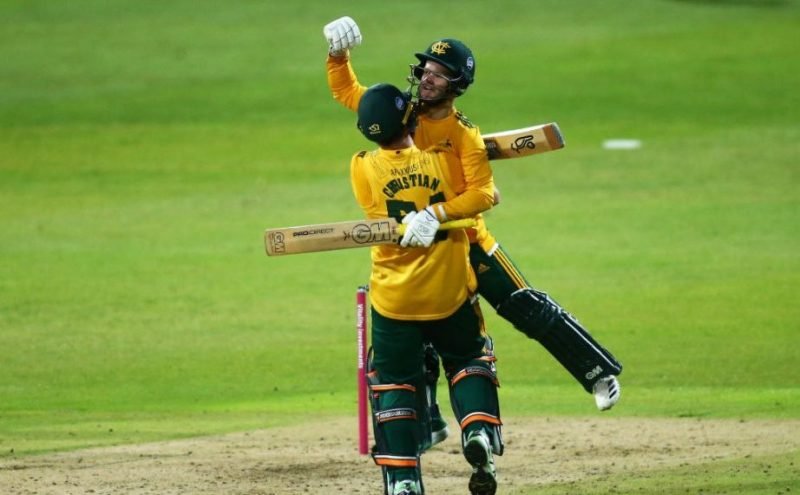 Duckett says he’s never felt better, benefitting from a new fitness regime in lockdown (in contrast to a more laissez-faire approach during his time at Northants) and resisting the urge to overthink his England ambitions.

“It’s been a journey,” he says. “I’ve certainly grown up a lot and I feel like my game has come a long way in the last 12 months or so. It was probably a blessing to have that experience with England at that age. If it had happened at 27 or 28, guys probably struggle to come back from that. But I think the fact I was so young, it’s allowed me to correct things over the past few years. Fingers crossed, if I can keep going, and if I do get a chance again, then I can try and put those mistakes right. I’d certainly be a lot more ready than I was four years ago.”

Duckett remains, in essence, a shotmaker who looks to dominate bowling attacks, but he’s now more confident leaving the ball outside off-stump and has worked hard with Ant Botha, Notts’ assistant coach, on expanding his leg-side game. He’s also changed his grip and his trigger movements, all with the aim of making him a more consistent run-scorer in red-ball cricket. “I’m certainly less erratic than I was,” he says.

The innovation and imagination which characterises Duckett’s game makes white-ball cricket his most likely route back into the England set-up, even if competition for places is unprecedentedly fierce.

Shortly before his Test debut, Duckett had scored a brace of fifties in the preceding ODI series against Bangladesh and looked set for a run in the side before his travails against Ashwin muddied the waters. He hasn’t played an ODI since, although he served Eoin Morgan with a reminder of his talent in an England intra-squad match in July, hitting 68 from 65 balls at the top of the order.

He acknowledges there are several batsmen he’ll need to leapfrog if he’s to have a sniff of making England’s white-ball teams, and several more coming up fast in his rear-view mirror, but there is a difference to Duckett which will ensure he’s part of the conversation, in particular his ability to score freely and inventively against spin. CricViz data reveals that only four batsmen in the world have scored more T20 runs playing unorthodox shots than Duckett in the last three years, with the reverse-sweep a particularly profitable stroke.

For now, though, he’s content to concentrate his energies on Notts and let the rest take care of itself, knowing that The Hundred, in which he’ll represent Welsh Fire next summer, will provide a new platform to prove himself one of the country’s most skilled and watchable batsmen.

“In the past I’ve got caught up in worrying too much about how to get back into the [England] side,” he says. “The goal is certainly to get back into the set-up but the main thing is to focus on myself, and that’s what I did last summer. It’s probably the first time I’ve really enjoyed cricket properly, without putting too much pressure on myself. I’m working harder than I’ve ever worked in my life, on and off the field. Next summer I’ll try and repeat what I did last season, and let’s see what happens.”