Musa Khan received his maiden Test cap in Pakistan’s second Test against Australia at the Adelaide Oval on Friday, November 29.

Who is Musa Khan?

Musa, 19, is the latest in Pakistan’s long line of exciting pace bowlers. The right-arm quick was one of three teen seamers included in their squad for Australia, alongside 16-year-old Naseem Shah and the only slightly more experienced Shaheen Afridi. On Friday, he became the 238th Test cricketer for Pakistan, and was handed his cap by the great Wasim Akram.

It wasn’t his first international game, however. That debut came earlier on the tour, in the third T20I at Perth’s Optus Stadium. It wasn’t the ideal start: he finished with 0-39 in 3.5 overs.

His has been a quick climb up the ranks since turning out for his country in the Under-19 Cricket World Cup 2018 in New Zealand.

How did he start?

Musa took seven wickets at 26.28 from five games in the 2018 U19 World Cup, where Pakistan finished third. He contributed with the bat too, scoring an unbeaten 18-ball 23 in a group stage game against Sri Lanka to help his team seal a tense win. In the game against India, he finished with four wickets.

He was also named in Pakistan’s team for the 2018 ACC Emerging Teams Asia Cup, an eight-team competition jointly hosted by Karachi and Colombo. 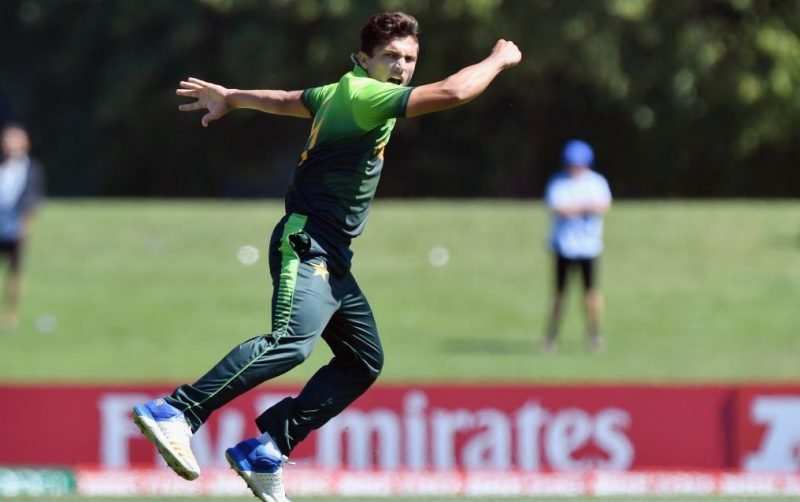 Musa impressed during the Pakistan Super League with his pace, but struggled with his accuracy.  He did pick up eight wickets from seven games, but an economy of over 10 didn’t make for great reading.

After a forgettable T20I debut, he showed signs of brilliance in Pakistan’s second practice game against Cricket Australia XI, where he took two wickets from 14 overs.

Musa’s major challenge, as it would be for any young fast bowler, is to strike the perfect balance between pace and accuracy. With Australian conditions promising significant assistance, the quicker bowlers tend to get carried away. Thankfully, he has one of the best in the business to guide him.

During the U19 CWC in NZ, I was blessed to meet Musa Khan & some of his colleagues in the team hotel. They were so keen to ask questions. Shaheen Afridi & himself together again at senior level ??class of #U19CWC2018. Hassnain & Nasim Shah so young. Pakistan so blessed with pace.

“Sometimes you get carried away because of the bounce, it makes you feel like a world beater, but it’s not the case,” said Waqar Younis, Pakistan’s fast-bowling consultant, before the start of the series. “You really have to bowl in the right channel to get wickets. That’s my job, to help them out and tell them about bowling in the right areas. I remember my own time when I first arrived in 1989, it’s not an easy place to bowl but with these guys – Mohammad Musa, Naseem Shah and Shaheen Afridi – I’m really excited.”

He might still be raw and short on experience, but with his skills, he seems to have already impressed quite a few, including the skipper.

“Musa has potential. He’s short, but he’s rapid,” Azhar Ali has been quoted as saying by PakPassion. “He’s another talented guy, he’s very fit and hopefully whenever he gets a chance, he’ll perform. He bowls a lot in the nets but it’s a different thing in Test matches … Starting well is important and if he can start well, he can hopefully give us a lot of good overs.”