He’s only just returning to top-flight cricket after many months of inaction because of injuries, and while the wickets haven’t come in rushes, Steyn has notched up a nice personal milestone: an ODI half-century.

“That wasn’t me,” he joked afterwards, having top-scored for South Africa with an 85-ball 60 in his team’s 120-run win over Zimbabwe on a treacherous pitch in Bloemfontein.

The next best score for South Africa was Aiden Markram’s 35 from the top of the order, though Andile Phehlukwayo’s 28 in a 75-run stand with Steyn for the eighth wicket was as crucial. For Zimbabwe, Hamilton Masakadza’s 27 was the best score.

Related Story: The selection questions facing South Africa ahead of The Oval decider

Steyn later picked up 2-19 from six overs – Imran Tahir led the way with 6-24 – but won the Player of the Match award for his batting, a rare occurrence in the champion paceman’s glittering career.

He has scored two half-centuries in Test cricket, but had a top score of 35, against India in Jaipur in 2010, before this one. 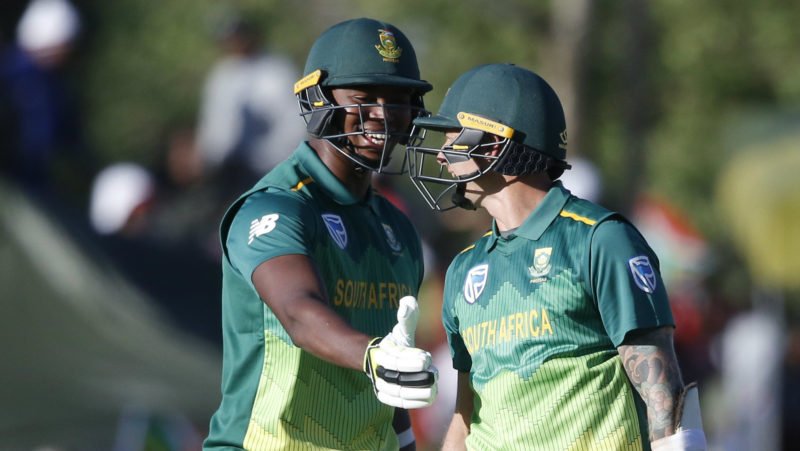 Lungi Ngidi looks as surprised – shocked? – as Steyn after the latter’s half-century

“It’s nice,” Steyn said of the match award. “When I started my career, I joked with the guys and said I could bat a little bit! It’s taken me almost 14 years to score my ODI fifty! Maybe that’s just because we’ve had a strong batting line-up.”

Related Story: Why Zimbabwe have a realistic shot at the T20 World Cup semi-finals, even if they lose to India

Indeed, 67 times in his 117-match ODI career, Steyn hasn’t even been required to bat.

“In some ways, I’m disappointed that I couldn’t have done that earlier in my career and I had to wait this long, but it’s nice to score runs and contribute,” he said.