Tim Murtagh claimed his maiden international five-wicket haul to power Ireland to a tense five-run victory over Zimbabwe in the second of three ODIs in Stormont. Having also won the previous ODI, Ireland thus clinched a historic series victory with a game to spare.

This is Ireland’s first series victory against an ICC full member, and their first on home soil since 2014.

Apart from Murtagh’s starring role with the ball, contributions from youngsters James McCollum and Lorcan Tucker with the bat proved to be just as crucial. McCollum hit 73 off 92 deliveries, while the latter came in at six and hit a career-best 56, emulating Paul Stirling (52), who passed 4,000 runs in One-Day Internationals.

McCollum, who has excelled in club and inter-provincial cricket, was understandably delighted after bringing up his maiden fifty in his seventh match. “It’s great to find my feet in international cricket and it’s sweeter to find the win as it’s our first in a while,” he said. 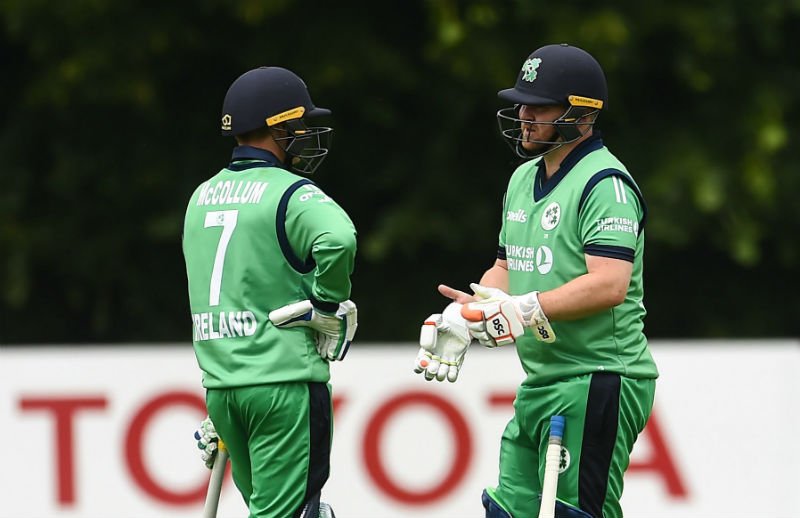 “It’s great to find my feet in international cricket”

“This is up there, for me. We’ve had a couple of tough series’ so it’s good to come away with the series win against Zimbabwe, despite not being at our best today,” said the 23-year-old.

McCollum is one of the several new faces the Irish team has featured in recent months. The youngster feels the influx of fresh talent, in combination with the more experienced core, bodes well for the team. “There’s a lot of good guys who have come in and made debuts over the last number of months. We’ve got that blend of new guys coming through as well as the experienced guys who offer advice when needed.”

Murtagh, 37, who has represented Ireland in over 70 internationals since 2012, showed that the experienced guys are around to offer more than just advice. Not only did he bring up his maiden international five-for, it was also his first in all List-A cricket.

“It’s my first List A five-for, so it was nice to get that today. I spoke in the huddle about setting the tone and when I walked out, I thought ‘right, I’m going to have to act on those words now’”. It was important to get those three wickets early, and I thought everyone chipped in.”

He praised former Warwickshire seamer Mark Adair who bowled the final over to collect a famous victory.

“That’s kind of the best final over from a youngster that I’ve seen – I’ve been in that situation lots of times and probably lost a game for whatever team I was playing for. For him to nail two or three good yorkers and execute his plans was impressive. Hopefully, he can kick on from that and take confidence for the rest of his Irish career,” added Murtagh.

Ireland will be looking to end the series on a high and complete the whitewash when the two sides meet at Stormont once again on Sunday.