England and Pakistan might have shared the spoils, but really there was only ever going to be one winner, writes Taha Hashim.

There’s something about Jofra. Of course there is – he’s the name on everyone’s lips. But here he is, at The Oval, ball in hand, ready for Pakistan. And my God, he’s quick.

An international debut came last Friday, but this is Archer’s first ODI on English soil, at the venue where the World Cup will kick off later this month when South Africa take on the hosts. For now, Archer isn’t in England’s squad for the tournament. With every ball out of the hand, the likelihood of him being absent for that match diminishes.

Imam-ul-Haq is the batsman on strike. The first ball is rapid but Imam’s bat can locate it, dropping it to the leg-side. The story takes a turn for the next four deliveries. Pace and zip are two buzzwords that get thrown about when fast-bowling discussions take place; Archer has both in abundance but to describe him in such generalist terms is reductive. He’s different to others: calm, cool, ambling into the crease as if he’s just warming up, only to leave the batsman quaking. To bowl fast – really fast – don’t you have to be a little angry, a little mad? Archer seems at ease with the world, delivering rockets for his own amusement. 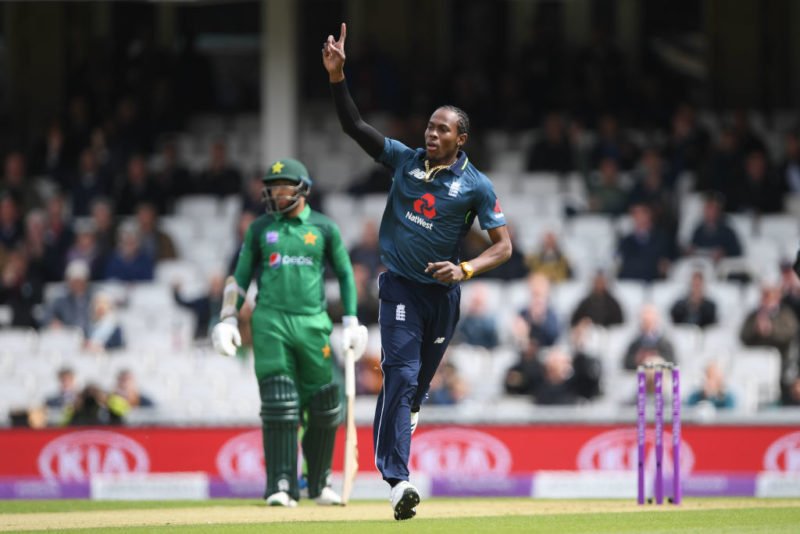 Imam’s bat pokes for three balls with little conviction, the ball hoovered up by the gloves of Jos Buttler. The edge hasn’t come but Archer has the crowd with him, oohing and aahing. The fifth ball of the over is a bouncer. Archer finishes up his first six with a dot. A maiden.

There are few better ODI opening bowlers than Archer’s new-ball partner, Chris Woakes. The Warwickshire man has been Mr Reliable for Eoin Morgan across England’s white-ball revolution, and while he’s not going to give much away, he’s the secondary act for today, just a brief intermission before we get back to the Archer show.

Archer returns with Fakhar Zaman on strike. The last time Fakhar batted in an international here, he wrote his name into folklore with a hundred against India in the final of the Champions Trophy. He gives it a whack, sure, but there’s consistency to go with the combustion; the left-hander averages above 50 in ODIs at a strike-rate close to 100. Against Archer, though, he’s having to be watchful. Forget dealing in boundaries, this is going to be a quest for survival. 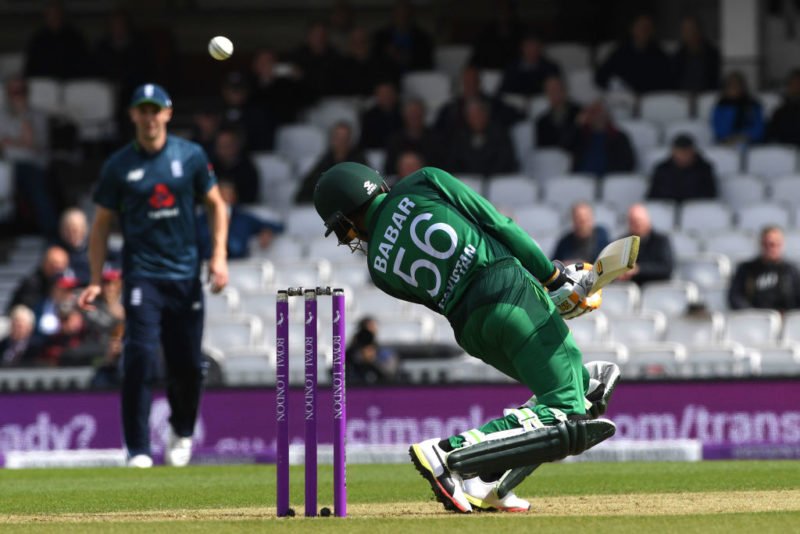 Babar sways away from Archer’s bouncer

The fourth ball of the over sees Fakhar shape to play the ball through the leg-side but the ball trickles into the off-side. He commanded Bhuvneshwar and Bumrah two years ago, but he can’t do the same here. The death knell arrives. Archer gets the ball to move away, Fakhar pokes, the edge flies, and while Root juggles with the ball for an age in the slip cordon – toying with the crowd’s emotions – he holds on. Archer has the wicket that was coming for quite some time. Mark Wood might have seen him as Asprilla, but Archer has one hand in the air like Shearer. After two overs, he hasn’t conceded a run.

The first two overs are a bit too special, and the rest of Archer’s opening spell is never going to live up the ferocity of his opening dozen. Still, there are moments for the highlights reel. In his third over it’s a leg-side wide, the first run conceded off his own bowling. If anyone’s going to dampen Archer’s figures, it’s not going to be a batsman.

His fourth over sees him go short to Pakistan’s little wizard, Babar Azam, who adds an artistic touch to everything he does at the crease, whether it be moving onto his front foot or twirling his hands for a whip through the leg-side. It’s a delightful passage of play; Archer sends one whistling past Babar who weaves and ducks with immaculate control. Two superstars sparring in what could become one of international cricket’s headline bouts.

Archer finishes with some special numbers – figures of 4-2-6-1 and an average speed, according to CricViz, of 143.94 kph – but the impression he leaves is something else entirely.

The day is a battle between sun and rain, and the clouds have their say. But Archer emerges the real winner.