Adam Collins revisits the thrilling 1999 World Cup semi-final between Australia and South Africa at Edgbaston, concluded by the famous run out of Allan Donald – perhaps one of the most iconic moments in the game’s history.

To begin, a confession. Parochialism is mostly lost to me in cricket. I’m a proud Australian, make no mistake, but live and die by the results of the national team I do not. Even by journalistic standards where it is frowned upon to get overly excited. Some do, and I have no problem with that, but not me. It’s complicated. But that detachment was far from developed in 1999. As a lad of 14, how Steve Waugh’s fellas went in the World Cup meant more to me than was probably healthy. Whenever the seismic Edgbaston semi-final pops up on television, my emotions still spill over.

The evocative Bill Lawry TV call of the frenetic finale is one special part of it; Adam Gilchrist shrieking ‘FLEM!’ to will the ball from Damien Fleming’s hands to his gloves gives me a chill just thinking of it. But nothing quite captures the utter palaver of it all like this still, taken by the great Patrick Eagar.

It was a scene that never should have been after Lance Klusener struck Fleming for two gloriously timed clubs through cover. It left four balls, one to get for South Africa. When Darren Lehmann missed Allan Donald’s exposed stumps from close range, the dream was over. Surely.

But next ball, Donald’s over-correction prompted this defining moment, Eagar’s shot taking centre stage. In it, eight Australians feature. Fleming is hunched having rolled the return to Gilchrist. The ball isn’t visible – masked by his body – but its trajectory is obvious through the keeper’s eyes. The unorthodox method of delivery was later linked to a recent night of ten-pin bowling.

The captain, Waugh, is the closest to both men, surveying the path of the ball. It was out of his hands now. His twin, Mark, is there too, after executing the perfect backhand diving flick to Fleming with the savvy to aim for a conduit rather than the stumps himself. 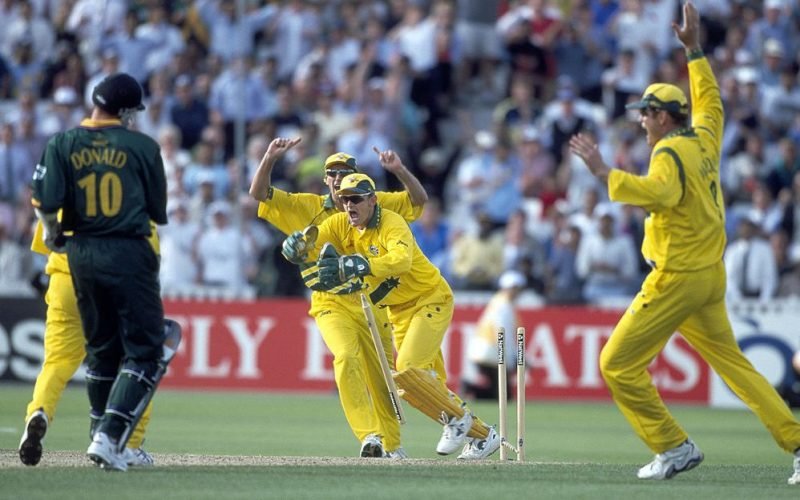 Paul Reiffel is dead still at short fine-leg, nearly off the hook after dropping Klusener the previous over. That 49th was bowled by Glenn McGrath, seen here running in from the third-man circle. Shane Warne is behind Gilchrist, about to be forever hailed for his own masterful display to make all this possible.

Then the Zulu. He’s not even watching, having run so hard that he’s a length of the pitch beyond his ground. By contrast, sprinting belatedly is Donald; his lonely bat discarded, not yet half way to safety when the stumps are broken. In the case of both, proof that pressure doesn’t discriminate.

I raced around the house in the middle of the night like I was Flemmo or Gilly or Junior or Pistol. This may be their moment and their picture, but it will always be mine as well. A thrill foreign to me now, but one I’ll always treasure.