The pink ball will get its first Ashes outing in the day/night Test at Adelaide. We used the CricViz ball-tracking database to find out if pink really is worth more than red for the seamers.

For pace bowlers, the raw averages suggest the red ball is fractionally more dangerous than the pink – the seamers have a combined average of 31.82 in day/night Tests, compared to 30.96 runs in all Tests since the pink ball was first used.

More revealing, however, is the difference in the cost of wickets between ‘day’ – the first two sessions – and ‘night’ – the final session, when the combined fast bowling average falls from 34.41 to 27.87.

Related Story: Quiz! Name every batsman with a 50-plus score in day/night Tests

The ball swings and seams more prodigiously at night, with the pink pill seemingly moving through the air less than the red, and slightly more off the pitch, as our graph shows. 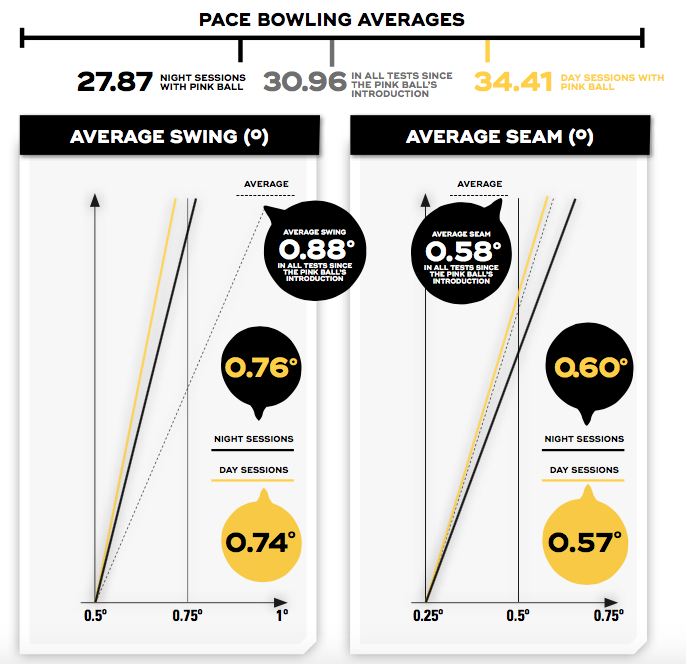 Of course, we are considering a number of venues in a number of countries, and comparing Dubai to Durban will only get you so far. Looking at Adelaide specifically, where the inaugural day/night Test was played in 2015, it’s a different story. Although the pink ball hasn’t swung quite as much at the venue, it has seamed almost 20 per cent more there than the global average, moving off the pitch on average 0.68 degrees per ball.