On a sluggish surface that made India’s smooth stroke-makers plough around for runs, the unheralded Shivam Dube shrugged off a scratchy start to blast his maiden international half-century, justifying India’s bold call to tinker with the coveted No.3 spot, writes Aadya Sharma.

There has been considerable buzz around Shivam Dube over the last year.

In December 2018, Dube, a fairly obscure all-rounder, created flutters by tonking five sixes in as many balls in a single over during a domestic T20 game. The very next day, he was staring at a Royal Challengers Bangalore contract worth INR 6 Crore (£640k). It’s the kind of rags-to-riches story the IPL specializes in.

India loves seam-bowling all-rounders, especially those who can cart the ball a fair mile. With Hardik Pandya sidelined, Dube, a well-built compulsive big-hitter, was fast-tracked into India’s flimsy T20I middle order, but by his fifth game had tallied up just 10 runs, with opportunity limited.

Against West Indies at Thiruvananthapuram, the pitch was sluggish and difficult to score off, so much so that it forced a usually sublime Rohit Sharma to try a gaudy scoop and see his stumps getting cleaned up. If that mode of dismissal was surprising, the boisterous crowd were in for an even bigger shock, as Dube walked in at first-drop, a position Virat Kohli customarily occupies.

Over the last year, Kohli has scored 377 runs in eight innings at the coveted No.3 spot; three others have scored just 185 in six. In the game before, a pumped-up Kohli had crunched a career-best 94* at three. The India built under Shastri and Kohli does not fiddle with things that are working, but at 24-1, they decided to give Dube a push.

Whether the plan was to inject some impetus to a stuttering innings, or just to see what the all-rounder was capable of, at first it didn’t seem to be working. Dube looked woefully out of sorts to begin with, hitting the ball at all the wrong angles, bereft of any timing. An intended slap over cover, off Pollard, found only the toe-end of his bat, and instead, trickled to backward point. After 14 balls, he had 12 runs. It did not look good. 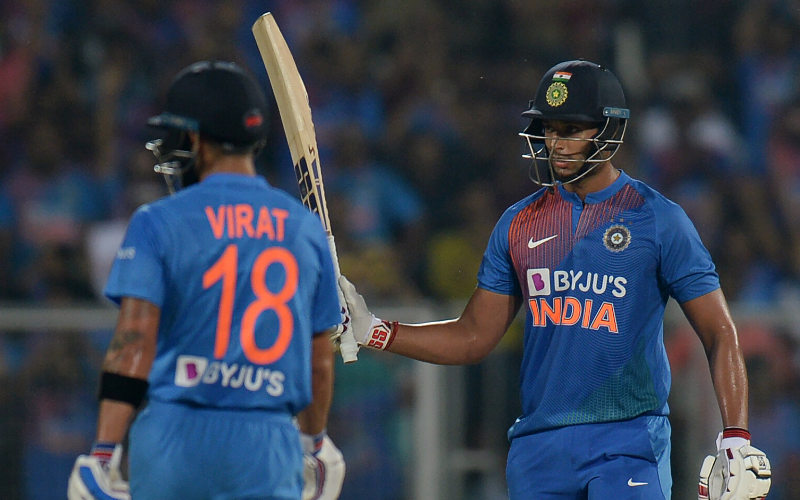 Goaded by Kohli at the other end, Dube found his touch after an unflattering start

As always happens with new talents, there were questions whether Dube was ready enough for the big stage. A blink-and-you’ll-miss-it IPL campaign reaped just 40 runs in four games, led some to criticise the hefty price tag. The No.3 spot looked like another prestigious honour Dube was unable to justify. And then, something clicked.

The catalyst was a bouncer from Jason Holder. Without much sting on a sleepy pitch, Dube found it sitting up in his slot, and pulled it away to the midwicket ropes. A full ball from over the wicket again found its way into Dube’s arc, and he carted it away between long-on and midwicket. That set things in motion.

Related Story: How India ran through a toothless West Indies to extend their unbeaten run – Almanack

Kieron Pollard’s military medium was dispatched for another six over midwicket: instead of stifling him for room, West Indies kept feeding him width and space to swing away. Pollard changed sides, but Dube’s baseball swings had found their rhythm, and off came another six. A hopeless full-toss, miles outside off, was slapped for a six over cover. And suddenly, Dube was sitting pretty at 46 off 23.

It’s said T20s are about small margins, and Dube had latched onto those spare bits from West Indies, capitalising on Pollard’s inert offerings to catapult India from 58-2 to 84-2 in the ninth over. Virat Kohli was egging him on at the other end, and when he crossed his maiden 50, Ravi Shastri’s smiling face had a look of contentment.

The move worked. Five games in, Dube might be unrefined, but his expressive batting does make you wonder what more could come. This was an innings that went some way to justifying the hype.