In a mouthwatering clash of titans, AB de Villiers, one of the game’s most feared batsmen trumped Dale Steyn, his South African teammate and fast-bowling genius – to get his team over the line in a league stage fixture of IPL 2012.

When Lalit Modi first dreamt up the IPL, this kind of battle must have been exactly what he’d imagined: the world’s premier fast bowler and the world’s most complete batsman going mano a mano in front of 40,000 delirious fans. Even better, they happened to be international teammates.

Deccan Chargers had scored 181-2 in their 20 overs thanks to an unbeaten 73 from Shikhar Dhawan and some fireworks at the death from Cameron White [45 off 24], but Bangalore’s reply appeared on course at 91-0 until a flurry of wickets put the brakes on and left them needing 39 runs from the final three overs. De Villiers was at the crease with nine from seven balls, but with Steyn set to bowl two of last three overs, it was Deccan’s match to lose.

The first delivery of Steyn’s over, the 18th, pitched on a good length at 147.3 clicks but de Villiers swatted it over mid-wicket for six. “Holy guacamole!” cried Danny Morrison, a man whose love for a DLF Maximum knows no bounds. Next came a middle-stump yorker which was squirted away on the leg-side for two, before de Villiers cleared his front leg and slogged a slower ball to the mid-wicket boundary.

With Steyn on the ropes, de Villiers sensed a knockout blow, clobbering a near-yorker over extra-cover for six with a shot that defied belief, before scooping a 142 kph length ball over his shoulder for four. He calmly dabbed the final ball of the over down to third-man to keep the strike. De Villiers had just taken the world’s finest bowler for 23 runs in an over.

With the equation now at 16 runs needed from 12 balls, the game was effectively won. De Villiers was a man in a hurry though, smashing Anand Rajan for three fours and a six in the space of five deliveries to finish on 47* from 17 balls. 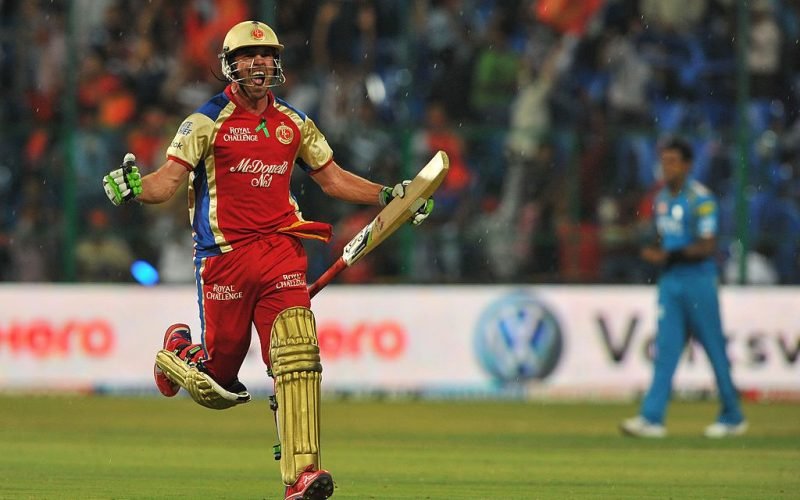 “I was actually quite scared of facing Dale,” said de Villiers as he picked up his Man of the Match award. “I know him pretty well, it doesn’t happen every day.”

He managed to fight through the ‘fear’ again in this year’s edition of the IPL, repeating the feat to hit Steyn for another 23 in an over – including three sixes – to see Bangalore home with a ball to spare in their group match against Sunrisers Hyderabad.