On the latest Sky Sports Cricket Podcast, the panel, including commentators David ‘Bumble’ Lloyd and Nasser Hussain, picked out the top 10 moments of the 30 years of cricket on Sky Sports, with England’s famous Test win in Karachi in 2000 finding a place on the list.

The result was historic for a number of reasons. It was Pakistan’s first-ever loss at the ground, ending a 35-game unbeaten streak in the city, and gave the Hussain-led side their first series win in Pakistan since 1961/62. It was achieved in dramatic circumstances. With both first innings only completed deep into the fourth day, the game seemed to be headed for a third-successive draw of the series. Instead, England skittled Pakistan out for 158 before facing a chase in fading light on the final evening.

Pakistan did their utmost to stall for time and reach a draw, but as night fell, England hit the winning runs to spark joyous celebrations. Sky Sports commentator David Gower summed up the moment: “Extraordinary scenes which, to be fair, many people on the ground will be unable to say they saw it.”

Lloyd, a former umpire himself, praised the resoluteness of umpire Steve Bucknor, who waved away Pakistan’s protests and saw through their attempts to waste time and overplay the effect the darkness was having. 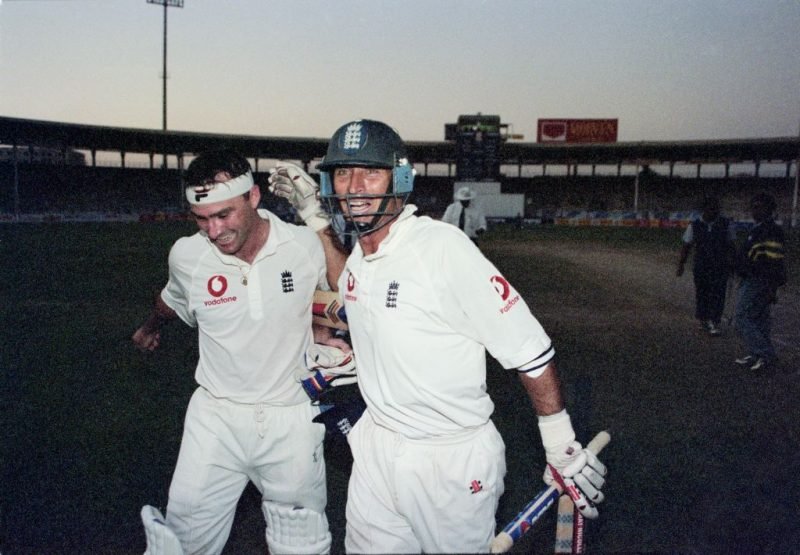 “They would never do that today, they would never play in that sort of conditions and light,” Lloyd said. “Pakistan knew they were going to lose the game and they got into delaying tactics as any team would, looking to delay down to eight and nine overs an hour. Steve Bucknor was the umpire and that was real old school umpiring as far as I was concerned because Steve Bucknor said ‘I know what you’re up to, we’re staying out here’.

“The fielders were running the wrong way, England were getting more frenetic, and Bucknor just kept them out there. They kept looking and appealing to him, but I thought it was a brilliant piece of umpiring. It was a great, dramatic game to work on, it must have been great for the players as well, but hats off to Bucknor because he kept them out there. They would never ever stay out in those conditions right now.”

“Everything Bumble says was spot on,” said Hussain. “We had Inzi running in the wrong direction at deep cover. We had Steve Bucknor saying to Moin, ‘Whatever you do, however much you slow this game down Moin [Khan, Pakistan captain], we are finishing it off.’ By the time we got upstairs on that balcony, it was pitch black, unbelievable scenes. For us it was just a boring Test series, but you can imagine it made good viewing at home, here in England.”