US president Donald Trump is yet to concede the election to Democratic challenger Joe Biden. Wisden India editor Manoj Narayan believes these cricket lessons about losing gracefully could give him the push he needs.

Even if you were living in a cave over the past couple of weeks, you’d have heard about it: Joe Biden was elected the president of the United States of America, and is set to assume office on January 2021. Remarkably, there’s a but after that sentence.

But … Donald Trump, the incumbent, is yet to concede the contest. “I WON THE ELECTION,” he recently tweeted, and variations of that post have been a constant over the last fortnight. Suffice to say Trump has a lot to learn about losing gracefully. And, for those wondering what any of this doing on Wisden’s pages, that’s where cricket comes in.

We have here a few instances from cricket that can, hopefully, help the president pick up a few tips on accepting defeat. We understand cricket is not something Trump understands, so we’ve simplified things as much as possible, and added a lesson for every story.

This one is for you, Donald.

Where better to start than with a New Zealander? The World Cup 2019 final was hard on everyone with an affiliation to the Land of the Long White Cloud, most of all the players, after a one-in-a-million boundary count loss following a tied Super Over – a ruling that has since come in for fair criticism. As captain, Williamson had the unenviable task of facing the media afterwards, being questioned by strangers about that loss, when all he’d have wanted was to put it behind him.

Williamson turned up at the press conference, and was grace personified. He had a smile almost throughout. He said the loss was hard to stomach, that his players were “shattered”. He admitted it was a shame that small margins had cost his team victory in a World Cup final. But that was it. There was no ranting and raving at the rule, there was genuine admiration for the winners England, and he offered them heartfelt congratulations. Gent.

Lesson: Express sadness – it’s not a weakness! – and accept that sometimes, things are not meant to be.

A guard of honour given by the West Indies to #Legend Sachin Tendulkar #ThankYouSachin #SRT200 pic.twitter.com/lAnrTqctwj

In 2013, when Tendulkar announced that his 200th Test would be his final one, it was immediately evident that the opponents for that historic occasion, West Indies, would be an afterthought. Throughout that series, the West Indies players had to put up with a nation of over a billion going over the top in its desperation to give a fitting farewell to its greatest sportsman. It must have, let’s be honest, been nauseating.

But if the West Indies players felt that way, they didn’t show it. They gave Tendulkar a guard of honour. When he was dismissed for a well-made 74 in his final Test innings, Daren Sammy, who took the all-important catch at slip, chose not to celebrate. They lost the series 2-0, losing both matches within three days, and it would have hurt. But they didn’t sour the mood by showing it. They had facilitated a grand send-off for India’s greatest sporting icon. Ego was set aside.

Lesson: It’s not always about you. 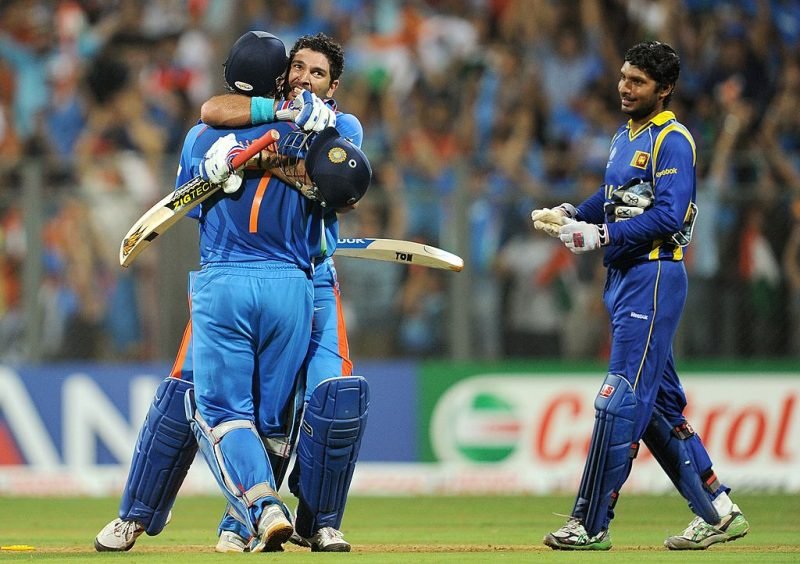 In Sangakkara’s smile is a lesson for Trump about losing

For many, the abiding memory of the 2011 World Cup final is that MS Dhoni six that clinched India the title, and ended 28 years of hurt. For some, however, it’s the image of Kumar Sangakkara, the defeated captain, smiling as Dhoni and Yuvraj Singh embraced each other. It was a curious thing to do, especially as the defeated captain, to smile as your victorious opponents embraced a few feet away.

Being one of cricket’s gentlemen, it was thought Sangakkara was just being appreciative of opponents whose victory was well-earned. However, earlier this year, when asked about his reaction by India off-spinner R Ashwin during a live chat, Sangakkara said the smile meant more. “Whether we win or lose, we [Sri Lankans] have this equilibrium on how to take a win or loss,” he said. “The smile hides a huge amount of sadness, of disappointment, of thinking of 20 million people back in Sri Lanka who had been waiting for this for so long, since 1996.

“So sometimes, the best way to take victory or defeat is to understand that that’s the way life is. Not every single thing goes your way. But the important thing is to be able to take that the same way.”

Lesson: Smile. As Sangakkara said, “not every single thing goes your way.”

The intensity of the India-Pakistan rivalry needs no retelling. It’s been the same for ages, and it was no different when Pakistan visited India in 1998/99 for the first time in 12 years, with fundamentalists in India threatening to disrupt proceedings. However, once the cricket got under way, it was immediately evident these were two evenly-matched teams going toe-to-toe. A low-scoring encounter, India somehow lost their last four wickets for four runs and were defeated by 12 runs in the end, despite a stunning century from Sachin Tendulkar, arguably the Little Master’s greatest Test hundred. The Pakistan players were delirious, the Chennai crowd in disbelief.

There was perhaps a fleeting moment when the security personal at the MA Chidambaram Stadium braced themselves for a tough evening. And then it happened. In unison, the Chennai crowd rose to their feat and applauded Pakistan, who took the cue and embarked on a lap of honour. The applause continued till they were done. It was an appreciative gesture that has gone down as one of the highlights of the India-Pakistan relations.

In a free association exercise, the name Ponting immediately brings to mind words like quality, determination, and, of course, ferocity. There aren’t many who played the game with the same hard-nosed approach as the long-time Australian captain. Even so, after South Africa’s classic chase of 434 in 2006, in what was then labelled the greatest ODI of all time – the 2019 World Cup final has taken that title since, hasn’t it? – Ponting was in absolute awe of South Africa and Herschelle Gibbs.

So much so that, when handed the Player of the Match award for his 105-ball 164, Ponting decided to share it with Gibbs, who had walloped a 111-ball 175 to give South Africa a chance of victory. “We had no defence mechanisms whatsoever against the way they were hitting the ball,” Ponting said at the time. It was a great Spirit of Cricket moment, but, in the larger scheme of things, it was so much more.

Lesson: A hard-nosed approach isn’t a hindrance to grace.