Jos Buttler will join Sydney Thunder for his second stint in the Big Bash League, having represented the Melbourne Renegades in 2013-14. Michael Hussey believes his ability and versatility to bat at the top or in the middle order will be an asset for the T20 franchise.

Lancashire and England’s swashbuckling wicketkeeper-batsman is likely to be available for the first six games of the T20 competition, which commences from December 19. He will then join England’s limited-overs squad for the series against Australia.

Sydney Thunder have also signed Australia’s Callum Ferguson and New Zealand’s Mitchell McClenaghan, and Buttler is excited by the prospect of working with ‘Mr Cricket’ and Thunder’s Director of Cricket, Michael Hussey. 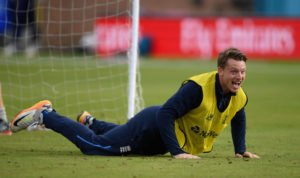 “I’m delighted to be part of Thunder. Mike Hussey is someone I’ve really admired and I’m really excited to meet him,” said Buttler. “I’ve played in the BBL once before, ahead of England’s last ODI tour to Australia. I’ve watched the competition go from strength to strength to become one of the best competitions in the world. The crowds are fantastic and there’s a big family emphasis which creates a great atmosphere.”

“He can bat at the top of the order like he does for the Mumbai Indians and also in the middle order,” Hussey said. “We’ve done a lot of homework and asked around and all the feedback we’ve heard is that he’s a fantastic character that will add a lot to the dressing room.”

Hussey insisted he had a “strategy in place” to cover for Buttler’s non-availability later in the tournament.