When Leicester City won the Premier League in 2016, they did so with a highly unfashionable 4-4-2 formation, at a time when midfield-threes were all the rage. Asked about how the champions managed to succeed by going against tactical trends, scout Steve Walsh said: “We did play a three – Danny Drinkwater in the middle, with Kanté either side of him.”

The joke was that N’Golo Kanté’s energy and dynamism was such that he effectively fulfilled two roles, freeing up the mercurial Riyad Mahrez to do damage elsewhere, allowing Leicester to see the benefits of both systems. And, in one very particular way, it reminds you of the Rajasthan Royals.

This year, Rajasthan were always going to have one major problem – balancing the side. With a wonderful group of batters led by Sanju Samson, they boast tremendous power and aggression; their bowlers, while slightly less eye-catching on paper, are varied, experienced, and broadly complementary. Tying them together however, is a tricky task.

Originally, Nathan Coulter-Nile offered something of a solution, with a combination of him and Ravichandran Ashwin at No.7 and No.8 offering a dash of depth with the bat, while still playing five frontline bowlers. Coulter-Nile’s departure due to injury, however, appeared to removed this option, with his obvious replacements offering less with the ball. The inclusion of either Daryl Mitchell or Jimmy Neesham would have asked too much of young finisher Riyan Parag’s part-time bowling.

Instead, Rajasthan have maintained a bowling-heavy balance, with Parag remaining a sneaky sixth bowler alongside those five frontliners, Sanju Samson accepting and managing the lack of batting depth which comes with that. The promotion and then retirement of R Ashwin against Lucknow Super Giants was an example of this, ensuring that Parag – powerful, but among the lowest averaging batters in IPL history – was never needed to bat for too long. A neat solution to the problem.

However, the more sustainable solution has been the presence and excellence of Jos Buttler. So far in the 2022 IPL, the Englishman has amassed 375 runs in six innings, with a strike rate of 157. He’s notched up two centuries, one against Mumbai Indians and another against Kolkata Knight Riders, as well as an unbeaten 70 against Royal Challengers Bangalore and a rapid 54 versus Gujarat Titans. In doing so, through the nature and extent of his brilliance, Buttler is making Rajasthan work. 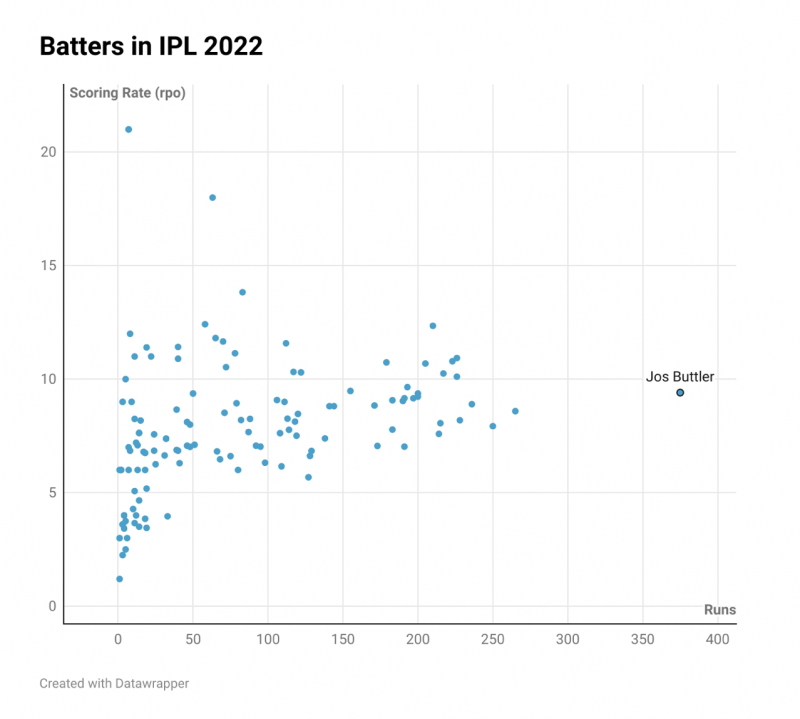 By batting through the innings but at a more than healthy pace, Buttler has allowed Samson and Shimron Hetmyer to dance around him, free of the need to anchor the innings but also of any real scoring pressure. Batters turning out the volume of runs which Buttler has managed in these opening rounds often have to sacrifice strike rate, and batters finding the top gears can often only manage cameos – both extremes demand that the others around them fill in the gaps. But for Rajasthan to make this bowling heavy balance work, to essentially play one fewer batter than ‘required’, someone needs to play two roles, and their star overseas has stepped up: Samson through the middle, with Buttler either side.

In many respects, we should not be surprised. Buttler’s initial IPL struggles in the middle order are often exaggerated, but ever since he was thrown up the order by Rajasthan at the end of 2018, he’s excelled in the role. He’s dominated in the Powerplay (averaging 57, scoring at 9.1rpo), but backed it up with controlled chaos through the middle (averaging 53, scoring at 9.5rpo). As the graphic below shows, Buttler is in a league of his own when it comes to matching effectiveness in the opening overs with quality through the middle; there are other candidates to play this challenging role for Rajasthan, but there are none better. 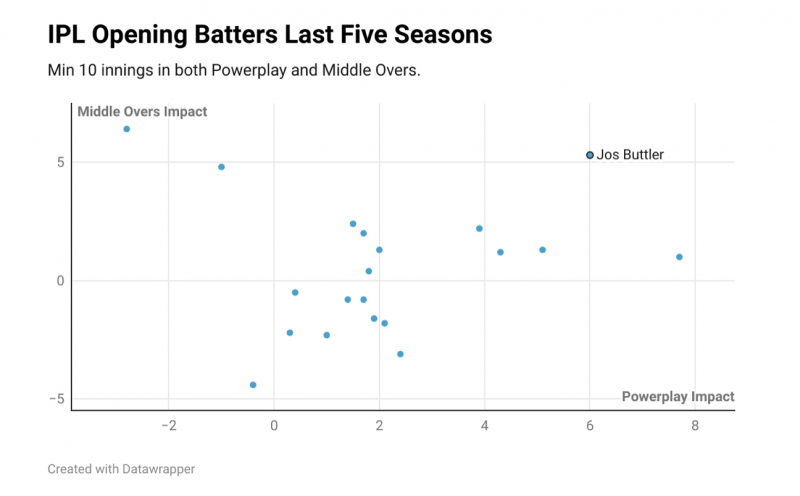 A key reason for that is the increasingly well-rounded nature of Buttler’s game. There are only eight players in the history of the IPL who have managed to record a positive Average Batting Impact against all five major bowling types: David Warner, Virender Sehwag, Rishabh Pant, Yusuf Pathan, Suresh Raina, Glenn Maxwell, Kieron Pollard, Hardik Pandya. As it stands, Buttler would be among that list of IPL greats but for a slim -0.1 ABI against leg spin – room for improvement, but his proximity to this greatness shows how difficult it is to plan a mode of attack against him.

While his prowess as a white-ball batter is not disputed by any right-thinking critic, Buttler’s actual record as an IPL opener can still catch you off guard – indeed, by CricViz Batting Impact, nobody’s done it better. This is ultimately a consequence of being able to play two roles, to be a threat in two phases of the game. 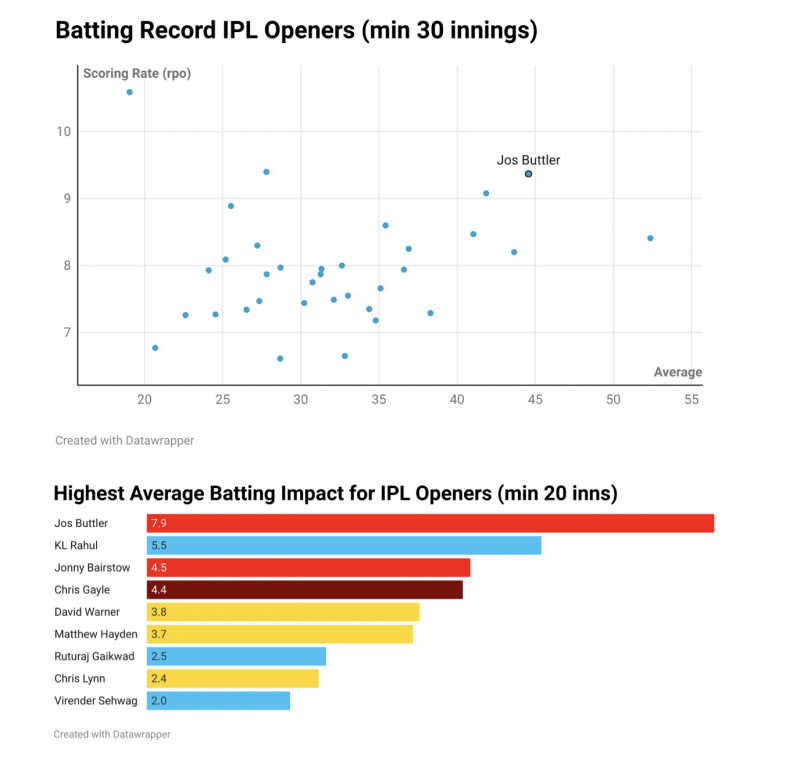 However, the caveat of ‘best opener’ somewhat buries the lede. According to that Batting Impact model, Buttler’s excellence goes beyond comparison with just other opening batters, with his ABI now above all established batters in the history of the tournament, barring only Andre Russell. 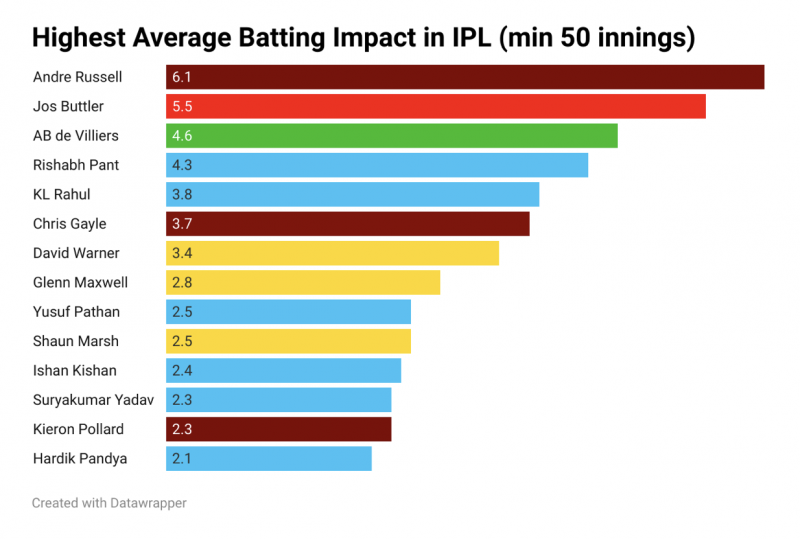 Not that it was poor before, of course. At the start of this season Buttler sat third on this list, comfortably nestled alongside the other star performers in recent IPL seasons, KL Rahul and Rishabh Pant. What’s most striking is that since the start of this blockbuster season, Buttler’s Average Batting Impact has gone past the great AB de Villiers.

Now, let’s all take a breath – nobody is saying Buttler is better than AB. The Englishman won’t come close to matching his cross-format genius, nor his legacy in India given the timing of de Villiers’ dominance, defining the first generation of the IPL. But away from the tit for tat of Chinnaswamy boosts and Powerplay runs – we’ll even throw AB an olive branch by looking away from T20Is – Buttler deserves to have that statistical comparison squarely laid out. Only one man in IPL history can beat Buttler’s average and his strike rate, and that’s arguably the greatest batter the game’s ever seen. That is quite something.

As he raised the bat on Monday afternoon against Kolkata, Buttler became the first English batter to score more centuries in the IPL than in Test cricket. While Buttler’s Test record is often dismissed in a rather sour tone – and he may still return to the longest format – that moment felt like an apt summary of where his career is headed. Buttler’s immediate future, and ultimately his legacy, is now about his white-ball game and the achievements and trophies that come with it.

While England will continue giving him opportunities to improve that, the IPL offers a different type of legacy. Buttler’s dual-role abilities allow him to step above the mass of high quality but more one-dimensional opening batters we often see in T20 cricket, ones who end up as iconic ‘franchise’ players but are quite hard to build success around. If the guys you are retaining on big money offer a high volume of runs based largely on Powerplay freedom and then middle-overs slow-downs, then you’re unlikely to get bang for your buck. Buttler, if he can maintain the form he’s shown over the last five seasons, offers you the stardom of a big, billboard-ready name, tied with the tactical dexterity of a role player. Once again, he finds himself doing two jobs.

Freed of the constraints of Test cricket, with one fewer plate to spin, Buttler looks like he’s capable of continuing his IPL excellence for years to come, burnishing his white-ball legacy as he does so. He’s done it for five years – if he can repeat the trick, then perhaps those AB comparisons won’t feel so mad after all.