Ahead of the 2021 IPL, CricViz analyst Ben Jones analyses the rise of Nicholas Pooran, one of the best T20 batsmen in the world.

You don’t know who the best T20 batsman in the world is. Nobody does.

When asked to give a name, most would look at the ICC rankings, for a prompt if nothing else. But it’s a flawed approach: these rankings only look at international performances, not domestic work. Where T20 differs from first-class and List-A is that much of the highest quality T20 cricket is played outside of the international arena. Anointing a player as the best T20 batsman in the world purely on the basis of their T20I form – excluding all runs in the IPL, PSL, CPL and BBL – is like awarding Best Picture after only watching the first 20 minutes of each film.

In the absence of an empirical method, becoming the Best T20 Batsman is about building an argument, a blend of statistical excellence and intangibles. As such, the accolade is constantly up for grabs in an informal tussle. It’s a tussle that has as much to do with recency as it does ability, one or two innings more than capable of throwing a player to the top of our collective imaginations, and rankings. You need the numbers, but it’s not just about them – it needs to feel right. Right now, Nicholas Pooran has as compelling a case as anybody else in the world.

The simple data tells us plenty of the story. In the last two years of domestic cricket, Pooran has flown. His scoring rate, 9.3rpo, has been matched by a batting average of 35, tying explosive hitting to consistent run-scoring, a combination which draws the eye of traditionalists and fanatics alike. Pooran’s effectiveness in T20 domestic leagues is almost unparalleled in the last year or so; since the start of 2020, his Average Batting Impact has risen to +4.9, the second-best of any player in the major leagues.

The breadth of your domestic record is clearly an indicator of your ability, but in T20, the IPL is still the pinnacle. If you strip away the bulk of the T20 calendar and look only at performances in the most major league, Pooran has still been mixing it with the absolute elite. Over the past two seasons the only men outperforming him are established Hall of Fame T20 batsmen: David Warner, Andre Russell, and Jos Buttler. 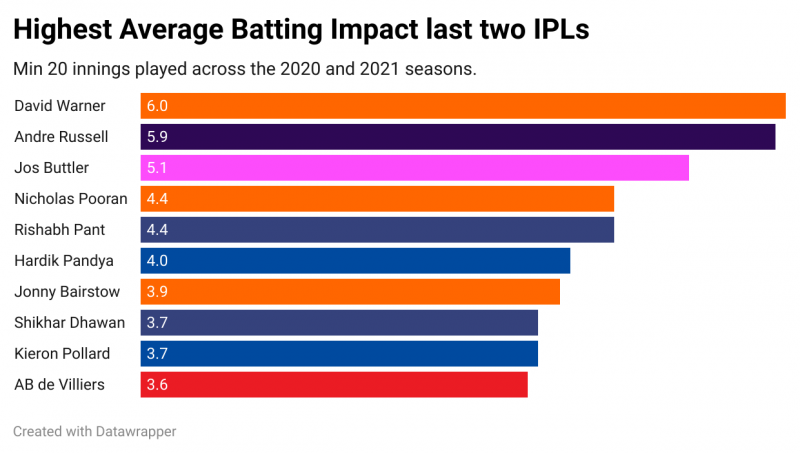 Now, to be standing alongside players of that quality is impressive enough. However, one point worth making is that while Pooran’s Impact compares to these legends, his role is rather different. That trio have clearly done brilliant things throughout the innings, but they do largely operate at either end: Buttler and Warner towards the Powerplay, and Russell towards the death. By contrast, Pooran’s best work comes through the middle.

The slowest phase of a T20 match is in Overs 7-15, against spin – that’s where Pooran dominates. Since becoming a regular in the Kings XI Punjab side, his record against spin through the middle is absurd: he scores at 10.3rpo (strike rate 172) while simultaneously averaging 103. Second quickest of anyone; second highest average. Nobody comes close.

This dominance against spin is certainly the most marked element of Pooran’s game, his trademark skill and the area where his record numerically excels. However, it also ties into another aspect of the argument, to the aura you need to invite the label of world No.1. That spin-hitting is just one of the ways that Pooran exists as a hyper-modern player who, inadvertently, sums up much of the modern game’s tactical and cultural trends. Hitting spin through the middle is a prized ability in the current strategic cycle of the game, given what tends to be bowled most often in that phase. It’s why the “enforcer” role is starting to come through, targeting strong players of spin with the sort of high pace you’d normally reserve for the top and tail. How Pooran deals with these enforcers will be his next big technical challenge, but it’s his excellence against spin which has forced their introduction. As much as anyone in the world, he’s changed how teams have to set-up their attack.

That modernity also comes through in where he’s proved himself. While his ODI numbers are outstanding, in T20Is Pooran has flattered to deceive. His quality has been proved almost exclusively in domestic leagues both at home in the Caribbean and overseas, and that is a route to recognition unavailable to previous generations. Away from the economics of the game, Pooran’s actual batting approach is at the cutting edge as well, given the obvious emphasis it places on six-hitting. Since Pooran debuted in T20, 22 players have hit more sixes than him, yet of those players, only one – Andre Russell – has recorded a better 4s:6s ratio than him. He is emblematic of T20 in 2021 both as an economic market, and as a sporting spectacle.

Even when we look more closely at Pooran’s approach against spin, we see his relationship with that most en vogue of T20 buzzwords, ‘the match-up’. Given the basic principles of spin match-ups (batsmen are better at hitting the ball spinning into them), left-handers are generally tasked with taking down left-arm orthodox and leg-spin bowlers, and Pooran does that better than almost anyone in the history of the format. Only one man scores faster against left-arm orthodox spin than Pooran, and that same man is the only one who scores faster against leg-spin. In both instances, Chris Gayle leads the way.

That sensation of being hidden behind another star is a familiar spot for Pooran. For him, there’s always been a bigger attraction nearby. During the West Indies’ 2019 World Cup campaign, only two men registered centuries: Carlos Brathwaite, with a breathtaking lone assault on New Zealand in Manchester which almost turned their tournament around, and Pooran himself in a dead-rubber against Sri Lanka. Yet during the campaign, discussions surrounding West Indies’ hopes of progression were dominated by the power and charisma of Chris Gayle and Andre Russell. The big, established stars of the West Indies T20 dynasty pull focus. Even among young Caribbean prospects, he was eclipsed until fairly recently by Shimron Hetmyer. Furthermore, during that World Cup century against Sri Lanka, many eyes were turned towards Rihanna on the West Indies balcony, rather than the man in the middle. In Kings XI Punjab colours, it’s been a similar story. KL Rahul is the leading man as captain and opener, and once again the hulking silhouette of Gayle pushes Pooran out of the picture.

And yet now, it feels like everything may be about to change. Pooran’s status has grown steadily over the past 18 months, his place within the internal hierarchy of each team he appears for improving with every tournament. He has built a statistical record that rivals anyone in the world, and has done so while operating at the tactical vanguard. There is only one element, one intangible that remains unfulfilled – and it comes back to that silhouette.

Gayle is without question the greatest T20 batsman the game has seen, and yet this IPL season, it’s the younger Caribbean left-hander who starts as the greater threat – if not the bigger star. Their physiques differ, as do their roles, but there are obvious parallels in terms of their destruction of spin and, increasingly, the regard in which they are held. While Pooran may not at present have the relationship with the crowd that Gayle boasts, he has the ability to match the Jamaican’s on-field achievements, both in individual and collective terms.

The other parallel is broader. Gayle’s brute force has defined the first two decades of T20 cricket, and while his statistical record stands alone, his obvious bond with the format and his presence in that West Indies dynasty intensified the aura that his record created. Pooran – for all the reasons we’ve outlined – has the opportunity to inspire similar reverence, to form as close an association with the format as Gayle’s, and to be the batsman who defines the next decade of T20 cricket. This year is the beginning of that journey.