CricViz analyst Ben Jones examines Andre Russell the bowler, who has worked to make himself even more valuable in T20 cricket.

Andre Russell is the king of the death overs. Few batsmen in the world strike fear into the heart of death bowlers quite like the Jamaican all-rounder, whose T20 prowess has been built on a remarkable ability to clear the ropes with powerful consistency. In the last three years, only two men – AB de Villiers and Eoin Morgan – have scored more quickly in the final overs of a T20 innings.

However, he’s had a quiet start to the 2021 IPL with the bat in hand. 5 (5) against Sunrisers Hyderabad in the opening match was followed by 9 (15) against Mumbai Indians, as Kolkata Knight Riders fell to an almost unbelievable defeat. While Russell is coming from a standing start, having played no cricket since a stretch with Colombo Kings back in December, he’s shown very little of the explosive form we expect from a man of his class.

And yet he’s still found a way to heavily influence games. In both of KKR’s matches, Russell has been Morgan’s designated death bowler, but it was in the Mumbai game where he most obviously came to the fore. In two overs at the end of the innings, Russell took five wickets for 15 runs, an almost unprecedented burst of wicket-taking threat; in the history of T20 cricket, only four other bowlers have taken a five-wicket haul bowling only two overs in the match.

Now, the Mumbai players Russell dismissed for this landmark were of varying quality. While he removed one of the greatest T20 hitters the game has ever seen in Kieron Pollard, he also came up against the rather more mercurial batting talents of Krunal Pandya, as well as the lower order operators Marco Jansen, Rahul Chahar, and Jasprit Bumrah.

Rather than the pedigree of batsmen he was faced with, what was rather more striking about the spell was that Russell had not been used in the innings at all until that point. He was given the clear and specific task of closing out the final overs. What caught the imagination of the fans and viewers was the whiplash from his complete uninvolvement, to his being directly responsible for dismissing half of the best T20 side in the world.

In terms of Russell’s recent deployment, it’s actually very much in line with how captains have approached his bowling; the start of last year saw a notable shift in Russell’s usage across the innings. More than ever before in his career, Russell’s bowling has been skewed to the end of the innings.

CricViz: Andre Russell is bowling more at the death than he has in his career before

It’s a clever way of using Russell’s attributes while protecting his now rather fragile body. While his average speed reached a peak of 138kph in 2015, in the last few seasons it’s still hovering around 135kph, despite those infamous knee issues. What has dropped off more pronouncedly, is his workload. Injuries have taken their toll on the Jamaican, but while the flame burns out quicker than it used to, it still glows almost as bright.

CricViz: Andre Russell is bowling less than before, but is still capable of reaching similar speeds

In other words, Russell is still capable of bowling with the pace one needs in T20 both to reliably hunt for yorkers, and to force batsmen back into their crease with the short ball and hard lengths. One way of utilising Russell’s tools would be through the middle overs, as an enforcer who could, fitness willing, come back at the death to continue their work. Yet that role places undue emphasis on his pace, and thus undue pressure on his body, while also underplaying his bowling nous and strategic (first-hand) understanding of death hitting.

It’s important to note – Russell has not become an elite death bowler. Since the start of last year, his death over economy rate is 9.6rpo, placing him almost exactly in the middle of the pack for regular death bowlers in that time. The overall death economy for this period is 9.2rpo, suggesting Russell is slightly worse than the average in raw number terms, while his average Bowling Impact for the phase (+0.9) suggests he’s marginally better than the average.

Yet it’s that strategic thinking which is shown in the most noticeable tactical aspect of Russell’s death bowling. In his five wicket burst against Mumbai, four of the wickets were right-handers dismissed from around the wicket, and three of those were from wide deliveries delivered on that angle. The previous night, we had seen Punjab Kings bowler Arshdeep Singh use a similar strategy when faced with a runaway train in the form of Sanju Samson, well set with a century to his name, dragging Rajasthan Royals towards victory. As a left-armer, he stayed over the wicket, and fired the ball full and wide, pushing the tramlines – certainly one way to stop a runaway train – and with the exception of one six, the tactic paid off.

It’s a tactic Russell has used a lot of late, since becoming a more strongly death-focused operator. Prior to 2020, when bowling to right-handers at the death Russell went around the wicket just 3 per cent of the time; since the start of last year, that has risen to 53 per cent. While the trendiest death bowling method is to hit hard lengths and take the ball out of the arc by going over it, the wide yorker works from a similar base (that modern batsmen are simply too effective in the slot for straight yorkers or slower balls to work well consistently) and also looks to remove the opportunity for batsmen to just hit in the slot.

In 2018-19 around 10 per cent of Russell’s death bowling to right-handers was wide outside the off stump, but since the start of last year that has shot up, to just over 40 per cent. The wide yorker is not an innovation by any stretch of the imagination, but combined with the unusual angle of release, the challenge posed is a very unfamiliar one for batsmen. 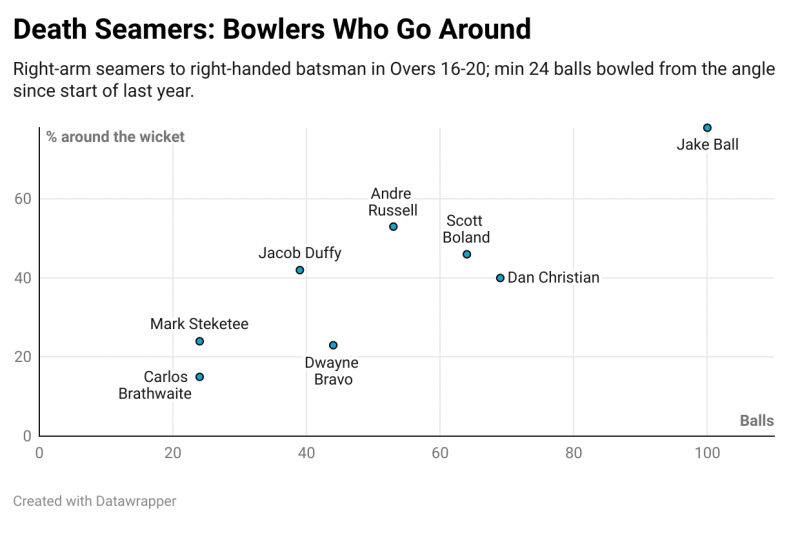 CricViz: Andre Russells angle makes him a different proposition as a death bowler

Around the world, English seamer Jake Ball has been the man to exploit that angle more than anyone else, but Russell’s in the pack just below him. It’s apt that Dan Christian, another man in that group and perhaps the most famous exponent of the tactic, is a teammate of Ball at both Nottinghamshire and more recently the Sydney Sixers, suggesting that discussions have taken place. Christian’s presence is also of note given that, in many ways, the Jamaican has turned into a deluxe version of the Aussie all-rounder.

Renowned for his T20 record, not just as an individual but for the medals he brings with him, Christian has a track record of winning domestic tournaments. While he is a good player, and undoubtedly brings quality to any side in which he’s involved, he isn’t transformative – but he nails the role of death hitter, and death bowler, in one man. He may only do those roles to a ‘replacement’ level, consistently providing ‘typical’ or ‘average’ performances, but Christian is doing so in roles that teams pay huge, disproportionate amounts of money for, allowing them to shift focus – and resources – elsewhere. Players who can reliably fulfill both of these roles are unusual, the only other prominent example being Chris Morris.

If that sounds like damning with faint praise for a superstar like Russell, it shouldn’t. For the Sixers, Christian’s death bowling allows them to use Ben Dwarshuis and Sean Abbott more liberally with the new ball. For Russell, the death overs are the period of the game where his bowling skills have maximum effect in the shortest time possible, but bowling there also frees up KKR’s flagship seamer – Pat Cummins – to be used elsewhere, in roles which suit him better. Against Mumbai, Cummins had already delivered his four overs (and taken two key wickets) before Russell had started warming up to bowl.

When your batting alone is enough to get you into any XI on the planet, minor tweaks to your bowling patterns probably aren’t at the top of your priority list. But for Russell, by adopting this around-the-wicket method from Christian, he’s been able to bowl more consistently in the death over phase, with obvious benefits for the rest of the bowling attack. He’s borrowed the bowling method – Eoin Morgan, and everyone else at KKR, will be hoping the knack for winning trophies follows just behind.