Suryakumar Yadav is one of the most consistent batsmen in the IPL. CricViz analyst Ben Jones on why he’s so much more than just The IPL Guy.

Nicknames are funny old things. Given easily and often, whether you’re a schoolchild or a professional athlete, they tend to hone in on a clear, straightforward quality – things you can spot from the stands, or in the brief exposure of television interviews – and make it an entire identity. Be it hair colour or height, accent or origin, athletes are reduced to a single trait.

For Suryakumar Yadav, it’s not different. A lilting, rising triptych of a name, has more often than not been reduced to the three most resonant sounds within it. S, K, and Y. SKY.

It’s fitting really, because this tells us something about the player as well as the man. Suryakumar is a man who, in the last few seasons, has been reduced from a complex, multi-faceted cricketer down to a representative figure, a cipher for a broader group of individuals, of men with similar sporting experiences. Take out the nuances, and you’re left with The IPL Guy.

In many ways, it’s fair enough. Suryakumar had, until a month ago, remained uncapped by the national side despite his obvious and extravagant talent. Personal problems, flawed interactions with key individuals, seemingly held greater sway than you’d expect in the meritocracy of professional sport. As such, the man excelling outside the system – excelling whilst actively excluded from the system – came to be something of a symbol for the talent which lay outside the international arena, and despite Suryakumar’s own age, for the next generation of Indian talent that was dominating the IPL.

And my, how he was excelling. Since the start of 2018 in IPL – since joining Mumbai – Suryakumar has averaged 39 and scored at 8.2 runs per over (rpo), or a strike-rate of 137. He has been the best performing member of a batting order which has won two of the three tournaments he’s been involved in. He has been the third-best performing Indian in the IPL for three years straight and yet, like the others ahead of him on the list, his place in the national side has never been secure – or even granted. 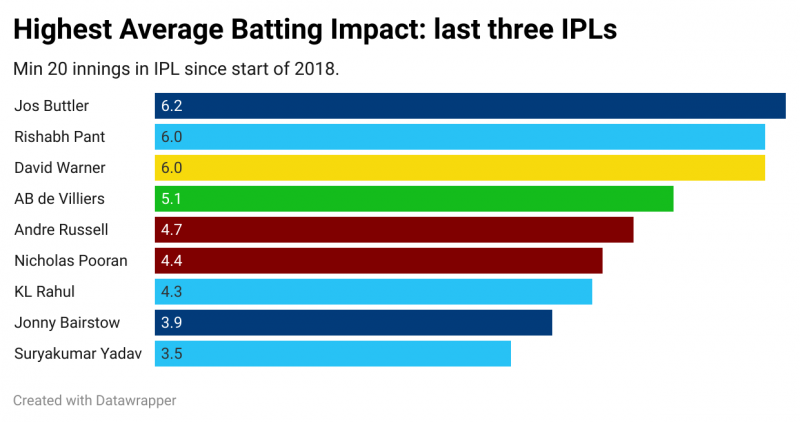 However unlike KL Rahul and Rishabh Pant, who have both suffered slumps in form at various points, Suryakumar’s performance has never wavered. The consistency he’s managed in the last five seasons is almost unmatched. Only two players have had a positive Average Batting Impact in each of the last five IPL seasons (min 50 balls faced): AB de Villiers, and Suryakumar Yadav. SKY is not as good as AB, but he has earned the right to at least be compared.

Suryakumar Yadav and AB de Villiers sit at the top

His consistency is shown elsewhere, not just in resisting slumps of form, but in being effective against all bowling types. In these last five seasons, Suryakumar’s recorded a positive Average Batting Impact against four of the five main bowling types, only slipping marginally below zero (-0.1) against leg-spin. In that time, the only batsmen who can equal or better that record are David Warner, Pant (both of whom are positive against all five bowler-types), and de Villiers (who is positive against four).

The key evolution in Suryakumar’s game is the rate at which he’s scoring. As with anything even remotely tactical in cricket, the idea of “intent” has already begun to be mocked, by those themselves intent on oversimplification of a subtle, nuanced format of the game.

But it is the intent of Suryakumar which marks him out from other players in that role, at other sides; he consistently tries to score quicker and places less value on his wicket, and he consistently manages to do so. Since joining Mumbai, his scoring rate has risen from 7.5rpo to 8.2rpo; against pace, from 7.7rpo to 8.6rpo. Yet rather than a happy accident, this is a direct consequence of his approach, his Attack Rating (a measure of overall attacking intent) rising from 160 in his first season at the Wankhede to 180 in the last two years. His willingness to attack is what underpins his improvement.

In particular, his willingness to attack early is key. Since moving to Mumbai, Suryakumar has scored at 8.2rpo at the start of his innings, substantially quicker than other players in similar roles. The only top-order batsmen who start quicker are Jos Buttler, who exists in a league of his own, and Sunil Narine who functions as a pinch-hitter. No Indian anchor starts with more aggression than Suryakumar and yet, as the graph below shows, he maintains control. His Timing Rating – in essence, a CricViz measure of control – is very high. Quick, elegant, controlled runs from the moment he walks to the crease.

The counter to that aggression is a classical technical base, one which allows Suryakumar to deal with the sort of red-ball threats which sort the wheat from the chaff in the shorter formats. Suryakumar’s quality against high pace has shone through in the last few seasons; since the start of 2019 he’s not been dismissed by a ball above 150kph, and has averaged over 50 against balls above 140kph. Against short-pitched bowling he’s able to average 37.33 and still score at 9.2rpo. His much-vaunted elegance is not simply something to be enjoyed, but reflective of the technical excellence which allows him to perform a hybrid role – part hitter, part anchor. His former role as a finisher at KKR – complete with ramps, scoops, and all the tricks – gives him a duality which few anchors can match.

And that’s what sits in SKY’s favour, really. As often as he’s been presented as the uncapped outsider, he is simply a modernised version of the player India’s hierarchy love more than any other. For those in charge of the Indian side, he’s the acceptable face of modern T20 batting.

The problem when you reduce a player to being a symbol of a movement, or merely emblematic of a wider trend, is that you can miss the specifics. All these nuanced changes that have happened within SKY’s game over the last few years are easily glossed over, unappreciated, if he simply exists as a means of discussing the quality of the IPL compared to the luxurious conservatism of the Indian national side.

It’s important to recognise the skill, and courage, that comes with being something different to the status quo, even if the difference is slight. When orthodoxy rules, heresy is where the innovation lies, where the interest sits. But it’s also important not to just group all players together, simply because they exist outside of the system. Suryakumar has made clear changes to his game, improvements in key ways, that have made him different not just to the men in the Indian XI, but to the others in IPL pushing for places.