From Albie Morkel’s famous onslaught against Virat Kohli to Hardik Pandya’s earliest impression – here’s a look at ten of the most breathtaking IPL cameos.

The campaign of Shane Warne’s Rajasthan Royals in 2008 remains a fairytale to marvel at. They consistently found ways of winning games from virtually impossible situations, and none was more stunning than their triumph over Deccan Chargers at Hyderabad. Riding high on Andrew Symonds’ 117*, the Chargers posted a mammoth 214-5, riding on Andrew Symonds’ 117*, and though Graeme Smith and Yusuf Pathan gave Rajasthan a good foundation, the Chargers seemed to have the match won after the latter’s dismissal in the 18th over.

In walked Warne, and after playing out a couple of dots, edged one off Shahid Afridi for a boundary. A quiet penultimate over from RP Singh meant 17 were needed off 6, which soon became 14 required off 4.

This was now Symonds v Warne, in each’s weaker discipline, but neither pulling any punches, and it was the leggie who came out on top. He smashed a low full-toss down the ground for a four before striking two glorious sixes, a hoick over midwicket and an inside-out lofted hit over extra-cover. The Royals had pulled off their 215-run chase. No other IPL team has bettered it since.

Perhaps the most famous of them all. With 43 required off 12 and with MS Dhoni gone in a chase of 206, it looked all over for CSK. Daniel Vettori tossed the ball to Virat Kohli, his deputy. Little could he be blamed for what was to follow; his other option, medium pacer Raju Bhatkal had been taken for 35 runs in his two overs while Kohli had conceded just eight from his first. Albie Morkel though, the hero, would later admit that he was pleasantly surprised.

Back to that humid Chennai eve in 2012. The left-hander edged one past his leg-stump for four before launching one flat downtown for a six. Kohli shortened his length and the outside edge took it past short third-man for another four. Kohli then changed the line of attack to over the wicket, and that only worsened matters. Two of the next three went soaring over long-on, one into the stands, the other almost striking the roof. Danny Morrison could barely control his excitement in the commentary box. 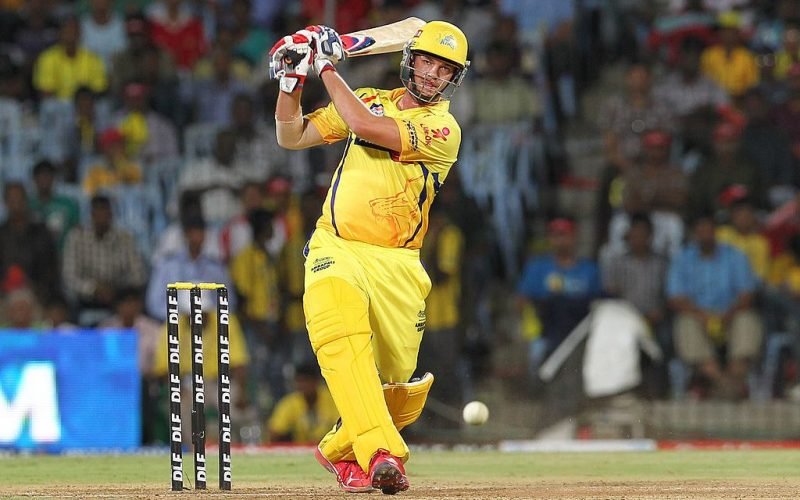 Morkel eventually holed out to sweeper cover in the final over, leaving CSK to get 14 off 4. Bravo and Jadeja ensured that Morkel’s heroics didn’t go in vain. Kohli would take the ball only three more times in the next seven editions of the IPL.

The local heroes, Sachin Tendulkar and Rohit Sharma had put on a quick 128-run stand for the second wicket to put the Mumbai Indians in command in a chase of 174. CSK though clawed their way back, thanks to a Faf du Plessis stunner at extra cover to get rid of Tendulkar. 134-1 became 158-7 by the end of 19th over, with 16 now required off six.

Dwayne Smith, playing his first IPL game in two years, had already struck a six off Dwayne Bravo. He was now up against Ben Hilfenhaus and the Aussie quick removed Lasith Malinga while just conceding two singles off the first three deliveries. His bowling analysis at this point: 3.3-1-20-2. Match status: 14 required off 3.

Dwayne Smith’s bottom hand takes over – a full-toss is smashed flat over long-on for a six before another one rockets over the bowlers head for a four. It’s four required off the last ball with the Wankhede crowd having rediscovered its voice. Hilfenhaus finally manages to pitch one, and it’s at most an inch too short. No matter, Smith carves it straigh for another four to complete the most thrilling of run-chases.

Towering hits, missed chances and a thrilling climax – one of the most famous games in IPL history, the final league game of the 2014 season had it all. It’s fondly remembered for Corey Anderson’s blitz and Aditya Tare’s winning hit, but it was Rayudu’s partnership with Anderson that was the crucial passage.

Mumbai needed to chase 190 in 14.3 overs to qualify to the play-offs on virtue of the net run-rate. They still needed 82 off 31 when they lost skipper Rohit Sharma for 16. Rayudu, who walked in next, would’ve been run out without facing a ball had Dhawal Kulkarni not spilled the chance at the bowler’s end. The right-hander began with a flourish, striking four boundaries off his first five deliveries – the last three coming back-to-back off Shane Watson. The first two were slapped over the inner ring on the off-side, before the bowler fired one on his legs from round the wicket, only to be taken to the cow-corner fence.

Anderson’s clean striking kept MI in the hunt, and it came down to 8 off 2 with Rayudu up against Faulkner. A leg-stump full toss was tonked for a maximum over fine-leg, before his run-out off the next ball had seemingly eliminated Mumbai. Rayudu, shattered after the dismissal, could barely drag himself from the field. Cue all manner of calculations, which ended with the realisation that the extra runs from a boundary would give Mumbai just the run rate boost they needed.

Tare walked in, cool as you like, and nailed one over fine-leg, and the Wankhede witnessed the most insane of celebrations.

He’s produced many a scintillating knock over the years but this one stands out for the deconstruction of one of the format’s great bowlers. Mumbai Indians’ disciplined bowling had restricted Chris Gayle to a 24-ball 10 and Kohli to a run-a-ball 18. RCB, chasing 210 were virtually out of the contest at 62-3 in the 11th over. In walked AB, with 148 needed of 57. The next four overs were all about him.

The first delivery was placed neatly, racing to the backward point fence. The next went sailing over mid-off before he unleashed an upper-cut over the keeper. 14 off 3. “Ladies and gentlemen we’re ready to take-off,” quipped Harsha Bhogle on air.

Then began the real onslaught, against Lasith Malinga, arguably the greatest T20 bowler ever. Malinga went length and AB deposited him over long-off. Then he went slower, and AB tonked him over midwicket, making a mess of the Chinnaswamy roof. Finally he went full, twice, and AB disdainfully reverse-swept him over the keeper’s head before thumping him past extra cover.

It was a 22-year-old Jasprit Bumrah who provided the visitors with the decisive breakthrough as de Villiers picked out Kieron Pollard at long-on. MI eventually eased to an a comfortable 18-run win but with those 20 minutes of unreal carnage, ABD gave the home crowd plenty to cheer about.

It looked like being another of CSK’s routine home wins on a slow Chepauk track until a young hard-hitting all-rounder rewrote the script.

Mumbai, chasing 159 to win, needed 30 off 12 with Rayudu and Hardik Pandya at the crease. Dhoni chose Pawan Negi over his senior seam bowling options in Ashish Nehra and Mohit Sharma for the 19th over. The left-arm spinner had conceded just 10 off his first three overs while Nehra and Mohit had conceded 64 between them from five and the slowness of the track meant Dhoni’s judgement seemed sensible. Instead Negi, who’d himself blasted 36 off 17, got a taste of his own medicine.

Hardik launched three of the first four balls of the 19th into the stands before Rayudu tonked one towards the sight-screen to make it 25 off the over and that was it. Mumbai clinched it with four balls to spare

A week later, Hardik would blast an unbeaten 61 off 31 against Kolkata Knight Riders just to show us that his innings in Chennai wasn’t a fluke. India’s hunt for a seam-bowling all-rounder finally looked like coming to an end and nine months later, he would get his debut cap at the Adelaide Oval.

7. The teenager teaches the titans a lesson

A 17-year-old Sarfaraz Khan overshadowed Virat Kohli and AB de Villiers’ brilliance in an innings which lasted no more than three overs. The experienced pair had added 157 in 14.3 overs to set up the platform for a strong finish in their 2016 IPL opener against Sunrisers Hyderabad. Mustafizur Rahman however, removed de Villiers and Watson in quick succession to keep SRH in business.

Sarfaraz chose this as his moment, taking Bhuvneshwar Kumar, one of India’s best, to the cleaners. The right-hander struck four fours and a six in the penultimate over – a couple were a product of old-school class, driven firmly on the off-side, while the rest were all about modern-day innovation. A six was quite remarkably scooped off his legs over third-man for a six. Next over, he swept one off the Fizz over long-leg and later got one past square leg to power RCB to 227-4, a total that would give them a solid 45-run win.

Who do you think can solve RCB’s death-bowling woes?

In the biggest game of them all, Ben Cutting made his first major impression in the IPL with a stunning all-round show. In a season that saw huge totals being chased for fun, Sunrisers knew they would need a big total against a power-packed RCB batting line-up to give themselves a chance. David Warner and Yuvraj Singh had played their parts but SRH seemed like losing their way as the innings neared its close.

Ben Cutting, having faced just 25 deliveries from four IPL innings till that point, rose to the task in spectacular fashion. The first three deliveries he faced were dots, including a mix-up that sent Naman Ojha back to the hut. He soon took Watson for a six over midwicket to get himself going. The penultimate over from Chris Jordan yielded 16, giving the Sunrisers some momentum. The last over turned out to be a game-changer.

Watson, Kohli’s most reliable seamer that season, was taken to the cleaners with Cutting striking three sixes and a four. The second off them – a full-blooded smash off a waist-high full toss – went out of the stadium and was recorded at 117 metres, the longest hit of the season. SRH finished at 208-7 and Cutting later took the key wickets of Chris Gayle and KL Rahul to dent RCB’s chase. Warner’s men eventually took the title clash by right runs.

A game-changer with the ball, Rashid Khan has shown that he’s no mug with the bat either, putting on some fine finishing hands in T20 leagues around the globe. In the second Qualifier of the 2018 edition, the Sunrisers looked good in their first innings at 113-3 in 15 overs before a mini-collapse. They lost three good finishers – Shakib, Deepak Hooda and Carlos Brathwaite – in quick succession, but they still had Rashid.

His first two hits were streaky – an outside edge past the keeper and a half-timed smash that burst through sweeper cover for a six. Then those magical wrists took over. A full and wide one off Shivam Mavi was sent deep into the stands on the off side, before 24 came off the last over from Prasidh Krishna. The first six was one to remember.

Later that evening he took two catches in the outfield, inflicted a run-out and dismissed Chris Lynn, Dinesh Karthik and Andre Russell. How’s that for a complete package?

Andre Russell has long been the scourge of the RCB bowling attack and the most lethal of his cameos came last year in Bangalore, when he single-handedly snatched a result that at one point seemed beyond reach.

Do you think Russell can break Chris Gayle’s IPL record of 175*?#IPL2020https://t.co/yNeLDI9gpz

RCB needed 54 off 18 when Russell was joined by young Shubman Gill in a run-chase of 207. Russell knocked off 47 of those in 11 balls to see KKR home with five balls to spare.

It all started against the gentle medium pace of Marcus Stoinis, as Russell slapped a couple into the stands. Next in sight was the experienced Tim Southee and the results were no different. The New Zealander kept missing his length and Russell just kept clearing his leg and smashing them over the ropes. The over analysis: 1, 6, 6, 6, 4, 6. The scores were tied, and Gill tucked one for a single just to confirm that there existed other ways of scoring runs.