There was a comical moment during the clash between Royal Challengers Bangalore and Chennai Super Kings on Sunday, October 25 when Ambati Rayudu delayed proceedings with what the commentators thought was an extended bathroom break due to an upset tummy.

It happened after the 13th over of CSK’s chase, when the teams took a ‘strategic time out’. For Rayudu, who was on a well-made 25-ball 38 at the time, the strategising seemingly involved a quick trip to the facilities. Unfortunately for him, it turned out to be not that quick.

As the cameras panned to the field after the allotted interval time, the only evidence of Rayudu to be seen were his pads and helmet, which he had left in the middle before going off. “We’ve got a missing player, that’s what it is,” said the commentator. “We’ve got no Ambati Rayudu. He’d left the field, we assumed for a bathroom break. 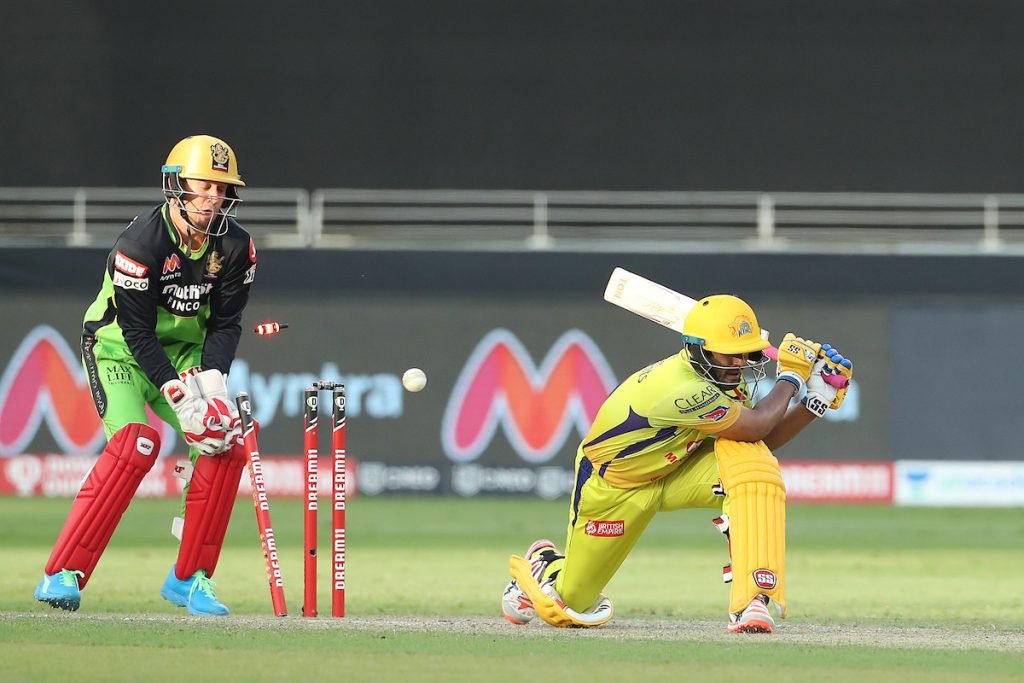 “Yep, upset tummy, I reckon. It’s time, but there’s still no sign of him!”

Rayudu eventually returned to the field, looking a bit tired, raising a hand in general apology. As he strapped on his pads and helmet, AB de Villiers, the RCB wicketkeeper, was seen chatting with him, breaking into smile gradually. Soon, both Rayudu and de Villiers were having a full-blown laughing fit, the former looking a bit embarrassed.

“They’re having a laugh about it, aren’t they,” said the commentator in glee. “I think they all know what happened! Poor Ambati Rayudu – I think everybody knows now!”

The break perhaps helped his tummy, but it didn’t do him any favours on the field – he was dismissed on the second ball he faced thereafter, attempting to sweep a leg-break from Yuzvendra Chahal, completely missing it, and being cleaned up.

The wicket didn’t really affect CSK – the match was in the bag by that point as they needed just 33 runs from six overs – and Rayudu was perhaps relieved to get off the field, and pop back into the bathroom at leisure this time.

Cricketers have often had trouble with ill-timed bathroom breaks. Just last year, in Abu Dhabi during the ICC T20 World Cup Qualifiers, Nigeria’s Sulaimon Runsewe had the audience in fits of laughter as he suddenly ran off the field in an almighty rush, leading to much confusion among all concerned, till he peevishly walked back in to take his post again.

There have also been instances where players decide the best course of action was to, well, just go right there on the field, like Australia captain Tim Paine during the fourth Ashes Test last year, when he soiled himself. “It was number two,” he would later reveal.